The Ant and the Grasshopper...

One of Aesop's fables is “The Ant and the Grasshopper”.  Most of us over a certain age learned about this fable in school, or perhaps even read it as an adult.  Wikipedia summarizes the original fable like this:


The fable concerns a grasshopper who has spent the warm months singing away while the ant (or ants in some editions) worked to store up food for winter. When winter arrives, the grasshopper finds itself dying of hunger, and upon asking the ant for food is only rebuked for its idleness. The story is used to teach the virtues of hard work and saving, and the perils of improvidence. Some versions of the fable state a moral at the end, along the lines of: "Idleness brings want", "To work today is to eat tomorrow" or "It is best to prepare for the days of necessity".


My mom came across a slightly updated version:


The ant  works hard in the withering heat all summer long, building his house and laying up supplies for the winter.

The grasshopper thinks the ant is a fool and laughs and dances and plays the summer away.

Come winter, the shivering grasshopper calls a press conference and demands to know why the ant should be allowed to be warm and well fed while others are cold and  starving.

CBS, NBC ,  PBS, CNN, and ABC show up to provide pictures of  the shivering grasshopper  next to a video of the ant  in his comfortable home with a table filled with food. America  is stunned by the sharp contrast.

How  can this be, that in a country of such wealth,  this poor grasshopper is allowed to suffer so?

Kermit the Frog appears on Oprah with the grasshopper and everybody cries when they sing, 'It's Not Easy Being Green.'

Acorn stages a demonstration in front of the ant's house where the news stations film the group  singing, 'We shall overcome.'  Rev. Jeremiah Wright then has the group kneel down to pray to God for the grasshopper's sake.

Nancy Pelosi & Harry Reid exclaim in an interview with Larry King that the ant has gotten rich off the back of the grasshopper,  and both call for an immediate tax hike on the ant to make him pay his fair share.

Finally, the EEOC drafts the Economic Equity & Anti-Grasshopper Act retroactive to the  beginning of the summer.

The ant is fined for failing to hire a proportionate number of green bugs and, having nothing left to pay his retroactive taxes, his home is confiscated by the Government  Green Czar.

The story ends as we see the grasshopper finishing up the last bits of the ant's food while the government house he is in, which just happens to be the ant's old house, crumbles around him because he doesn't maintain it.

The ant has disappeared in the snow.

The grasshopper is found dead in a drug related incident and the house, now abandoned, is taken over by a gang of spiders who terrorize the once peaceful neighborhood.

Moral of the modern version?

Be careful how you vote next year.

Amen to that!
Posted by Unknown at (permalink) 4:33 AM No comments:

Via my mom.  I couldn't figure out who originally said or wrote this.  Recently it's been attributed to a contest at Texas A & M, but I'm pretty sure that's wrong.

In any case, here it is – the definition of “political correctness”:


Political correctness is a doctrine, fostered by a delusional, illogical minority, and rabidly promoted by an unscrupulous mainstream media, which holds forth the proposition that it is entirely possible to pick up a turd by the clean end. 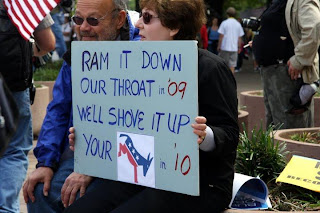 Great sign, seen at a tea party.  Via my cousin Mike D.
Posted by Unknown at (permalink) 4:17 AM No comments: