SEALs: Obama Has a “Trust Deficit”

Posted by Unknown at (permalink) 5:24 AM No comments:

Via Bruce Kesler at Maggie's Farm:


A man on his Harley was riding along a California beach when suddenly the sky clouded above his head and, in a booming voice, God said, 'because you have tried to be faithful to me in all ways, I will grant you one wish.'

The biker pulled over and said, 'Build a bridge to Hawaii so I can ride over anytime I want.'

God replied, 'Your request is materialistic; think of the enormous challenges for that kind of undertaking; the supports required reaching the bottom of the Pacific and the concrete and steel it would take! I can do it, but it is hard for me to justify your desire for worldly things. Take a little more time and think of something that could possibly help mankind.'

The biker thought about it for a long time. Finally, he said, 'God, I wish that I, and all men, could understand women; I want to know how she feels inside, what she's thinking when she gives me the silent treatment, why she cries, what she means when she says nothing's wrong, why she snaps and complains when I try to help, and how I can make a woman truly happy.

God replied: ‘You want two lanes or four on that bridge....?"

Amen, brother...
Posted by Unknown at (permalink) 5:20 AM No comments:

Dave Carter, one of my favorite regulars over at Ricochet, has a fine rant about Obama today.  He concludes with this sub-rant about the significance of this particular election:


This election, certainly the most significant in our lifetime, is not about "revenge," as the President so boorishly announced, nor is it about moronic thugs holding their pants up long enough to threaten riots. It's about 9,000 coal mining jobs lost in the last month alone. It's about 48 million people on food stamps, and 23 million people unemployed. It's about a work force that is smaller now than when Barack Obama was inaugurated. It's about a 14.3 percent unemployment rate in the black community. It's about a new IRS requirement that will take effect in 2014, requiring all taxpayers, in the words of sworn testimony, to, "…file their tax returns reporting their health insurance coverage, and/or making a payment." It's about the evisceration of our national defense and, in the aftermath of the Benghazi attack, troops who no longer trust their commander in chief.
AngryAmericanFreedom

It is ultimately a referendum on us, and it's about what kind of country our children and grandchildren will inherit. It's about whether they will be free men and women, freedom here being defined differently than the progressive's definition which stipulates that one must be freed from want or fear through the dictates of centralized planners. History, however, shows that the only path to liberation from want or fear is the path of individual sovereignty. Those in the northeast who chose the liberal path now go hungry, and cold, and fearful, while their government masters flail about, desperately seeking to free the private sector from the onerous rules and obstacles that they imposed. We see now what the Founders knew over two centuries ago; that free people and free markets are the surest means to freedom from want and fear, and that centralized government control over a nation is the surest path to despair, want, fear, and servitude. It's about Liberty. It's about We the People, endowed with unalienable rights, being the masters of our lives and our government instead of the other way around. It's time to reclaim the American ideal.

Oh, do go read the whole thing!
Posted by Unknown at (permalink) 5:17 AM No comments:

We occasionally see lenticular clouds over our local mountains.  A particuarly good display hereabouts might have 3 layers.  Look at these, from near Mt. Rainier!  Via APOD... 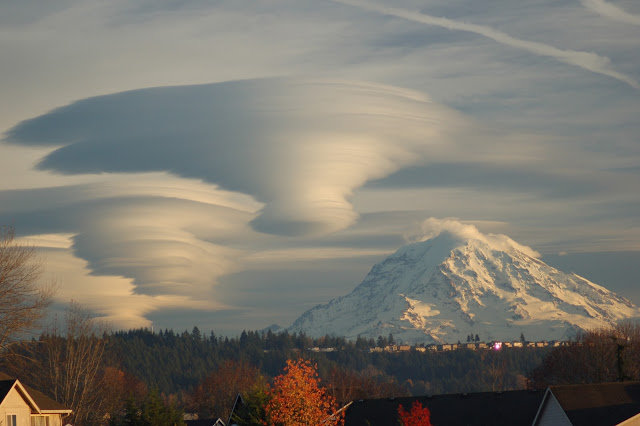