Our neighbor just called to say that two local dogs have wandered into her yard.  One looks a bit like an all-white St. Bernard, the other like a black-and-white cattle dog.  Both are friendly; one looks like it may have broken loose from a leash (perhaps thunder-frightened?).  If these sound like your dogs, please drop me a line (email address is in the sidebar at right), or comment on this post.  Either way, I'll put you in touch with my neighbor.

Update: The two doggies have been reunited with their owners.   The way it happened is a great story of neighborhood.

My neighbor who found the dogs got the phone number for Paula C. from me.  Paula lives just down the road from us, and operates a kennel and dog training facility.  She's also a long-time resident of Lawson Valley, and knows just about everybody here (and most especially she knows their dogs).  Unfortunately, Paula didn't know these two doggies.  Paula called everyone she knew, but none of them knew of these two dogs either.  This was shaping up to be a story with a sad ending...

Fast forward a few hours.  Paula was at her gate, shoveling the rainstorm's mud out from underneath her gate, so she could open it and leave.  While she was working, a car drove slowly by, and the driver hollered to ask her whether she'd seen a couple of lost dogs - a big white one, and a small black-and-white one.  Paula sent them up the hill to see my neighbor, who still had the dogs – and the dogs were reunited with their worried owners.

Turns out the owners live about a mile away.  They weren't home when the dogs got loose, but the thunderstorm happened during that period, so I'm thinking my guess was a good one...

I love happy endings like that!
Posted by Unknown at (permalink) 2:52 PM No comments:

Via a fellow slide rule collector who wishes to remain unnamed:

A public school teacher was arrested today at John F. Kennedy International Airport as he attempted to board a flight while in possession of a ruler, a protractor, a compass, a slide-rule, and a calculator.

At a morning press conference, the Attorney General said he believes the man is a member of the notorious 'Al-Gebra' movement. He did not identify the man, who has been charged by the FBI with carrying weapons of math instruction.

'Al-Gebra is a problem for us', the Attorney General said. 'They derive solutions by means and extremes, and sometimes go off on tangents in search of absolute values. They use secret code names like 'X' and 'Y' and refer to themselves as 'unknowns', but we have determined that they belong to a common denominator of the axis of medieval with coordinates in every country.'

As the Greek philanderer Isosceles used to say, 'There are 3 sides to every triangle'.

When asked to comment on the arrest, President Obama said, 'If God had wanted us to have better weapons of math instruction, he would have given us more fingers and toes..'

White House aides told reporters they could not recall a more intelligent or profound statement by the President.

It is believed that the Nobel Prize for Physics will follow.

Posted by Unknown at (permalink) 5:16 AM No comments: 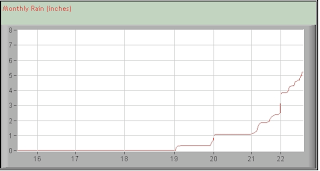 So far our four-day storm total is 5.24 inches (133 mm).  As you can see on the chart at right (click to enlarge), we received over an inch (25mm) yesterday and last night, and the rain continues as I write this.

I was awakened several times last night by rain and hail pounding on my bedroom window – we had gusty winds to 15 MPH (about 20 kph) from the southwest, and several thunderstorm cells passed right overhead.  Two of them had powerful lightning strokes, causing very loud thunder (one of our dogs, Lea, is terrified of lightning, and spent hours quaking, pressed hard up against me on the bed).  As if that wasn't enough, my weather radio was alarming every 15 minutes or so, to tell me of a new threat the NOAA wanted to warn me about.  All in all, it wasn't a good night for sleeping...

But no damage was done, so far as I could tell with my flashlight.  And we've got a lovely start to the rainy season, with nearly 11 inches already on the ground.

The wildflowers in the Anza-Borrego ought to be spectacular this year.

Yesterday evening, driving home from work, I saw the streams in Lawson Valley in full flood.  Last night's rains should drive them even higher, perhaps to the highest levels I've yet seen in my ten years out here.  I've heard stories from long-time residents about much higher floods washing out bridges; hopefully that is not happening to us!
Posted by Unknown at (permalink) 5:06 AM No comments:

A Democratic Insider's View into the Sausage Factory...


I believe President Clinton provided some crucial insight when he said, "people would rather be with someone who is strong and wrong than weak and right." It's not that people are uninterested in who's right or wrong, it's that people will only follow leaders who seem to actually believe in what they are doing. Democrats have missed this essential fact.


Go read the whole thing, it's fascinating...
Posted by Unknown at (permalink) 4:56 AM No comments:

Now this is just plain cool.  I particularly like the clever way they came up with to make the thing aimable.  Every other proposal for similar technologies (such as magnetic rail guns) required enormous fixed infrastructure that would permit launching payloads only into a very small range of orbits...
Posted by Unknown at (permalink) 4:54 AM No comments:

Air America is Put Out of Its Misery...

Several years ago, Al Gore famously helped found “Air America”.  Its objective was to bring quality liberal talk radio to the airwaves to compete with the then (and now) fabulously successful hordes of conservative, libertarian, and independent talk radio shows.  The idea was twofold: to help get the liberal (or “progressive”) message out, and to make a profit.

Air America failed dismally on both counts, from the very beginning.  Though they aired a fair number of liberal talk shows, their audiences were always small – and they've been shrinking for the past few years, even during the Obama campaign when you might have thought interest would be particularly high.  Not so much.

Yesterday the death knell rang; Air America filed for bankruptcy and ceased all on-air operations.  They are dead.

At the same time, talk radio is by far the most profitable and fastest-growing segment of radio in the U.S.  Nearly every day, it seems, a radio station switches from the traditional “disk jockey” format to talk radio, for the simple reason that the audiences on talk radio dwarf those on music stations – and therefore so do the ad revenues (which of course is how radio stations make money).

It fascinates me that despite an earnest, well-funded attempt, liberal talk radio was an abject failure.  One is tempted to say that the failure must mean there aren't many liberals, but clearly that's not the case.  Other possibilities I can think of:
Anybody got any better ideas?
Posted by Unknown at (permalink) 4:52 AM No comments:

Therein lies the rub.  Homeopathic medicines are not drugs under U.S. law.  When the FDA was formed, homeopathic medicines were specifically excluded (along with a few other things, but those are stories for another day).  This was a political accomodation made to get the legislation passed, and the decision has never been revisited.

Homeopathic “medicines” can make whatever claim they want to about their efficacy.  The FDA does not check them, nor does anyone else.  The only restriction or regulation on homeopathic medicines is that they can't be dangerous – but there's not much chance of that, as they have virtually no active ingredients.

While the truth about homeopathic medicines is widely known, and information about them is readily available, there are still millions of people who swear by their usefulness, believe in their efficacy, and spend billions of dollars ever year on them.  That completely blows my mind.  Spending money on homeopathic medicine is like burning money, but without the entertainment value.

The British Homeopathic Society describes how homeopathic medicines are made.  If you have even the slightest regard for science, this should be enough to convince you of their fraud.  There's more stuff, equally ludicrous, elsewhere on their site.  Here Matt Parker, writing on the London Times, relates his introduction to homeopathic medicine.  And here's a nice little skit pointing out the absurdities of homeopathic medical “practice”: