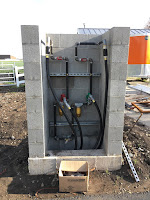 Paradise ponders, filling stations, muddy dogs, and wet weather ahead edition...  Well, the guys were here on Wednesday working on our filling station, and now the interior plumbing is ever-so-close to being finished.  All that's missing now is a piece of channel steel to hold the upper pipes firmly in place no matter how hard we tug on the hoses, and a wooden assembly (which I'll build) to hold the nozzles.  On the other end of the plumbing, they have yet to connect the pipes to the tanks; I'm expecting that to happen today.  Yesterday I took all the measurements of the front opening, drew up a diagram, and sent it off to Lazy K Wrought Iron to get a quote for them to make us a door.  The day before I sent off the specifications for a railing on our sun room steps, and the stanchions for our deck railing.  We're going to keep those folks busy for a while!

Thursday we got most of an inch of rain, mainly in the morning.  That means our property is muddy, even where there's grass, as the ground was already completely saturated from past rains.  The dogs this morning provided the proof (as if we needed any): when I let them back in after their morning outing, they were all little mud-balls.  Now our forecast (click left to embiggen it) shows an entire week with good chances of precipitation.  If you add all those days up, that's well over an inch of additional rain coming.  Man, we're going to be wet!  All that precipitation will fall on saturated ground, both here in the valley and up in the mountains.  That means our streams will fill rapidly each time there's rain – not quite the flash floods we saw in California's deserts, but fast enough you could observe it over the course of just a few minutes.  Our reservoirs are all chock-full and already overflowing prodigiously, so if these rains actually materialize I suspect we'll be in for some more flooding.

Next Tuesday a working steam locomotive will be stopping for a half hour in Cache Junction.  That's just a short distance south of my brother's cabin, about a half hour's drive from our home.  I'm hoping that Debbie and I can make it up there to see it!  Here's more about the No. 844 locomotive, and its 2017 schedule.

It's now 10 days since Debbie had the hardware removed from her knee, and she's recovering nicely.  There was a fairly big incision, and her healing process this time is all about that.  She can already put most of her weight on her left knee (the one that was operated on).  That incision was closed with staples, and they come out next Wednesday.  Once that happens, Debbie should be unleashed on the physical therapy process.  So far as we know now, she'll be doing that entirely on her own.  We're going to ask next week whether she should have a professional physical therapist work with her on it...

And speaking of Debbie...  She can't quite drive on her own yet, as she needs a bit of help getting in and out of the car.  But she has a hair appointment today, down in Ogden.  So I will be playing chauffeur for part of the day, to get her down there and back.  :)  We'll most likely eat out somewhere while we're down there – wouldn't want to miss the opportunity!
Posted by Unknown at (permalink) 8:01 AM No comments: