I heard a radio news report of this phenomenon, and did a little digging to see what the heck they were talking about.  The sources for this all suffer from a severe progressive/socialist bias, but on this issue I think they've struck something that ought to be a problem for people of any political persuasion.

Here's the basic idea that some genius politician came up with (I've no idea what the original source for this notion was).  Let's say you're a state politician in New Jersey.  A large company – say, General Electric – is planning to build a large plant that brings 2,000 direct jobs with it, and even more indirect jobs to support it and its employees.  You (the politician) want to persuade General Electric to locate that plant in New Jersey, but you don't want to give even the appearance of spending tax dollars to do it, because that will alienate the voters.  Here's the sly trick: you tell the company that you will give them a special deal – a tax credit equal to the income tax withheld for all its employees.


Much more on this here and here.

There are several things very wrong with this practice.  The one that offends me the most is the opaque expenditure of tax-payer dollars. By making it a tax credit instead of an appropriation, the politicians have carefully disguised this expenditure.  It is effective, too, for most tax payers – even those tax payers who actually pay attention to such things.  I had no idea this practice existed until yesterday, and apparently it has existed for over a decade.  There are other big problems as well: the government is picking winners and losers (always, always a problem), only large and well-connected companies will ever get this sweetheard deal, and it presents large and very obvious opportunities for Russian-style political corruption (which I have no doubt has already happened, and frequently).

The politicians promote this program as if it was a job creator, but of course it is no such thing.  The jobs involved will be created somewhere, just not in the state that doesn't offer such a deal.  The politicians also claim this program is free, but it obviously is not.  If New Jersey gives General Electric a $7 million check, either there's $7 million less to spend on other programs, or the state has to raise $7 million from other tax payers.  It is not free in any sense of that word.

Finally, there is an unintended consequence that is becoming a big problem in the earliest states to adopt this idea (and will be an increasing problem as the others “catch up”): companies who already are in the state are now threatening to leave these states unless they too get this special deal.  States are caving into this “job blackmail” for fear of the political consequences.  In these increasingly common cases, enormous tax credits are being granted to companies already located in a state – and all because they were originally offered to bring new companies in.

This is a corrupt practice with a veneer of legality poorly glued on.  It's also a great example of the kind of political rot that occurs in any government the longer it's been in existence.  Many political theorists have postulated that all systems of government have a natural lifespan that has never been exceeded, basically because the accumulation of this political rot eventually causes the government to become completely ineffective at its most important jobs.  When I learn about things like this happening in America, my thoughts immediately go to these theorists...because it looks like damned good evidence that they are correct.

Doom is not a particularly pleasant thought for a Friday morning...
Posted by Unknown at (permalink) 6:26 AM No comments:

The Obama You Don't Know...

Interesting article in the Washington Examiner that calls into question 10 elements of the Obama story.  It's good reading if you aren't an Obama fan.  I doubt it will shake any believer's foundation, though...
Posted by Unknown at (permalink) 5:56 AM No comments: 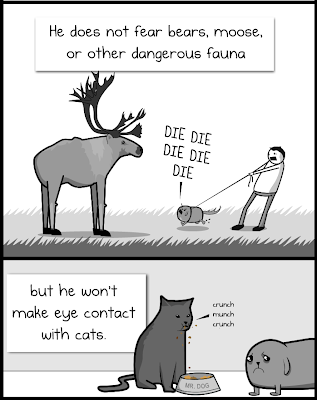 The Oatmeal has long been one of my favorite humor sites, but somehow I missed this particular strip.  James C. (a friend and colleague) passed this along to me yesterday.  At right is just two frames out of a much longer strip.  If you're a dog owner or dog lover, this is required viewing – but make sure you've swallowed your morning beverage and set down your cup before reading it.

Also for dog lovers, this awesome compendium of dog-related words and phrases.
Posted by Unknown at (permalink) 5:45 AM No comments: