Today's quote of the day is from Dave Carter, writing over at Ricochet.  He's one of the few writers (Mark Steyn is another) who can reliably make me laugh and cry at the same time:


Americans have beaten the odds too many times to see their liberty and families threatened by imbecilic little hoodlums with their pants falling off.

This is actually the conclusion to his post, which you really, really don't want to miss.  It's another one of those many things you want to remember when you vote in November...
Posted by Unknown at (permalink) 7:00 AM No comments:

These three Republican Senators issued a statement yesterday, commenting on Hillary Clinton's assumption of responsibility for the Benghazi debacle.  I think they got this exactly right (which, considering that they are all partisan politicians, is nothing short of miraculously refreshing):


We have just learned that Secretary of State Hillary Clinton has claimed full responsibility for any failure to secure our people and our Consulate in Benghazi prior to the attack of September 11, 2012. This is a laudable gesture, especially when the White House is trying to avoid any responsibility whatsoever.

However, we must remember that the events of September 11 were preceded by an escalating pattern of attacks this year in Benghazi, including a bomb that was thrown into our Consulate in April, another explosive device that was detonated outside of our Consulate in June, and an assassination attempt on the British Ambassador. If the President was truly not aware of this rising threat level in Benghazi, then we have lost confidence in his national security team, whose responsibility it is to keep the President informed. But if the President was aware of these earlier attacks in Benghazi prior to the events of September 11, 2012, then he bears full responsibility for any security failures that occurred. The security of Americans serving our nation everywhere in the world is ultimately the job of the Commander-in-Chief. The buck stops there.

Furthermore, there is the separate issue of the insistence by members of the Administration, including the President himself, that the attack in Benghazi was the result of a spontaneous demonstration triggered by a hateful video, long after it had become clear that the real cause was a terrorist attack. The President also bears responsibility for this portrayal of the attack, and we continue to believe that the American people deserve to know why the Administration acted as it did.

Posted by Unknown at (permalink) 6:47 AM No comments:

An easy-to-understand video that clearly explains why the auto bailout that Obama likes to brag about was a complete failure from any objective perspective:

Posted by Unknown at (permalink) 5:12 AM No comments: 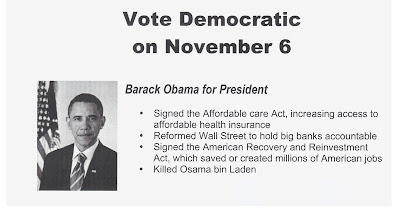 A Ricochet writer of the conservative persuasion was approached by an Obama worker going door-to-door looking to get out the pro-Obama vote.  There was an interesting interaction with the apparently resigned Obama worker, and the Ricochet writer got an Obama flyer (at right, click to enlarge).

The points on the flyer are the same old tired Obama campaign talking points.  The last one, though, is downright appalling: read literally, it claims that Obama personally killed Osama bin Laden.

Not “As Commander-In-Chief, directed our awesome warriors to carry the sword of justice to Osama bin Laden”.

I cringe, thinking about how that looks to the Special Forces operators who actually did kill Osama bin Laden.

I cringe, thinking about how that looks to any veteran of the U.S. Armed Forces.  Like me.

I cringe, thinking about how that looks to any American.  Like me.

Remember this when you vote in November...
Posted by Unknown at (permalink) 5:09 AM No comments:

Why Europeans Come to America for Healthcare...

The Progressives are much less fond of explaining why well-to-do individuals from the self-same countries choose to fly to America for their serious health problems.  Why would they do that?  And how can this behavior be reconciled with the statistics on longevity?

The answer lies in the way those longevity statistics are collected, and with cultural differences between the countries.  A very simplistic way to put it is this: if you take away deaths caused by cars and gunshots, then Americans live longer than anywhere else on Earth.  In particular, Americans who have long-term health issues (such as cancer or diabetes) have far better outcomes than non-Americans.  Those are the things our healthcare system deals with, and it deals with them better than any government-run system does.

Well, for now, anyway.  Obamacare is about to “fix” that, unless we manage to get it repealed.

There's a great post on this subject at CoyoteBlog, with much more detail...
Posted by Unknown at (permalink) 4:58 AM No comments:

The camera was actually mounted on his chest, not his helmet.  But who cares?