A day around the volcano (and some other things)...

A day around the volcano (and some other things)...  First thing this morning we headed into Volcanoes National Park, a couple miles up the road from where we're staying.  I wanted to drive to an overlook on the southeast side of Kilauea Crater where I thought we might see the eruption – but the Crater Rim Road is closed over half its length, including where that overlook is.  So we gave up on that effort, and headed down the Chain of Craters Road to see what we could see.  The first thing we did was to turn down the nine mile one-lane paved road that goes to the Hilina Pali overlook.  This is a road we've taken many times, for two main reasons: we frequently saw nene geese at a kipuka along the way, and there's a beautiful trail along the top of the pali.  We were disappointed on both these fronts.  The kipuka has been fenced off and there were no nenes in sight.  The trail was still beautiful, but we were in dense fog by the time we got down to the trailhead.

But the drive was still pretty, and we did see some flowers (photos below) and birds (especially some flocks of common amakihi).  The first two photos are a local primrose, two blossoms on the same plant.  They only stay yellow for one day, then fade to orange and drop off. 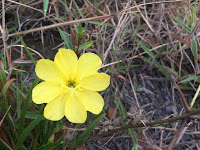 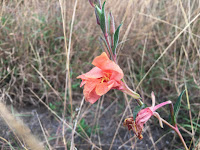 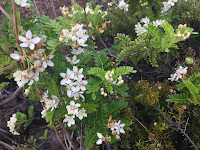 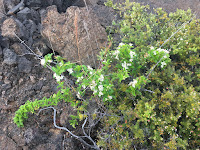 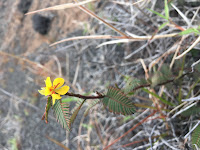 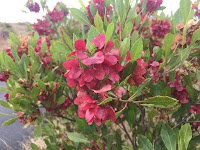 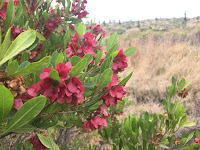 When we got to the overlook, I took a steep hike down a few hundred feet to the actual edge of the pali.  That was enough of an altitude difference to take me out of the clouds at the overlook, and I could see down to the bottom of the pali: 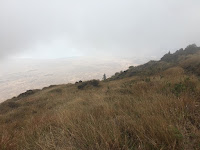 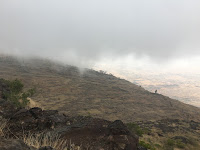 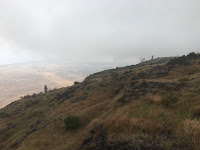 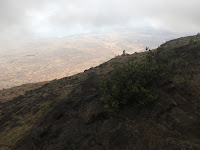 On the way back up to the overlook (where Debbie waited for me in our truck), I ran into something I didn't expect: a grove of baby koas. Neither of us can recall ever seeing koas in this area, and the best theory we can come up with for why they've suddenly appeared is that they were planted. The grove was quite localized, so that's at least plausible. 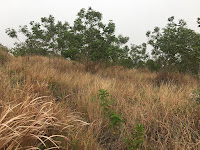 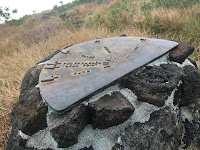 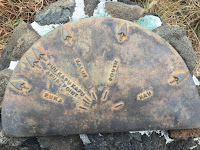 Along much of the length of the Hilina Pali Road, we saw lots of dead or dying ohias.  A little research led me to a map of the occurrence of Rapid Ohia Death (a fungus), and that area is in fact infected.  It's sad to see a ohia forest that's in the process of pioneering on recent lava flows be taken out by a damned fungus.  That map also shows that the easternmost areas of the Big Island are worst affected. 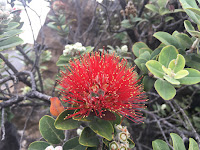 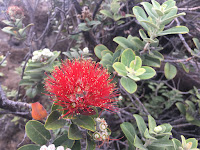 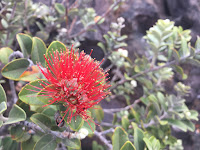 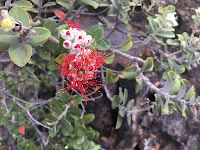 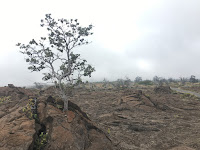 After we returned from Hilina Pali, we headed down toward the bottom of the Chain of Craters Road, to the place where lava flowed over the road about 25 years ago.  From that point, one can walk over recent lava flows to where lava from Pu'u O'o is currently spewing into the ocean.  The distance varies depending on the random route the lava happens to be flowing on any given day, so I didn't know how long it would be without going down to look.  That long a hike over rough lava is too much for Debbie at the moment, and I wasn't going to leave her the truck while I did the hike by myself, so we just turned around and headed back.  We stopped along the way, though, so that I could make the short hike out to the top of the bluff at the ocean's edge.  These bluffs, where I stood, were about 50' above the water.  It was spectacular scenery, especially if you ignore my thumb in that one photo. 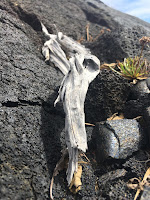 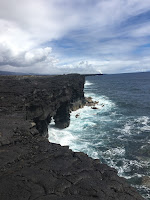 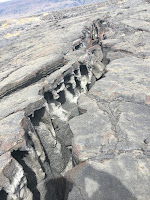 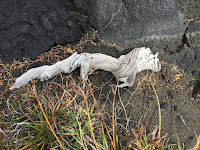 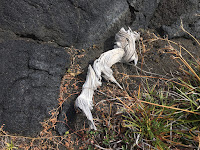 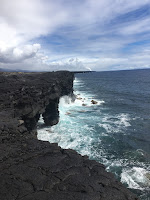 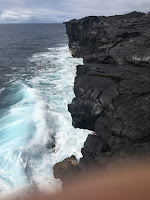 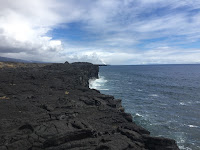 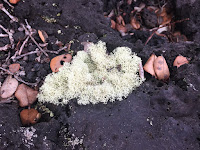 After we returned from the Chain of Craters Road, we headed clockwise around to the Jaggar Museum and overlook, which was the best place to see the eruption in Halemaumau Crater (a crater inside of the larger Kilauea Crater). This eruption varies tremendously over time scales of just a few hours; anything from a calm lava lake (which is how we found it today) to violently erupting vertical fountains of lava (which we'd very much love to see!).  No lava spectacles for us today, dang it.

We did see quite a bit of evidence of the nanny state in action, though, and that really grates on me.  From signs prohibiting drones (why on earth would they do that?) to dangerous areas being closed off, the government nanny was working harder than ever.  The hike Jim B. and I once made to the summit of Pu'u O'o would actually be illegal now; we could be charged and prosecuted.  I don't know if they are actually doing so, but they laws and regulations are in place to let them do so. 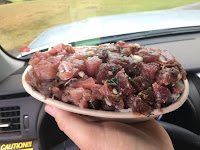 After all that, we decided it was time to have our one big meal for the day.  After some discussion about the need for us to try new restaurants, Debbie decided that what she really wanted was some more Suisan poke! :)  So we headed back down to Hilo and grabbed us some (my “double choice poke bowl” is at right).  That's Suisan's “Hawai’i style” aku on the left, and ahi on the right.  There's a thick layer of poke on top of a bed of white rice seasoned with a seaweed mix.  So good, it was! 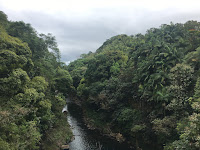 We finished off our daylight by cruising some of the back roads of the Hamakua Coast.  It's a beautiful area today (like the gulch at right), but within our own memories it was an even more beautiful place – during the heyday of the great sugar plantations that used to be here.  They are now completely gone, which is astounding to us, as that's a rather enormous change over relatively few years.  There used to be hundreds of thousands of acres of gorgeous sugar cane fields with ocean vistas.  That's entirely gone now.  You have to search pretty hard to find even a single sugar cane plant remaining from the many millions that once grew here.  Now there's a much more mixed flora, and one that's much taller in general – so the grand views we used to get from roads a couple thousand feet high are now almost completely gone.

Tomorrow we head down to the south part of the island, near the town of Na'alehu.  We have many fond memories of this area, and we know from our reading that it has greatly changed.  We have a little trepidation about what we'll run into.  On the other hand, a major expansion of the Volcanoes National Park happened since our last visit, with large tracts acquired just upslope from Na'alehu; we're looking forward to seeing that.  It's good habitat for some of the native birds up there, so with any luck we'll have some good birding.
Posted by Unknown at (permalink) 10:03 PM No comments: