Paradise ponders, cont'd... Abby and I have finished her lesson for this week, and Debbie and I have been on a little shopping expedition (getting supplies for our road trip tomorrow). Here's the promised updates! 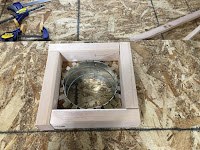 Yesterday's work out in the shed resulted in the interior “box” at right, on the bottom side of the top piece of the top side of the plenum I'm building (got that?).  Unseen in the photo are all the other pieces of 2x3 and OSB that I've cut to build the rest of the top.  A little bit of nailing and that will be finished.  Then all that remains for the plenum are the rails to hold the filter (also already cut) and the front cover.  After that's all finished I'll be wiring up the blower and testing it.

This morning was completely overcast, which makes for nice diffuse lighting for flower photography and saturated low-contrast landscapes, both interesting photographic effects.  So I wandered around our yard for a bit taking photos of springtime.  This was right after I filled all our bird feeders, and spotted a male Bullock's Oriole feeding at the feeder containing nuts and dried fruit.  Some samples: 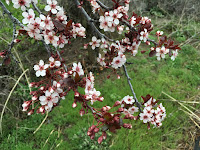 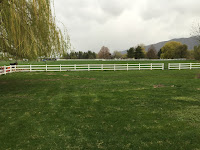 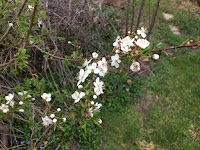 Debbie and I are going to watch a movie (on Blu-Ray) this afternoon: Iron Man 3.  This will shock some people who know me :)  Even more shocking – we've already watched (and enjoyed) Iron Man and Iron Man 2.  These movies have no memorable characters, little real drama, implausible plots and technology, a bit of slapstick humor, tons of action, some pretty girls, and lots and lots of shoot-'em-up action that somehow all blends together into a somewhat mindless but very entertaining package.  Somehow that's just what we've needed the past few days...
Posted by Unknown at (permalink) 12:39 PM No comments:

Paradise ponders...  Well, yesterday was an awful day for us – but all the calls, emails, comments here, Facebook posts, etc. about Mo'i that we got from our family and friends really did help.  We don't have the words to tell you how much they were appreciated.  Our vet from Jamul remembered how Mo'i was won over by her dog biscuit jars.  My mom remembered my dad talking about Mo'i as a fellow food-loving friend.  Our vet here remembered how even-tempered and unflappable Mo'i was.  Everybody remembered him as a sweet example of man's best friend.  We remember all of those things and more.

Tomorrow we're headed out on a day trip that should be almost the exact opposite of yesterday's experience with Mo'i – we're driving to Wells, Nevada (yes, on purpose!) to spend a couple of hours with a five week old litter of field spaniel puppies – one or two of which are destined to join our home in about four weeks.  This is a litter raised by the same breeder (Sheila Miller) who raised and selected Lea, Mo'i, and Miki for us.  She's going to try to pick the most likely agility star out of the litter, which is what she did with Miki and she hit a home run on that one.  Sitting amongst those little puppies will be good medicine, I think...

Yesterday morning, before we went to the vet's with Mo'i, I did some work out in the shed on the heating system, and I actually got quite a bit done.  I'll be posting about that later (I'm in a bit of a hurry right now, as my student, Abby S., is due here shortly).  After we got back from the vet's, Debbie and I both needed to do something to get through our grief for Mo'i.

I went out and mowed the yard for the first time this season, and that turned out to have the perfect amount of thinking required: just enough to keep my mind on the task, not so much that my emotional state rendered me incapable of doing it.  After three hours of mowing I was slightly more functional.

Debbie took a different tack: she went around the house and removed all the things particular to Mo'i.  That was a surprising amount of stuff.  Mo'i had a set of paraphernalia related to diapers, for instance: diaper holders, the diapers themselves, and a special box to hold all that stuff.  Then there were his medicines, five of them, occupying a corner of our kitchen.  He had his own special food to treat his kidney condition.  We had an ever-present spray bottle of Pine-Sol mix and a loose roll of paper towels, standing by to clean up Mo'i messes.  Then there were a couple of extra dog beds, the kind with very soft mattresses, to give him some comfort this past year.  All of these things were very visible reminders of Mo'i, and Debbie took care of them all.  The medicines and food are going to the vet, our donation to help other families whose pets need these things, but which they can't afford.  Two of the dog beds got re-purposed into “upstairs” beds for Miki and Race (which they used while we watched a movie last night).  Everything else was tossed or put away.  Debbie felt a little better after doing all that.

While filling the bird feeders yesterday, I noticed that we had some yellow tulips popping up, along with more daffodils.  I cut a few stems of them, and Debbie put them in some old pretty bottles she'd saved, making each bottle into a single-stem vase.  They add a bit of cheer to our kitchen right now.

More later.  Now I need to go prepare for the arrival of Abby S.!
Posted by Unknown at (permalink) 6:48 AM No comments: