My wife forwarded this short story to me, with the subject line “Romance novel material”:


He grasped me firmly, but gently, just above my elbow and guided me into a room, his room. Then he quietly shut the door and we were alone. He approached me soundlessly, from behind, and spoke in a low, reassuring voice, close to my ear.

"Just relax..." Without warning, he reached down and I felt his strong, calloused hands start at my ankles, gently probing and moving upward along my calves, slowly, but steadily. My breath caught in my throat. I knew I should be afraid, but somehow I didn't care. His touch was so experienced, so sure. When his hands moved up onto my thighs, I gave a slight shudder, and I partly closed my eyes. My pulse was pounding. I felt his knowing fingers caress my abdomen, my ribcage. And then, as he cupped my firm, full breasts in his hands, I inhaled sharply. Probing, searching, knowing what he wanted, he brought his hands to my shoulders, slid them down my tingling spine and into my panties. Although I knew nothing about this man, I felt oddly trusting and expectant. This is a man, I thought. A man used to taking charge. A man not used to taking "no" for an answer. A man who would tell me what he wanted. A man who would look into my soul and say...

"Okay, ma'am," said a voice. "All done." My eyes snapped open and he was standing in front of me, smiling, holding out my purse. "You can board your flight now."

What is she trying to tell me?
Posted by Unknown at (permalink) 4:38 AM No comments:

Caring for Your Introvert...

This resonates strongly.  Nobody who knows me well will be surprised.
Posted by Unknown at (permalink) 4:35 AM No comments: 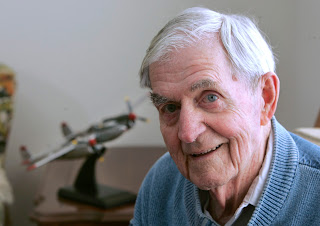 I first read about Fred Hargesheimer about 15 years ago.  Fred was a P-38 pilot in WWII, shot down over Papua New Guinea, hidden and nurtured by natives.  He survived the war and went on to become a successful businessman (with ERA and Univac).  Later he went back to the natives of the Nakanai tribe, and offered to help.  He started with a school, but did much, much more for the tribe, trying to repay them for saving his life (at great risk to themselves).  Eventually he was given a great honor by the tribe, and just a few years ago the wreckage of his plane was found (after all these years!).  Fred was, of course, an old man by then – but the tribe knew he'd really want to see the wreckage.  So they cleared a helicopter pad in the jungle nearby the wreck, and arranged for him to be helicoptered in, and then carried through the jungle to the wreck.  Fred was able to positively identify the plane.  Here's a more detailed version of his story.

There's much more to Fred's story, of course.  I recommend his book The School That Fell From the Sky; read it and you'll see why I call Fred one of my heroes.

Fred Hargesheimer died on December 23.
Posted by Unknown at (permalink) 4:34 AM No comments: