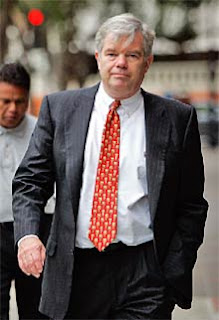 About seven years ago, in a different life, I sat down with this man to negotiate the sale of a technology and product line that my company had developed. He is Stephen Gardner, and at that time he was the CEO of Peregrine Systems, here in San Diego. Today this news:

Former Peregrine Systems Chief Executive Stephen Gardner was sentenced Thursday to eight years and one month in prison for his role in the massive fraud that sent the once-high-flying software company spiraling into bankruptcy.

Prosecutors charged that Gardner and 17 other Peregrine executives systematically overstated revenue by millions of dollars from 1999 to 2001 ensuring that the company's stock would climb in value.

Shareholder losses following the collapse of the scam are estimated at $3 billion.

“I did hide problems in the hope that they would be fixed and we could move on,” Gardner told U.S. District Judge Thomas Whelan in San Diego before being sentenced. “I was dedicated to making Peregrine a great company and I failed.”

The former head of one of San Diego's most prominent tech companies pleaded guilty in March 2007 to one count each of securities fraud, obstruction of justice and conspiracy to commit securities and wire fraud.

He had originally been indicted on 46 counts.

Under the terms of his plea, Gardner had faced a sentence of up to 20 years. He also agreed to cooperate with investigators and testify against the remaining defendants.

In that testimony, the disgraced former CEO laid out how he had presided over an accounting scheme that lasted for years. He described how the sham business deals had mounted, quarter after quarter, until Peregrine became a runaway train of corporate corruption.

He and I never reached agreement on a deal, mainly because he insisted on paying us in Peregrine stock (instead of cash), and we were quite skeptical of the value of that stock. Not long afterward, Peregrine cratered – and we were very glad we didn't reach an agreement.

Still, it's an odd feeling to know that someone I once tried to do business with was actually committing fraud, knowingly, at the very time I was working with him...

Posted by Unknown at (permalink) 3:04 AM No comments:

At least for now.

Posted by Unknown at (permalink) 2:19 AM No comments: