Dang it, another fire.  CAL FIRE is calling this one the “Cowboy” fire; at last report it was around 200 acres, out between Potrero and Campo in a remote area (map of approximate location, NOT its size).  No people or structures are threatened, and it doesn't appear to be any danger to us as it's quite far away (about 16 miles).  As I was driving home tonight, Debbie called me saying that she could see smoke out toward Barrett Lake (east of our house).  So I drove out that way before I came home, which is where I snapped these two photos at around 3 pm, from Lyons Valley Road just west of Lake Barrett. 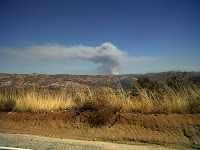 There are lots of news reports, as usual with these things they full of conflicting information.  What I could see for myself, though, was very comforting: a small cloud of fire-fighting aircraft swarmed around the fire.  As I drove home, a gigantic helicopter, painted bright red and black, flew right over Lawson Valley headed for the fire site.  It looked like some kind of bizarre insect, angry and rarin' for a fight.

There is every reason for folks out our way to feel safe – the winds that would make a fire dangerous are not present, nor are they forecast.  Let's hope nothing too odd happens with our weather – and let's all keep our fingers crossed that the firefighters and the folks of East County out near the communities of Potrero, Campo, and Lake Morena – and their property – all stay safe...
Posted by Unknown at (permalink) 5:26 PM No comments:

Courtesy of Google...
Posted by Unknown at (permalink) 4:31 AM No comments: