Ghost of Political Correctness Yet to Come... 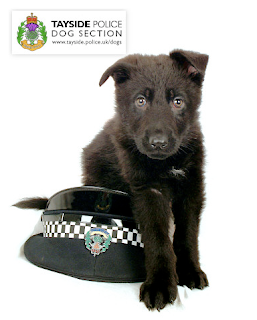 There's one way in which the U.K. is a few years ahead of the U.S.: in their journey down the path of political correctness. The photo at right is what provoked the latest example. Read about it...and weep:

The German shepherd puppy has proved hugely popular with the public, hundreds of who have logged on to the force's website to read his online training diary.

But some Muslims in the Dundee area have reportedly been upset by the image because they consider dogs to be "ritually unclean", while shopkeepers have refused to display the advert.

Tayside Police have admitted they should have consulted their 'diversity' officers before issuing the cards, but critics argued their apology was unnecessary.

I can't believe that Muslims are actually so offended by a photo of a puppy. Surely, if that were so, we'd have heard about it long before this. I think a much more likely explanation is that some mullah, totally bemused by his enemy's propensity for cultural suicide, decided to see just how far he could push the boundaries of political correctness. Right about now, he's probably in pain from laughing so hard...

Don't laugh too hard, though, folks – this path is exactly where Obama and the Democrats want us to go...

Here's a link to the web site of the police force mentioned above.