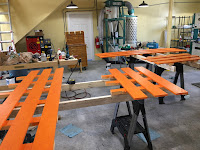 Paradise ponders...  This morning I got a topcoat onto one side of the trailer sides.  That took two hours altogether!  If I keep this up, I might actually finish those sides one of these days :)

While waiting for that coat to dry, I came back inside and started working on the accumulated bills and receipts.  After a couple hours of that, I could stand no more, and decided to take a break.

So I finished putting my new spotting scope (a Swarovski ATX95) together, and took it outside to see how well it worked (or didn't).  The first poking around by eyeball got me pretty excited – the field of view feels wide and flat, and is crystal-clear from edge to edge.  At the lowest power (30x) I couldn't detect any aberration at all.  At the highest power (70x) I could see a bit of radial brightness variation, but no color aberrations.  The tripod is smooth and easy to use, and I really like the fact that the zoom and focus are on adjacent rings, right near the tripod mount where they jiggle the scope less.  Very nice all around.

Then I tried putting the camera on.  All I did was slip on a disk with a hole in it (supplied by the scope's maker).  This adapter is intended to be coupled with a holder for a mobile phone, but there are no holders available for the iPhone 6S+ that I have, so instead I simply held the iPhone in place.  The three photos below are my first three attempts through the scope.  The first two are at 30x, the last a repeat of the second, but at 70x: 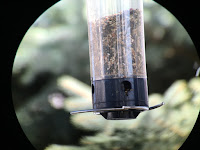 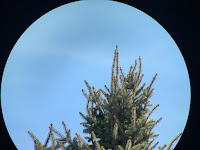 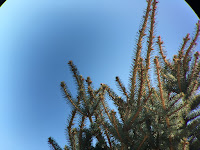 For that first photo I was 22 feet from the feeder. For the last two, I was 160' from the base of the tree.  I think I'm gonna like this thing :)  Now I just need a bird to stand still long enough for me to get a photo of it!
Posted by Unknown at (permalink) 1:36 PM No comments:

Word of the day...  Via my brother Scott:


deja poo: a political term describing the feeling that you've heard that shit before. Extraordinary portraits...  Photographs of homeless people...
Posted by Unknown at (permalink) 6:58 AM No comments:

Paradise postcards...  I looked out our office window a minute ago, and said to Debbie: “We live in a postcard!”  Why?  Because I was looking at the isolated peaks to our north, snow-covered, and lit up by the rising sun while we were still in twilight.  It's the sort of scene you'd find on a postcard, and we get to see it every day...

Yesterday morning we were worried about Mo'i (our oldest field spaniel).  After weeks of him obviously feeling better, and urinating much less, he was once again getting lethargic and urinating at a rate you wouldn't believe unless you actually witnessed it.  The weeks of feeling better were while we had him on Clavamox (an antibiotic often prescribed for urinary tract infections in dogs).  He had finished a three week course of it about 10 days ago – but here he was, looking like the UTI had recurred.

So we called our (wonderful!) vet's office and told them the situation.  They asked us to bring a urine sample in.  A few minutes later, I was outside trying to hold a small bottle in the right place under Mo'i – and he was looking at me with such a questioning look on his face.  Why are you doing this?  You never did this before!  Let me pee in peace!

Even though I only caught maybe 10% of the urine in the bottle (and 20% on my hands), I managed to get more than enough for their testing.  We ran it up to the vet's office and then went into town to do a few errands.  On the way home we called them to see if they had any news – and learned that our vet had (personally) run the urine sample up to the veterinary school at USU for some special testing.  In the afternoon she called us with the results: Mo'i's urine is highly alkaline (unusual), has lots of uric acid crystals (bad), and he had a UTI again (which is what we suspected).  Poor old man!  The vet prescribed one more round of Clavamox, but asked permission to culture the infection in Mo'i's urine, to find out if we had some bacteria there that Clavamox wasn't knocking completely out.  That may result in us switching to another antibiotic, but we won't know for up to a week.  She also prescribed some special food (low in urea, a precursor chemical to those uric acid crystals) and passed along a recommendation from the folks at USU to add methionine to his food (this helps reduce the alkalinity of his urine).  We had to go to a health food store to get that; it's not something a vet or pharmacy normally carries.

Just a few hours after giving Mo'i his first dose of Clavamox, he was feeling noticeably better.  That's such a fast response that I thought I must be imagining it – and then I saw him run to his food bowl.  Mo'i hasn't actually flat-out run in years.  Then he was jumping around with food anticipation just like the two youngsters.  Finally, last night he produced only a tiny fraction of the urine he had just the day before (we judge this by the diaper weight in the morning).  That's an amazingly fast reaction to an antibiotic!  He may end up being on antibiotics for the rest of his life.

Yesterday afternoon we went on a drive up Hardware Ranch and toward Ant Flats.  We saw all sorts of wildlife: bald eagles, ferruginous hawks, northern harriers, belted kingfishers, Sandhill cranes, American dippers, bazillions of deer and elk, and more.  We took a slightly different route than usual (going up the “back way” to the Hardware Ranch visitor's center) and were able to drive up to within about 200' of a herd of 50 or so elk with a bunch of deer mixed in.  That herd had a magnificent bull elk, who stood on the hill just above us and stared us down.  Beautiful!
Posted by Unknown at (permalink) 6:57 AM No comments: