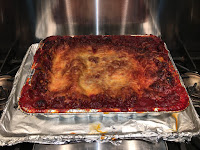 Lasagna in Paradise!  Debbie cooked up a huge batch (three full-sized pans like the one at right).  Most of this is going in the freezer, but one corner of one pan was our dinner tonight.  It was brains-fall-out-on-the-table great!

The quantity of food that went into this is staggering: six pounds of hamburger, four pounds of sausage, nine big cans of tomato sauce, six cans of tomato paste, a half-dozen boiled-down tomatoes from our neighbor's garden (the last of the season, dang it!), three big boxes of lasagna noodles, nearly a gallon of ricotta cheese, several pounds of mozzarella cheese, a pound of Parmesan cheese, and all sorts of spices.

Now I'm in a pasta coma :)  And I will be again, quite a few times over the winter!

Posted by Unknown at (permalink) 3:26 PM No comments:

Jonah Goldberg has long been...

Jonah Goldberg has long been ... one of my favorite political commentators.  The fact that he's a fellow dog lover doesn't hurt my opinion of him at all :)  Here's one paragraph from his column this week, describing what happens when Zoë (one of his two dogs) runs in to steal a squirrel trapped by Pippa (his other dog):


Now I should say, I’m a big softy when it comes to these things. I hate to watch Zoë kill anything, but I nonetheless admire the commitment and passion. She raced-in, her paws barely touching the earth. She barreled Pippa out of the way; the little spaniel bouncing off the dingo like Robert Reich in a windstorm. Zoë grabbed the “beast,” hurling it into the air and catching it again in her mouth with a skill usually associated with frat guys’ tossing chicken McNuggets into each others’ mouths. When I yelled at her to drop it, I might as well have been commanding the statue at the Lincoln Memorial to dance. My commands were drowned out by the Viking battle drums beating in her ears. My futile attempts to grab her collar only encouraged her to run away and chomp more ferociously. I wasn’t trying to save the squirrel’s life. That would be like trying to revive the Thanksgiving turkey by chanting over the leftover-sandwiches. But I didn’t like the prospect of the bowel stewing that might accompany a breakfast of raw squirrel, healthy or sick. Finally, her war dance concluded, and the awareness came that she could not bring home her trophy, never mind enlist my wife in her cause of making a necklace of squirrel skulls. She ran off and buried it. Somehow I don’t think it was respect for the dead that motivated her.

The column, as always, is well worth your time to read...
Posted by Unknown at (permalink) 5:36 AM No comments:

Civil asset forfeiture abuse...  This program is one of those things that makes me ashamed of my country.  It quite literally gives judges and law enforcement a license to steal from innocent citizens.  If you find that hard to believe, then you need to do some reading (and follow my link here to find a source).  This year the program has reached a new milestone: the cops are stealing more from citizens than the crooks are.  A lot more.

The bits are flying in Paradise!

The bits are flying in Paradise!  At about 4:30 this morning, I braved the cold (22°F) and walked out to the shed with my arms full of networking gear.  Except for the Ethernet isolator, this was all stuff I bought and configured last January, and then just stored until I got the cabling all done.  This morning I plugged it all in with the router, switch, and wireless router all sitting on top of my jointer, and ... it all worked, immediately.  My initial test was to connect my phone to the shed's (new) wireless network, and that worked perfectly.  Then I came back in the house and logged into each piece of equipment's administration page and checked it out.  All working correctly!

The only anomaly I noticed was that the Ethernet link between the house router and the shed router took an unusually long time to come up – around 45 seconds.  Usually an Ethernet link will establish in under 10 seconds.  I think what's going on there is that the Ethernet isolator is powering up.  It draws what little power it needs from the data lines, and I'm guessing that it takes a little while to charge its storage capacitors (you could think of them as tiny rechargeable batteries).

Given that this is a residence, we have quite the network installed here.  In the house, there's a cable router which feeds the main house router, which in turn feeds a 20 port switch, the shed's router, and two wireless routers.  In the shed there's the main shed router, which feeds another 20 port switch and a wireless router.  When I finish moving my office from the house to the shed, we'll have a fairly even split of networked gear between the two buildings, most likely using 8 to 10 of those switch ports in each place.  That leaves us plenty of room for expansion!

Comcast may have notoriously bad service, and they clearly do inject content into insecure web pages (HTTP vs. HTTPS), but ... they are delivering some nice, fast Internet to us: 180 mbps down, 24 mbps up, quite consistently.  That's way faster than we used to have in Jamul, so for us this is a huge step up.  Partly this is just plain luck: we live on the highway that the main Comcast feed for the southern part of Cache Valley runs alongside.  The cabin we've purchased for my brother isn't quite so lucky – Comcast doesn't even service that area.  Instead we're connecting him through a wireless ISP (Rise), at 50 mbps down and 5 mbps up.  Even that is way better than what he's used to, so I'm expecting a big smile from him when he connects for the first time...
Posted by Unknown at (permalink) 5:14 AM No comments:

Syria conflict for dummies!  Passed along by reader Simi L., who is responsible for a great many belly laughs from this writer:


President Assad (who is bad) is a nasty guy who got so nasty his people rebelled and the Rebels (who are good) started winning.

But then some of the rebels turned a bit nasty and are now called Islamic State (who are definitely bad) and some continued to support democracy (who are still good).

Getting back to Syria. President Putin (bad, as he invaded Crimea and the Ukraine and killed lots of folks including that nice Russian man in London with polonium) has decided to back Assad (who is still bad) by attacking IS (who are also bad) which is sort of a good thing?

Now Iran (who used to be bad, but now they have agreed not to build any nuclear weapons and bomb Israel are now good) are going to provide ground troops to support Assad (still bad) as are the Russians (bad) who now have ground troops and aircraft in Syria.

So, a Coalition of Assad (still bad) Putin (extra bad) and the Iranians (good, but in a bad sort of way) are going to attack IS (who are bad) which is a good thing, but also the Syrian Rebels (who are good) which is bad.

Now the British (obviously good, except Corbyn who is probably bad) and the Americans (also good) cannot attack Assad (still bad) for fear of upsetting Putin (bad) and Iran (good / bad) and now they have to accept that Assad might not be that bad after all compared to IS (who are super bad).

So Assad (bad) is now probably good, being better than IS (no real choice there) and since Putin and Iran are also fighting IS that may now make them good. America (still good) will find it hard to arm a group of rebels being attacked by the Russians for fear of upsetting Mr Putin (now good) and that mad ayatollah in Iran (also good) and so they may be forced to say that the Rebels are now bad, or at the very least abandon them to their fate. This will lead most of them to flee to Turkey and on to Europe or join IS (still the only constantly bad group).

To Sunni Muslims, an attack by Shia Muslims (Assad and Iran) backed by Russians will be seen as something of a Holy War, and the ranks of IS will now be seen by the Sunnis as the only Jihadis fighting in the Holy War and hence many Muslims will now see IS as good (doh!).

Sunni Muslims will also see the lack of action by Britain and America in support of their Sunni rebel brothers as something of a betrayal (might have a point) and hence we will be seen as bad.

So now we have America (now bad) and Britain (also bad) providing limited support to Sunni Rebels (bad) many of whom are looking to IS (good / bad) for support against Assad (now good) who, along with Iran (also good) and Putin (also, now, unbelievably, good ) are attempting to retake the country Assad used to run before all this started?

This should clear it all up for you. Just so you know I am not taking any questions on this subject!!!!!!!!!

Posted by Unknown at (permalink) 3:38 AM No comments: 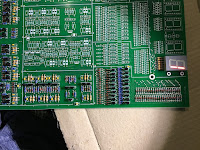 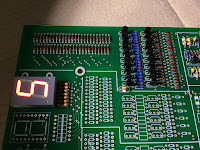 Paradise ponders...  I worked some more this morning on my KABtronics clock kit – got the seconds decoder, LED drivers, and LED done.  When I finished, I powered it up – and got nothing on the LED at all.  A little inspection and I found a row of 7 resistors that I'd forgotten to install, and these were the current-limiting resistors for the LED segments.  Once I actually loaded all the parts, it all worked on the first try.  The circuit board now weighs perceptibly more than it did when I started, just from the weight of the 200 or so components I've mounted (and soldered).  I'm in awe of the job the kit's maker did on it.

Yesterday afternoon, UPS delivered my Black Box SP426A Ethernet isolators.  They were the last component I needed before installing a router, switch, and wireless router out in the shed – so that's what I'm going to be doing this morning.  With any luck at all, I'll soon have network communications (including Internet access) out there!
Posted by Unknown at (permalink) 2:55 AM No comments: