My cousin Mike D. sends along this parable:


A mouse looked through the crack in the wall to see the farmer and his wife open a package.  "What food might this contain?" the mouse wondered - but he was devastated to discover it was a mousetrap.

The chicken clucked and scratched, raised her head and said, "Mr. Mouse, I can tell this is a grave concern to you, but it is of no consequence to me. I cannot be bothered by it."

So, the mouse returned to the house, head down and dejected, to face the farmer's mousetrap alone. That very night a sound was heard throughout the house -- like the sound of a mousetrap catching its prey. The farmer's wife rushed to see what was caught. In the darkness, she did not see it was a venomous snake whose tail the trap had caught. The snake bit the farmer's wife. The farmer rushed her to the hospital, and she returned home with a fever.

Everyone knows you treat a fever with fresh chicken soup, so the farmer took his hatchet to the farmyard for the soup's main ingredient. But his wife's sickness continued, so friends and neighbors came to sit with her around the clock. To feed them, the farmer butchered the pig.

The farmer's wife did not get well; she died. So many people came for her funeral, the farmer had the cow slaughtered to provide enough meat for all of them.

The mouse looked upon it all from his crack in the wall with great sadness. So, the next time you hear someone is facing a problem and think it doesn't concern you, remember -- when one of us is threatened, we are all at risk. We are all involved in this journey called life. We must keep an eye out for one another and make an extra effort to encourage one another.

Posted by Unknown at (permalink) 1:43 PM No comments:

Send In the Old Farts!

Via my lovely wife, who says she agrees with this 100%:


New Direction for any war: Send Service Vets over 60!

I am over 60 and the Armed Forces thinks I'm too old to track down terrorists. You can't be older than 42 to join the military. They've got the whole thing ass-backwards. Instead of sending 18-year olds off to fight, they ought to take us old guys. You shouldn't be able to join a military unit until you're at least 35.

For starters, researchers say 18-year-olds think about sex every 10 seconds. Old guys only think about sex a couple of times a day, leaving us more than 28,000 additional seconds per day to concentrate on the enemy.

Young guys haven't lived long enough to be cranky, and a cranky soldier is a dangerous soldier. 'My back hurts! I can't sleep, I'm tired and hungry.' We are impatient and maybe letting us kill some asshole that desperately deserves it will make us feel better and shut us up for awhile..

An 18-year-old doesn't even like to get up before 10am. Old guys always get up early to pee, so what the hell. Besides, like I said, I'm tired and can't sleep and since I'm already up, I may as well be up killing some fanatical son-of-a-bitch.

If captured we couldn't spill the beans because we'd forget where we put them. In fact, name, rank, and serial number would be a real brainteaser.

Boot camp would be easier for old guys.. We're used to getting screamed and yelled at and we're used to soft food. We've also developed an appreciation for guns. We've been using them for years as an excuse to get out of the house, away from the screaming and yelling.

They could lighten up on the obstacle course however... I've been in combat and never saw a single 20-foot wall with rope hanging over the side, nor did I ever do any pushups after completing basic training.

Actually, the running part is kind of a waste of energy, too... I've never seen anyone outrun a bullet.

An 18-year-old has the whole world ahead of him. He's still learning to shave, to start a conversation with a pretty girl. He still hasn't figured out that a baseball cap has a brim to shade his eyes, not the back of his head.

These are all great reasons to keep our kids at home to learn a little more about life before sending them off into harm's way.

Let us old guys track down those dirty rotten coward terrorists. The last thing an enemy would want to see is a couple million pissed off old farts with attitudes and automatic weapons, who know that their best years are already behind them.

HEY!! How about recruiting Women over 50...in menopause!!! You think MEN have attitudes??  Oh my God!!! Put them on border patrol. They'll have it secured the first night!

The project is moving right along.  Chris (the contractor) and his two boys were here yesterday (Saturday) to work on getting the roof in a waterproof condition.  He's worried that we'll have some rain before he gets it “buttoned up”, but that seems pretty unlikely this time of year.  At far right, in a carefully positioned shot, you can see what the red roof will look like when it's all done.  The photo immediately to the right shows what the roof really looks like right now – covered with the high-tech underlayment that's making the roof waterproof now, and that provides a good base for the metal roof to lie on.

The metal roofing parts are being made right now, at the roofing manufacturer.  They're going to take between two and four weeks longer to be finished, so once the fascia, underlayment, and soffits are all installed there will be a hiatus in the project until the materials are fabricated.

This short video gives you a tour of our roof in its current condition.  Pardon the low quality; it was shot with a Blackberry!

Posted by Unknown at (permalink) 12:35 PM No comments: 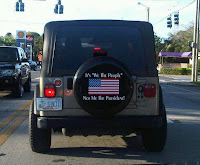 (click to enlarge)
Posted by Unknown at (permalink) 12:21 PM No comments:

The open-borders crowd has some thinking to do.  Mexican nationals – members of the much-feared “Los Zetas” drug cartel – have captured at least two American ranches in Texas.  The ranchers are ok; apparently they escaped.

Personally, I think our response should be carefully nuanced, using all the appropriate tools at our disposal.  That would include Hellfire missiles, bunker-buster bombs, C-130 gunships, artillery, tanks, guns, U.S. Marines, and anything else we've got that will kill invading scum.  We need to send a clear message: if you take or harm our citizens or their property, then you die.  Quickly.  Without hanky-twisting, prior notification, or preliminary negotiation.

Something tells me that this administration's response will somewhat less effective than a Marine detachment...

Update: I tried to get a bit more information on this report, and ran into some articles calling it a hoax.  So...take this with a grain of salt until (and if) I can confirm it...
Posted by Unknown at (permalink) 8:52 AM No comments:

The frames at right were captured on a 10,000 fps video camera with a macro lens aimed at a sphagnum moss just as it shot out its spores.  The donut-shaped vortex allows the sphagnum to shoot its spores much further than would otherwise be possible for it...
Posted by Unknown at (permalink) 8:35 AM No comments:

It's a new programming language from Google.  I just ran across it for the first time, and I haven't had a chance to look at it carefully.  From the docs and FAQs at their site, they've made some interesting design choices, especially in moving away from the formality of strongly-typed languages like Java and C++.  I'd love to spend a few days just playing with it, but I don't have the time just now...
Posted by Unknown at (permalink) 7:57 AM No comments:

The World is a Funny Place Department...

Generally, most of the visitors to my little blog get here in one of two ways: either they are crazy enough to have bookmarked my blog, or they've searched for something that appears on my blog.

For the last few days, though, a third category of visitors has dominated: those who clicked on a link in an email to this post.  Apparently it caught someone's fancy, they forwarded it in an email, and those people forwarded it, and it went on and on.

Leaving me to wonder...why this particular post?  I have no idea...
Posted by Unknown at (permalink) 7:16 AM No comments: