Paradise ponders, petrified lava lamp edition...  I missed two days of blogging – something I haven't done for a long, long time – and it's all because of snow.  On Tuesday night we got about eight inches of fresh powdery snow, and on Wednesday morning I was out in the 5°F early morning plowing, blowing, and shoveling that stuff out of the way.  I had to drive Debbie down to Ogden for an appointment, and we had to leave at 10:30 am – so I had to work fast.  I got done just in time, cold and tired, and we left for Ogden.

The drive through Sardine Canyon from Wellsville to Brigham City was a real learning experience for me.  We were in our Model X, and this was the first time I'd had it out in dodgy road conditions.  As we turned onto Highway 89 after taking the 101 from Hyrum, we were in a full four-wheel drift across the turn lane.  We didn't stop drifting until we hit the ruts in the slush formed by other cars traveling on the highway.  That was almost enough to make me turn around right there! :)  Higher up in the pass, we hit icy roads and slowed down to 25 mph.  Most cars slowed with us, but there were still quite a few crazy people going much faster – including some with heavily-loaded trailers.  One guy with 8 Angus steer in a fifth-wheel trailer passed us going about 60.  If the slightest unexpected thing happened, there would have been a lot of hamburger along the road.  Heading down toward Brigham City, I realized the Model X's weight (5,500 pounds) was an issue: it's hard to stop that much weight once it starts sliding.  I was very careful on any icy downhill area, and I never had any trouble – though I did see the idiot light flashing fairly often to let me know that the wheels were slipping.  The traction control system did a great job – not once did we have any directional control problems.

I've mentioned before just how quiet the Model X is, though mainly what I talked about was the lack of engine noise.  As we use the car more, we realize that more than just the engine noise is missing.  For example, the windshield wipers are virtually silent, as is the seat positioning system.  I suspect that's not at all an accident.  The windshield wipers have another tricky bit of engineering to them: they squirt washer fluid directly out of the blades, not from a nozzle like every other car I've ever seen.  The result is that the windshield is washed without ever being obscured by mist, and only a very small amount of washer fluid is used.  Clever, that is.

After Debbie's appointment, we had lunch in Ogden, at the Sea Bears Fish House.  We've eaten there before and had excellent fish & chips, but this was our first visit since they moved to a new location in the old Union Station house.  Their new entrance is in the first photo below; the main room of the old station is adjacent (second photo).  It's quite a dramatic space, and a huge change from their old digs.  One change dictated by their new landlords: the staff is no longer openly carrying.  The waitress with a Glock strapped to her waist used to be one of the attractions here, but their new landlords object.  That's a bit surprising in Utah (people here are very comfortable with guns in general); we figure it must be another big city impact (Ogden is on the northern fringes of the Salt Lake City megalopolis).  While we missed the gun-toting staff, the food was still excellent. 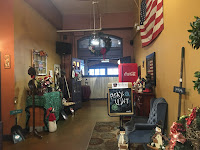 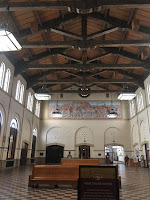 The drive back home on Wednesday started out great: the 15 had cleared up and we could drive at normal speeds.  But once we got to Mantua, above Brigham City, the conditions started to go south: the temperature dropped toward zero, and at the pass summit we started to get snow.  By the time we got down to Hyrum, it was snowing so hard that we had limited visibility – and I was worried about the accumulation in our driveway being so deep I couldn't get the Model X back in.  As it turned out, there were only about 3" on the driveway, and I got the Model X back into our garage without a problem.

But ... when we woke up yesterday morning, there was at least a foot of new snow on the ground.  Wednesday's plowing left big snow piles all around our driveway.  Where would I put all this new snow I had to plow up?  And would my little tractor and my snowplow be able to handle this giant accumulation?  These thoughts filled my head as I “suited up” for the snow removal job yesterday morning.  I started at first daylight, around 7:30 am.  I wore flannel-lined jeans, a flannel shirt, and my arctic coveralls.  I put Little Hotties in my mittens and boots, pulled my ear flaps down, and then went to work.

First step was to blow the snow out from in front of our garage, where my tractor can't get in to plow.  That didn't take long, perhaps a half hour.  My snow blower performed very well with this powdery snow – it could throw some of it almost 50' away.  Then I went to work with my tractor and snow plow.  I had to experiment a bit to come up with a set of tactics for moving this amount of snow.  First, the snow on the ground was so deep that my tractor would bog down if I just tried to drive through it.  But ... if I put the plow on the ground and pushed, as normal, then within 6' or so I had so much snow in front of the plow that the tractor would grind to a halt.  What I finally figured out was that I could plow it in layers, about 4' at a time.  The 4' is determined by the distance from the front of my front-mounted snow plow blade to the front tires of my tractor.  When the front tires ran into the unplowed snow, I'd come to a stop.  By plowing one layer after another, in three or four passes I could clear 4' or so of driveway down to the pavement.  Then I'd do it again to move the pile another 4' along.  As the pile built up, I'd need to make more and more passes, as I needed more and more layers.  This was tedious as hell, but it worked – even to make very tall piles around the periphery of our driveway (some of them are now over 8' tall).  It took me four and a half hours yesterday, and I was frozen solid by the time I got done (the temperature was right around zero).

Just as I was finishing the last bit of our driveway, my friend and neighbor Tim D. drove over on his tractor and asked if I could come give him a hand.  He's got a plow mounted behind his tractor, and he'd run into a major snag: he had nowhere left to put any snow!  Unlike with my front-mounted blade, he has no way to pile snow high.  His usual technique is to gather up a load of snow in front of his blade, then drive off into his yard and raise the blade to dump the snow.  You can't make a tall pile of snow with that technique, though – and with this much snow, he ran out of places to dump it.  He wanted me to push that snow up into piles for him, so he could use his “tail-dragger” blade to clear his driveway.  We worked in tandem for a couple hours (his driveway is much smaller than ours) and managed to finish it off.  By the time the day was done, I'd been doing snow removal work for almost seven hours!

Debbie and I went to Los Primos for lunch.  We each had a big bowl of their scrumptious chicken-vegetable soup, filling and warming in equal measures.  Yummy, it was!

This morning when I got up (around 5 am), the thermometer said -13°F.  The dogs all wanted to come back in the house very quickly! :)  There was no more new snow, thankfully.  The house was nice and warm, but my office was 23°F when I first got out here.  My the waxy goop in my lava lamp had completely congealed; the lamp couldn't heat it up enough to melt it.  I fired up my wood stove and now it's up to 52°F and climbing quickly.

Yesterday I read some interesting news: James Taranto, my favorite writer at the Wall Street Journal, was promoted to become the Opinion/Editorial editor.  He's been writing Best of the Web for years now, and he's consistently one of the more interesting voices on Twitter.  I enjoy Taranto's wit and writing style, but even more I cherish his clear-headed thinking and prodigious ability to connect political events displaced in time.  Having him edit the OpEd page at the WSJ is bound to make it appeal more to me.  So I did something I didn't think I would do: I renewed my subscription (dropped about a year ago) to the WSJ, taking advantage of their New Year's sale...
Posted by Unknown at (permalink) 7:03 AM No comments: