Laugh or Cry, Your Choice...

Also from Simon M., this little story about the evolution of mathematics education:


I purchased a burger at Burger King for $1.58. The counter girl took my $2 and I was digging for my change when I pulled 8 cents from my pocket and gave it to her. She stood there, holding the nickel and 3 pennies, while looking at the screen on her register. I sensed her discomfort and tried to tell her to just give me two quarters, but she hailed the manager for help. While he tried to explain the transaction to her, she stood there and cried.. Why do I tell you this? Because of the evolution in teaching math since the 1950s:

A logger sells a truckload of lumber for $100. His cost of production is 4/5 of the price. What is his profit ?

A logger sells a truckload of lumber for $100. His cost of production is $80. Did he make a profit ?

A logger sells a truckload of lumber for $100. His cost of production is $80 and his profit is $20. Your assignment: Underline the number 20.

A logger cuts down a beautiful forest because he is selfish and inconsiderate and cares nothing for the habitat of animals or the preservation of our woodlands. He does this so he can make a profit of $20. What do you think of this way of making a living? Topic for class participation after answering the question: How did the birds and squirrels feel as the logger cut down their homes? (There are no wrong answers, and if you feel like crying, it's ok).

ANSWER: His profit was $375,000 because his logging business is just a front for his marijuana farm.

I believe I've met the counter girl described in the first paragraph – I've had a very similar experience.
Posted by Unknown at (permalink) 4:20 AM No comments: 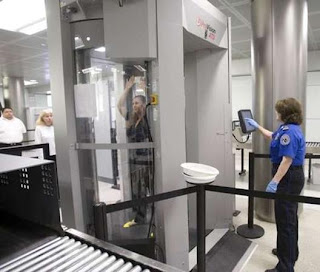 Reader Simon M. passed this along:


TEL AVIV, Israel The Israelis are developing an airport security device that eliminates the privacy concerns that come with full-body scanners. It's an armored booth you step into that will not X-ray you, but will detonate any explosive device you may have on your person.

Israel sees this as a win-win situation for everyone, with none of this crap about racial profiling. It will also eliminate the costs of long and expensive trials.

You're in the airport terminal and you hear a muffled explosion. Shortly thereafter, an announcement: Attention to all standby passengers, El Al is proud to announce a seat available on flight 670 to London. Shalom!

Posted by Unknown at (permalink) 4:13 AM No comments:

In 2008, Dr. James Annan (a prominent anthropogenic global warming proponent) made a £100 (about $150) bet with Dr. David Whitehouse (a skeptic) that by the end of 2011 there will have been a new record for warming.

There was no new record set.  Dr. Whitehouse won...
Posted by Unknown at (permalink) 4:09 AM No comments:

Court reporters and close-captioners have been “typing” at the high rates of speech (up to 255 words per minute) for a long time.  They aren't really typing in the sense we normally mean it; instead they are recording the sounds of speech – the phonemes – using a special stenography machine (basically, a typewriter for phonemes).  Long ago stenographers developed a way of writing these sounds by hand.  In both cases, the end result is basically a list of sounds, which the stenographer must then manually convert to typed text (at normal typing speeds!).

In the late 1970s, several companies developed computer-based systems that sped this process up enormously by automating that last step of converting the list of sounds into typed text.  One of these companies (Xscribe) was based in San Diego, and about a million years ago, I worked for them as a hardware and software engineer.  It was a very interesting place to work at the time, as they were pushing the envelope on what you could do with a microcomputer.

Today there's very little trace remaining of Xscribe.  The company struggled on into the '90s, went public, but then seems to have disappeared.  Google the name and you can find people selling spare parts (apparently those systems are still being used!), but that's about it.  The domain name xscribe.com now shows the page for Stenograph Corporation, who was Xscribe's main competitor in the period I was there ('81 to '82).  I found conflicting news stories about possible acquisition of Xscribe by Stenograph or its parent company Quixote.  In any case, Xscribe appears to have failed in the end.

Now there's an open source program that does basically the same thing that Xscribe's (very expensive) hardware and software did.  It uses a $45 gaming keyboard as its input device, a normal PC, and the free open-source software package named Plover...
Posted by Unknown at (permalink) 4:03 AM No comments:

Check out this awesome crow (and read more about it):

Posted by Unknown at (permalink) 3:39 AM No comments: