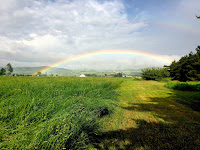 Paradise ponders...  While I was setting out sprinklers for our lawn this morning, the glorious rainbow at right suddenly lit up right in front of me.  The conditions were nearly perfect: a rain squall passing to our west (headed north), and the early morning sun shining through a hole in the clouds from the east.  If you embiggen that photo and look closely, you'll see that there are two additional (much dimmer) rainbows besides the primary one.  One is just below the primary; the other is about twice the radius of the primary.  Both were clearly visible to the naked eye; the camera didn't do a great job of capturing them.

As I was drinking my tea this morning, I spotted Tim D. walking toward his hand line (irrigation pipe), getting ready to move them.  I pulled on my boots and went out to help, and the two of us spent a very companionable hour moving his three strings of hand line.  For each cycle of irrigation, we move those pipes six times, in 30' increments, so that the entire field gets watered.  Generally he irrigates about once every 10 to 15 days, so about a third to half of summer mornings we need to move hand line.  This morning, we mostly we shared our thoughts about the beauty around us, and it truly was a gorgeous morning.  The skies were mostly cloudy, but the occasional holes in the clouds led to bright sunlight playing over the hills and mountains around us.  Every piece of land in sight is a beautiful green right now, and washed clean by yesterday's rainstorm.  Everywhere we looked we saw life: crops, pastures, cattle, sheep, horses, and more.

I love this place, and the people in it!
Posted by Unknown at (permalink) 10:47 AM No comments:

Willpower and the 1964 Surgeon-General's report...

Willpower and the 1964 Surgeon-General's report...  My mom was a 3-to-4 pack a day cigarette smoker for about 12 years, from age 17 to 29.  U.S. citizens younger than about 60 would likely be surprised by just how normal that was.  In 1955, about 56% of adult men (and about half that percentage of women) were smokers.  Mom's smoking habit wasn't at all unusual back in those days.

I have some memories of her smoking, but even more memories of an errand she often had me do: running into the pharmacy with some change to buy her a pack or two of Kent menthol cigarettes.  It seems very odd, these days, to think that a pharmacy would be the place to buy cigarettes, but that's where she usually bought them.  I found that little errand exciting, as it seemed like a very grown-up thing to do for someone my age (I did this for a few years starting at about age 8 or 9).

On January 11, 1964, my mom quit smoking.  Cold turkey, immediately upon hearing the news reports of the Surgeon General's report on the health hazards of smoking – and his recommendation that all smokers immediately quit.  I remember her searching out and throwing away all the packs of cigarettes she had squirreled away in convenient places.  All the ash trays in the house were cleaned and put away.  I was just 11 at the time, so I didn't understand that she was doing something that most people find difficult; she never showed any sign that quitting was hard for her at all.  I remember her urging her father to quit (he did not, and emphysema claimed him not many years later), along with several siblings.  To the best of my knowledge, she was the only smoker in her family to quit at the time.  I never saw her waver in her determination to quit smoking: she heard the report, made up her mind, and just quit.  Right then.  Just one attempt.  No nicotine patches or gum.  No furtive tokes when she thought nobody was looking.  She made quitting look effortless.

This is one example of an important element of mom's character: her amazing willpower.  It manifested in quite a few ways, some of which will be the subject of other posts.  Her willpower is legendary in our family, with good reason.  This is the earliest example I know of, though I'm sure it didn't spring up fully formed on that day.

To this day I have never heard of another person who quit smoking, cold turkey, on the day the Surgeon General issued that report...
Posted by Unknown at (permalink) 10:26 AM 1 comment: