Can you figure out how he did it?

Can you figure out how he did it?  Before I played this video, I tried to figure out how he might have gotten that nail in there.  I came up with two methods, but both would be visible if you looked at the wood closely.  What he actually did is undetectable, and wicked clever!
Posted by Unknown at (permalink) 10:41 AM No comments:

I'm the President? No way!

I'm the President?  No way!

Maybe the young folks aren't quite as gullible as Obama assumed...

Maybe the young folks aren't quite as gullible as Obama assumed...   First we hear that ObamaCare premiums are significantly higher than our old healthcare premiums.  Now we hear this:


Insurers say the early buyers of health coverage on the nation's troubled new websites are older than expected so far, raising early concerns about the economics of the insurance marketplaces.

If the trend continues, an older, more expensive set of customers could drive up prices for everyone, the insurers say, by forcing them to spread their costs around. "We need a broad range of people to make this work, and we're not seeing that right now," said Heather Thiltgen of Medical Mutual of Ohio, the state's largest insurer by individual customers. "We're seeing the population skewing older."

On the one hand, I hate to hear about my premiums going up even more than I already thought they would.

But on the other hand, if the young folks aren't being taken in by the pile of bullshit that The One and his progressive acolytes are handing out ... well, that's actually kind of a good thing...
Posted by Unknown at (permalink) 10:33 AM No comments:

Posted by Unknown at (permalink) 10:29 AM No comments:

UTA Flight 772...  A French airliner flying over Africa in 1989 was bombed by Libyan-sponsored terrorists.  It came down, in pieces, into the Saharan Desert in Niger – one of the most remote and inhospitable places on the planet.  Including passengers and crew, 170 people died that day.  In 2008, families of the victims gathered at the crash site and built a memorial (ground-level view at right), using rocks trucked in from almost 50 miles away and incorporating pieces of the plane's wreckage.  The monument is so large that you can see it from space.   Google maps view.
Posted by Unknown at (permalink) 10:27 AM No comments:

A “flock” of hope?  My mom lives in a small community outside Charlottesville, Virginia.  This morning she voted at her local polling place, which happens to be in a church.  She wrote me about the experience:


I just want to share a self administered grin I had this morning...  The local papers and TV news have been touting the fact that today's vote in Virginia is a referendum on ObamaCare.  Well there was a very large (and I do mean large) flock of vultures over the church where I vote this morning, and I am thinking it is a sign that "it" is about to be killed or is killed and just now beginning to stink???  Anyhow, I smiled going in to vote...

India launches a rocket to Mars...

India launches a rocket to Mars...  So far everything is working perfectly.  The vehicle is currently in Earth orbit, awaiting a burn to launch it toward Mars in about a month.  If all goes well, it's due to arrive in Mars orbit on September 14 next year.

My own indelible impressions of India were formed way back in the '70s, when I made a brief visit to Ceylon (now Sri Lanka) and New Delhi.  Those impressions were of abject poverty, overwhelming infrastructure problems, and a people struggling for survival – the very opposite of the kind of nation that could do something as grand and advanced as launching a robotic exploration mission to Mars.

But they've done it – in just 40 years, they've gone from the hopeless-looking mess that I saw to a member of the top tier of nations.  Like all nations, they have plenty of problems – but the magnitude of their improvement in that time is simply stunning...
Posted by Unknown at (permalink) 8:20 AM No comments:

Aluminum wire sculptures...  I'd never have thought it was possible to make such beauty from plain old aluminum wire!

The artist is Seung Mo Park.  Story, pictures, artist's web site.
Posted by Unknown at (permalink) 8:10 AM No comments:

White House smears cancer survivor who lost her policy...  And the web fights back.

Despicable behavior, politically motivated.  Don't any of these jerks care about their country and its citizens?
Posted by Unknown at (permalink) 7:54 AM No comments:

Adobe encrypted passwords instead of hashing them...

Adobe encrypted passwords instead of hashing them...  That's bad, as in incompetent amateur level bad.

If you're not technical, here's the reason it's bad: with encrypted passwords, it's possible that a hacker could discover the encryption keys and recover all the passwords “in the clear” (as someone would type them).  With hashed passwords, that's not possible – nothing the hacker could do would ever recover all the passwords – the best he could do would be to break into a few accounts.

For shame, Adobe, for shame.

I wonder how many other major companies doing something this stupid?
Posted by Unknown at (permalink) 7:52 AM No comments:

Sending humanitarian aid to North Korea is a mistake...

Sending humanitarian aid to North Korea is a mistake...  So says Jo Jin-hye (at right), who escaped to China from North Korea after most of her family died of starvation – and she said it to a United Nations commission, who is reviewing the U.N.'s continued sending of hundreds of millions of dollars in aid.  Most humanitarian organizations have long since concluded that it was useless to send aid to North Korea, as it all ends up in the hands of the ruling class, not those who so badly need it – and that's exactly the message the commission got from Jo Jin-hye.

Let's hope they listen to her.
Posted by Unknown at (permalink) 7:46 AM No comments: 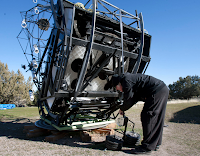 A 70-inch amateur telescope...  Holy smokes, mirror-man!  This is just amazing – an amateur just southwest of Salt Lake City, Utah bought a surplus 70-inch diameter mirror.  It was originally destined for a spy satellite, but was slightly chipped during manufacture.  Mike Clements – a trucker – then designed and built all the rest of what was needed to turn it into a functioning astronomical telescope.

Story, slide show.  Awesome, dude!
Posted by Unknown at (permalink) 7:40 AM No comments:

A professional analyzes the ObamaCare web site...  Over at Ace of Spades HQ, a guest blogger who is a professional IT project fire-fighter (he comes in to analyze and fix IT projects that went horribly wrong, and has done this dozens of times) takes a crack at what went wrong with the ObamaCare web site.  The piece is excellent...
Posted by Unknown at (permalink) 7:03 AM No comments:

6TB in a 3.5 inch form factor...  HGST (part of Western Digital) announced a line of new hard drives packing 6TB on 7 platters into a 3.5 inch form factor.  The advance was enabled by their perfection of helium-filling the platter enclosure (given the small size of those molecules, that's quite a trick).  The low density of the helium reduces aerodynamic drag on the rotating platters and moving heads, making the whole thing more efficient.  They're also hermetically sealed, so they can even be liquid-cooled.  The announcement says they're in general availability, though I was unable to find them for sale anywhere.

Every time I think we're about to write the epitaph for moving magnetic media, one of the vendors comes up with some new trick to extend hard drive capabilities even further.  This drive holds just over 1 billion times as much data as my first hard drive – and that one was the size of a washing machine...
Posted by Unknown at (permalink) 6:57 AM No comments:

Quote of the day...  I lost part of my morning tea through my nose when I read the sentence below, near the end of another excellent piece by Megan McArdle on the unfolding disaster that is ObamaCare:


Because of the Universal Law of Turkey Accretion, the quality and effectiveness of a government agency’s personnel are likely to peak very shortly after that agency is established.

The lady has both wit and a way with words.  I should have known better than to have slurped tea while reading one of her pieces, but somehow I didn't expect humor in a piece talking about why the ObamaCare web site is so awful.  In fact, as I was reading her description of why large government IT projects almost always fail, I was nodding my head in agreement – I think she's got it exactly right, and as usual she's explained it in a way that non-technical people can readily understand...
Posted by Unknown at (permalink) 6:43 AM No comments:

Thoughts on aging...  Sent to me by a friend who wishes to remain anonymous:


Q: Where can single men over the age of 60 find younger women who are interested in them?
A: Try a bookstore, under Fiction.

Q: What can a man do while his wife is going through menopause?
A: Keep busy. If handy with tools, you can finish the basement. When done, you have a place to live.

Q: How can I increase the heart rate of my over-60 year-old mate?
A: Tell him you're pregnant.

Q: How can I avoid that terrible curse of unsightly wrinkles?
A: Take off your glasses.

Q: Seriously! What can I do for these crow's feet and all those wrinkles on my face?
A: Go braless. It will usually pull them out..

Q: Why should 60+ people use valet parking?
A: Valets don't forget where they park your car.

Q: Is it common for 60+ year olds to have problems with short term memory storage?
A: Storing memory is not a problem, retrieving it is the problem.

Q: As people age, do they sleep more soundly?
A: Yes, but usually in the afternoon.

Q: Where should 60+ year olds look for eye glasses?
A: On their foreheads.

Q: What is the most common remark made by 60+ year olds when they enter antique stores?
A: "Gosh, I remember these."

That last one has happened to me all too often, especially with respect to electronics and computer software.  Having started designing electronics with vacuum tubes, and having first written software on machines with sub-megahertz clocks makes me prone to this :)
Posted by Unknown at (permalink) 6:35 AM No comments:

Strangers, but couples...  A crazy idea well implemented, with fascinating – and somehow hopeful – results...
Posted by Unknown at (permalink) 6:31 AM No comments: