Slightly Loony...  That's me – my handle for this blog and lots of other places.  I originally used it as my eBay handle, but people liked it so much I started using it for all sorts of things.  My brother Scott discovered this somehow, and created the sign at right for me.  He used a beautiful piece of driftwood as the substrate, then hand-painted the reset of it.  The sign is the perfect size to go over a door, so I'm going to put it over my office door, once I build the office. 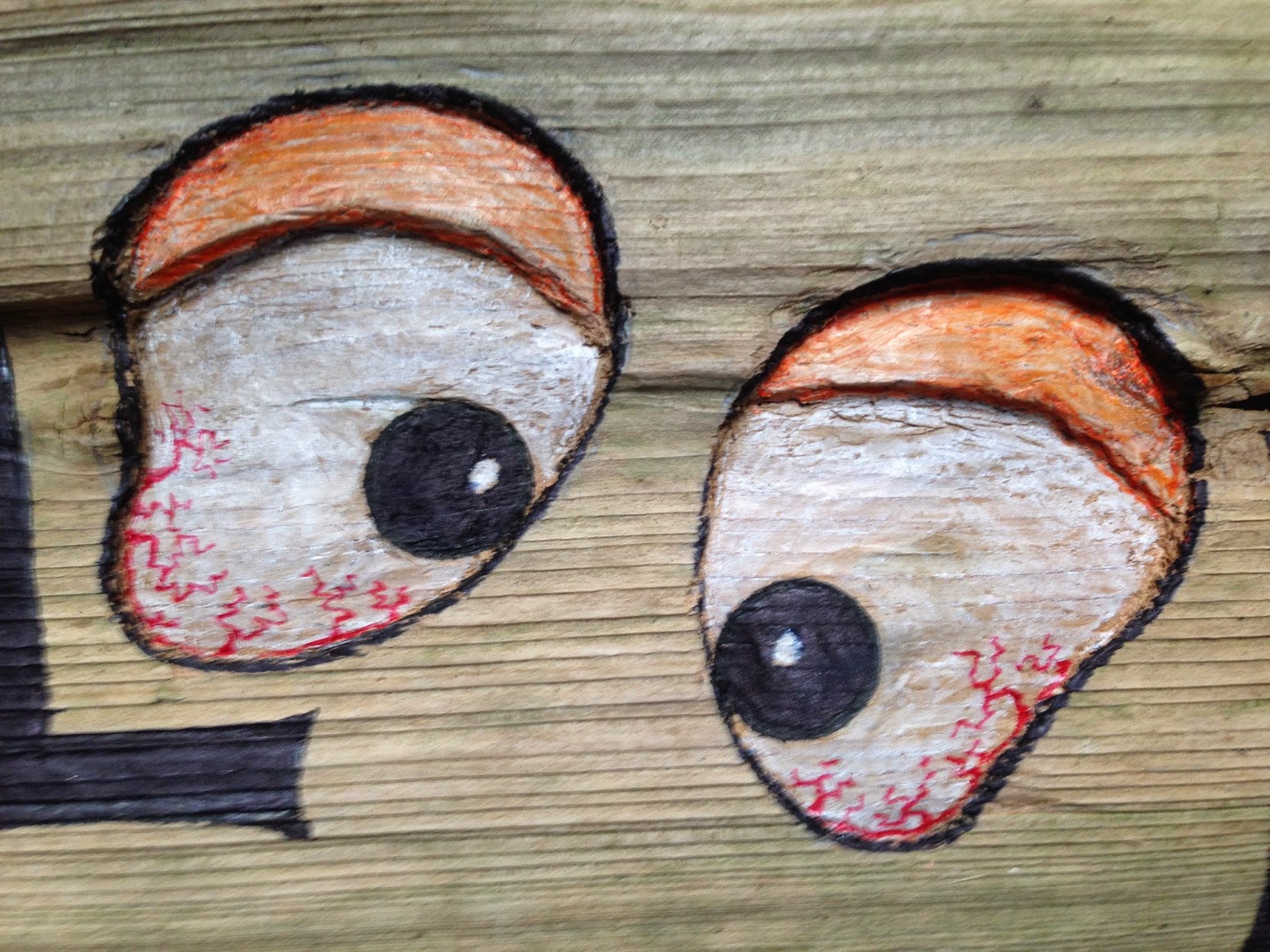 Those crazy eyeballs are worth a closer look (click to embiggen).  Those have the look of a logo to me :)


Posted by Unknown at (permalink) 2:04 PM No comments:

Cat isolation...  One of the challenges with putting all our cats (well, all but one) into a single-room cattery is that we no longer had any natural way to isolate cats that are being treated, have a behavior problem, etc.  In our Jamul home, we had several rooms that could be pressed into service as a cat dormitory – great for the cats, not so convenient for the humans.  In our new home we resolved to stop doing this, so that we can have nice things in most of the rooms and they will not be destroyed by a misbehaving cat.  The single-room (it's a big room!) cattery was the answer.  But then how can we isolate a cat if need be? 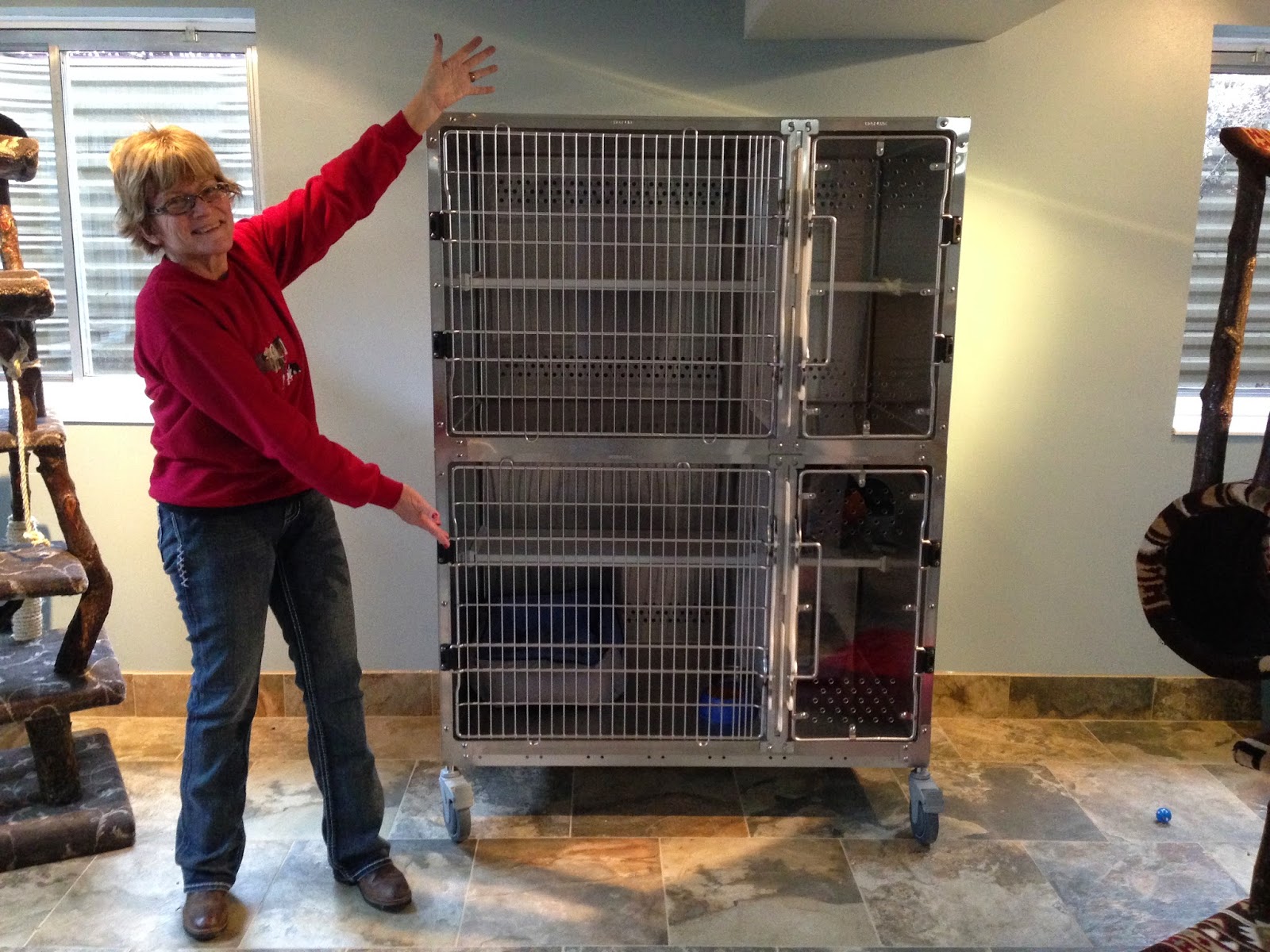 The simple answer is to use one of our large plastic cat carriers.  Those are quite inconvenient, though, as this isn't the purpose they were designed for.  Furthermore, those carriers have lots of nooks and crannies that trap ... stuff ... which is exactly what you don't want in an isolation setup.  Veterinarians have this same problem, in spades (since basically every patient needs to be isolated).  We looked at how they solved it.  The answer was stainless steel living quarters, designed to be easy to clean, sturdy and durable, and configured in a manner convenient to both human and feline.  We bought the setup in the photo (with Debbie happily showing it off!), a Shor-Line model that has two cages, one atop the other, mounted on wheels.  It's an expensive system, but it was recommended to us by a veterinarian we trust, and it's the sort of thing you can depend on buying just once.  It's designed for the kind of use a vet's office would give it; our use will be much lighter.

The unit arrived yesterday in a 7-foot high stack of 9 cardboard boxes on a pallet.  Two of the boxes were large enough to be one of the cages; the others were all like giant pizza boxes.  This morning we resolved to unpack and install this thing.  There were more challenges than we expected :)

First challenge: how do we get this thing into the cattery?  The most obvious route would require traversing three 30" doors, and the assemblies in the large boxes were just over 30" wide.  I thought we were in trouble at that point, as the cages are mostly welded construction.  After inspecting them more closely, though, I realized I could take a couple inches off one dimension by removing things like the door hinges and latches, and a brace.  I removed all them, and we made it through the doors with about 1/4" to spare.  Whew!

The final challenge involved five stainless steel panels.  Each of these had been bent from laser-cut stainless steel sheet.  The plastic “shield” that protects the metal next to the cuts from laser and molten/gaseous steel problems was bonded to the steel with an adhesive that you could pull free.  The trouble was that pulling all that plastic off was quite hard work.  We spent more time removing those #$(@#)_#@$ sheets of plastic than we did on everything else put together!

Finally, though, we got the thing all assembled, rolled it over to its home in the cattery, and put its first resident in place.  Kama is being isolated until he learns to behave nicely to the other cats.

Overall we're quite happy with the unit.  It's very nicely made, sturdy as the proverbial tank, and the ergonomics for both human and feline are great.  We sure would like to have had assembly instructions (especially to get the order of assembly correct!).  And that damned plastic film really needs to be removed by the manufacturer.  If I ever receive anything using that stuff again, I think I'll refuse shipment...
Posted by Unknown at (permalink) 1:56 PM No comments:

Restore your faith in humanity...

Restore your faith in humanity...  Well, it didn't quite do that, but it's a heartwarming video nonetheless.  Via reader Simi L...
Posted by Unknown at (permalink) 6:50 AM No comments:

Lea...  She's our 17 year old field spaniel, and she's going downhill fast.  Yesterday we were worried about her enough to have the local vet take a look at her.  There was no indication that she was in pain, but the vet prescribed a steroid (prednizone) in the hopes that it will help with the arthritis and general stiffness.  Lea's already outlived the predictions of the oncology vet, but we can easily tell that the tumors in her mouth and throat are growing.  Chances are that they've spread to other organs and have started growing there, too.  We don't expect to have her with us much longer; we're taking it day by day at this point.  We're consoling ourselves with the thought that she's already done the unexpected: lived long enough to actually see our new home in Utah, and feel her paws in the grass there.  Someday soon, we know we'll have a very sad decision to make, and we're steeling ourselves for it...
Posted by Unknown at (permalink) 6:48 AM No comments:

Progress report...  We finally got the last of the stuff in the trucks unloaded into the house.  Debbie has got the kitchen almost entirely unpacked, and is probably 90% done with the bedroom.  I started off the day with the intent to get some unpacking done, but fate decided otherwise.

First, the (expected) inspector showed up around 9:30 am, made happy noises about the now leak-free gas line, and then proceeded to tell me a couple things that sounded like they'd derail the entire use-the-barn-in-the-winter notion.  He said he couldn't sign off on our line until we had (a) submitted a diagram, and (b) installed a tracer wire along the gas pipe.  Nobody had ever mentioned to us that we'd need a tracer wire.  The pipe has been covered with 2' of dirt for nearly its entire length (275'), so putting that tracer wire in would take a lot of work – and there's no way we'd have it installed before the ground froze.  Yikes!  I managed to talk him into letting me submit an informal diagram, and (most importantly) to let me wait until spring to put that wire in.  That was a close call!

So then we called the gas company to come hook up the barn, and the plumber was already here connecting things inside the barn.  The gas company showed up at 1 pm and went to work.  They had to change out the meter on our house, and raise the pressure into the meter from 0.5 psi to 2 psi.  They did all that work, then got ready to leave – when I noticed that the output of the meter was just dangling in the air, not connected to the house.  “Aren’t you forgetting something?”, said I.  “Oh, no,” said they, “connecting the output is your problem.  Better call a plumber!” This is late in the afternoon on the Friday before Christmas – good luck with that!  I can't believe nobody ever mentioned this little requirement before!

Luckily for me, the plumber working on my barn agreed to install the required stuff on my meter.  He had to run into town to buy parts, then come back out to do the work.  He also had to call in another truck to help him out.  After an hour or so of work, they got our house hooked back up to the gas line, so we had heat, hot water, stove, etc.  Minor little things like that.  Yikes!

On Monday the final plumbing inside the barn should be done, and at that point I can turn on the barn's heat.  Woo hoo!  However, there's still a bit of sheathing and insulating that needs to get done before that would be ... economically attractive.

Yesterday we also took delivery of a couple of stainless steel kennels that we'd ordered a few months ago.  These are the sorts of kennels you'd see in a vet's office.  We're going to use them for cats or dogs that need to be isolated.  The kennels weigh 225 pounds apiece.  I was expecting them to come as a kit, with all the sides broken down.  Instead, they appear to be mostly assembled.  On the concrete apron outside our garage there's a pallet with boxes piled 7' high.  Unpacking that, and moving it all down to the cattery, is this morning's job...
Posted by Unknown at (permalink) 6:44 AM No comments: