Oh, come on – surely they're not that stupid?

Oh, come on – surely they're not that stupid?  Apparently when it comes to ObamaCare and IT, they are.  Megan McArdle agrees.  There doesn't seem to be an upper bound to the idiocy that pours forth from the ObamaCare implementation...
Posted by Unknown at (permalink) 10:47 AM No comments:

I wonder if I could get this engraved on my pistol? 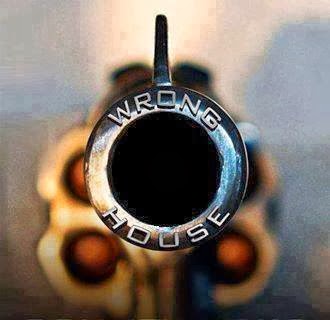 I wonder if I could get this engraved on my pistol?  Seems like a good message to send an intruder, assuming they can read English.  Might need a localized version in these parts.  Via my mom, who has excellent taste in engravings...
Posted by Unknown at (permalink) 10:41 AM No comments: WWII memorials in Yugoslavia...  Some of these are pretty darned weird...
Posted by Unknown at (permalink) 10:38 AM No comments:

Even more?  Yes, it's true – a high-level administration official (Teresa Fryer, Chief Information Security Officer for the Centers for Medicare and Medicaid Services) told Congress that her teams are still finding high-level security risks with the federal ObamaCare web site – and that she wanted to shut the site down before it launched, but was overruled.

It's almost like they hired the DMV to run our healthcare, and then put politicians in charge!  Wait – that is what they did!
Posted by Unknown at (permalink) 10:37 AM No comments:

Slouching toward bankruptcy...  Another top-notch article in Reason by Veronique de Rugy, this time on the coming Social Security disaster.  The magazine version includes a nice graphic that's missing online for some reason...
Posted by Unknown at (permalink) 10:25 AM No comments:

What comes after epic?

What comes after epic?  Full-screen for this one, folks!
Posted by Unknown at (permalink) 10:22 AM No comments:

The Girls of Atomic City...

The Girls of Atomic City...  I meant to write about this a few days ago, and just plain forgot.  This is another great book I finished earlier this week: The Girls of Atomic City: The Untold Story of the Women Who Helped Win World War II, by Denise Kiernan.  Other history books I've read had given me just a glimpse of the amazing story behind the Oak Ridge uranium and plutonium enrichment facility that played such a key role in the development of the atomic bomb.  This book filled in lots of fascinating detail about what it was actually like to be part of it.  I'd like to have seen more about the actual workings of the plant, but this book is excellent at conveying the human side of the story – mainly from the viewpoint of a number of women who actually did work there.  I was engrossed from the very first page, and when I finished, I wanted more...that's not that common an occurrence with history books :)
Posted by Unknown at (permalink) 10:16 AM No comments:

Need good references for a job?

Need good references for a job?  They're for sale.  Good grief!  I'll bet this sort of thing was also available before the Internet, and I just never heard of it...
Posted by Unknown at (permalink) 8:47 AM No comments:

Presidential Panel to Obama: stop being stupid!  I may have changed their wording slightly, but that's the gist.  That One appointed a panel of experts a while back to investigate the NSA revelations and make recommendations for appropriate changes.  The panel's report is evidently a tad testier and stronger than That One anticipated (according to reports leaking from the very leaky White House).  One of those recommendations is strongly worded, saying that the NSA should get out of the business of making encryption standards weaker.  The rest of the world says “Well, duh!” – but not, apparently, That One's administration.  Reports are that the internal debate about weakening encryption rages on – quite a few within the administration rather like the fact that they can now read everyone's mail...
Posted by Unknown at (permalink) 8:46 AM No comments:

Curiosity is looking at something interesting...

Curiosity is looking at something interesting on Mars...  I have no idea what this is, but the latest trove of images from Mars rover Curiosity includes the close-up, focus-merge shot at right.  I suspect it's from the piles of white, powdery-looking dirt in this wide-angle photo...
Posted by Unknown at (permalink) 8:39 AM No comments:

Over 75% of data underlying science studies lost?  So says this recent study (whose data is likely to be lost soon!) that looked for the data behind 516 studies published between 1991 and 2011 – and found it for only 23% of them.

This is part of a larger consequence of the computer revolution: compared to documents (including science data) on paper, documents in computers are ephemeral.  They get deleted, lost, or are stored on media that nobody can read any more.  While many proposals have been made to address this, none have gained any serious acceptance...
Posted by Unknown at (permalink) 8:30 AM 2 comments:

Aurora borealis...  Captured by an airliner passenger, looking out the window.  Awesome!  Backstory here.  You'll definitely want to full-screen this one!
Posted by Unknown at (permalink) 8:23 AM No comments:

California leads the way!  In finding new ways to steal money from companies hold companies liable for things they didn't do wrong.

The short version: decades ago, several companies sold a product that was not only legal and believed to be harmless, it was a product that our government actively encouraged people to use (because it aided in keeping our homes germ-free).  Many years later, scientists discovered that the product could be harmful under certain circumstances.  Now a California court has held that those companies that have survived will have to pay billions of dollars to remove this product from the homes in which it was used.  In other words, these companies are being told that they must bear the cost of removing a product that was legal and government-sponsored when it was sold.  This ruling will also open the door to nearly unlimited liability suits, too – just as happened with a very similar product (asbestos) and eventually bankrupted almost every company that ever even looked at asbestos.

The product this time is lead paint, and the risk comes from children who ate paint chips...
Posted by Unknown at (permalink) 7:20 AM No comments:

Our best wishes for Father Victor Mariestela...  We just read this morning that he was seriously injured by a drunk driver on this past Tuesday night, on our very own “Highway of Death”, aka SR 94.
Posted by Unknown at (permalink) 7:13 AM No comments:

This really smacks of desperation...

This really smacks of desperation...  That One's administration, late yesterday exempted from the individual mandate all those whose healthcare insurance has been cancelled and who haven't signed up for ObamaCare (for whatever reason).  At the same time, those people are now suddenly declared eligible for ObamaCare's so-called “catastrophic” insurance plans (under the law, these are available only to people under 30) – really these are bare-bones insurance plans more akin to traditional major medical plans, and most definitely not what ObamaCare was enacted to achieve.

Insurance companies are very unhappy about this sudden change in the rules, as it completely upsets all the calculations used to set their policy rates.  These calculations assumed that the law would be followed – an assumption that looks sillier as the days under That One's rules go by.  Once again, That One has asserted the executive branch's non-existent right to simply ignore the law, whenever and wherever it feels like it.  Like a monarch or dictator would.  Just sayin'...
Posted by Unknown at (permalink) 7:08 AM No comments:

Think ObamaCare is bad in your state?

Think ObamaCare is bad in your state?  You should see what it's doing to the territories!
Posted by Unknown at (permalink) 6:59 AM No comments: