Here's a simple, concise, and beautifully written summary of what happened in this year's elections, and what needs to happen in 2012:


The meaning of the 2010 election was rebuke, reject, and repeal. We rebuked Washington’s power grab, rejected this unwanted “fundamental transformation of America,” and began the process to repeal the dangerous policies inflicted on us. But this theme will only complement the theme of 2012, which is renew, revive, and restore. In 2012, we need to renew our optimistic, pioneering spirit, revive our free-market system, and restore constitutional limits and our standing in the world as the abiding beacon of freedom.

Written by Sarah Palin in the National Review.  You know Sarah – she's that woman whose intellect the left (and half the right) loves to despise.

That ability to communicate a conservative message so clearly...does that remind you of anyone???
Posted by Unknown at (permalink) 11:20 AM No comments:

At right is an updated copy of a graph I've been publishing periodically for the past year and a half (click to enlarge).

His plan was passed and is now being played out.

The red dotted line are the “actual” unemployment numbers.  Note that they are worse than what he said would have happened if we didn't pass his plan.  So if we buy his own logic, his plan made the unemployment worse, not better.

The teal dotted line is Timmy Geithner's current forecast for unemployment – still at 8% for the 2012 campaign.  That can't make his boss too happy.

And naturally, since these numbers are provided by the government, they are significantly “cooked” through many “adjustments” (this is not an Obama innovation; this has been going on for decades).  The worst of these is simply leaving out all those people who have been unemployed longer than six months (and that's a lot of people!).  The convenient, but clearly incorrect, assumption is that these people have given up looking for work.  Depending on which source you choose to believe, including these people would add between 8 and 12 percentage points to the government-published numbers, making the real unemployment rate somewhere between 17% to 21%.
Posted by Unknown at (permalink) 7:19 AM No comments:

Posted by Unknown at (permalink) 7:06 AM No comments:

There are many things I didn't like about George W. Bush, and many things I did like.  Amongst the latter: his general adult demeanor and frequent demonstrations of classy behavior.  These are prominently on display in his recent interview with Oprah.  I sure miss that part of W...
Posted by Unknown at (permalink) 7:05 AM No comments:

What the Hell Happened in California on Tuesday?

Yup, this about sums it up: 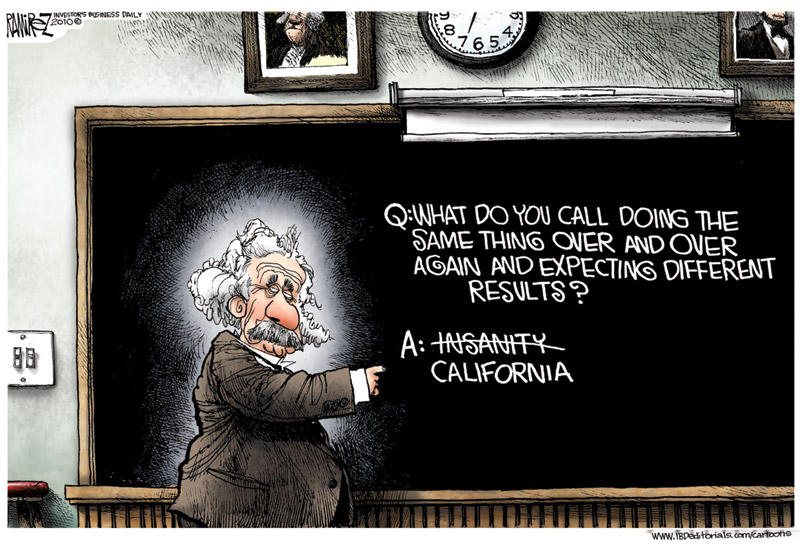 Funny, cute, and clever.  Take a minute to watch... 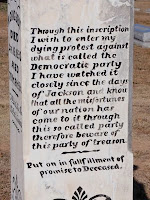 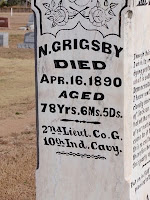 ...Nathaniel Grigsby had it figured out (click to enlarge the right-hand photo so you can read it).  More information here, and Snopes confirms it.
Posted by Unknown at (permalink) 6:50 AM No comments:

Obama Asks For It...

The U.N. Human Rights Council (UNHRC) is a long-standing joke paid for largely by U.S. taxpayers.  Current members include such exemplary human rights examples as Iran, Cuba, Libya, and North Korea.  Until Obama's administration, basically the U.S. held its nose, forked over its share of the payment, and studiously ignored the UNHRC.

But the Obama administration decided to be more participatory, sending three State Department representatives to be grilled by the UNHRC on questions about the U.S.'s human rights performance.  Naturally, the UNHRC members gleefully took the opportunity so stupidly provided, lecturing the U.S. representatives.  For example, the North Korean representative told the U.S. “to address inequalities in housing, employment and education”, and to “prohibit brutality…by law enforcement officials.”

But it got worse.  After three hours of such treatment, Michael Posner (Assistant Secretary, Bureau of Democracy, Human Rights and Labor) said “thanks to very many of the delegations for thoughtful comments and suggestions”.

I'm sure the UNHRC members have greatly increased respect for the U.S. after this experience...
Posted by Unknown at (permalink) 6:37 AM No comments:

This is Really Hard to Imagine...

Conjoined twins whose brains are linked...
Posted by Unknown at (permalink) 6:25 AM No comments: