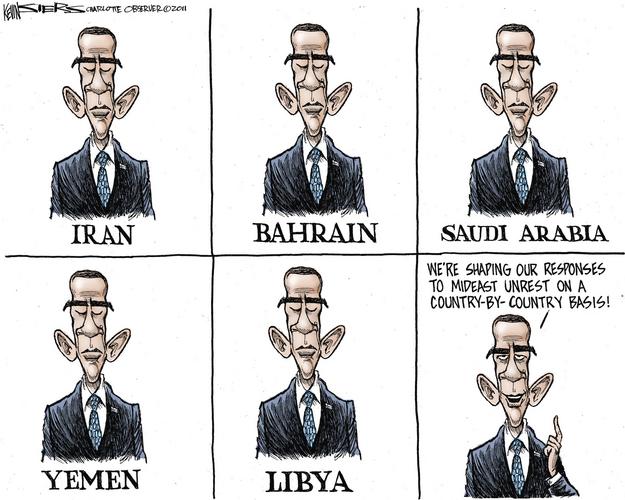 Posted by Unknown at (permalink) 5:37 AM No comments:

The past week has been particularly eventful, with the seismic disaster in Japan and the Libyan struggle topping the long list.  Periods like this make all of us long to see strong and effective leadership from someone (or even some group).  Such leadership provides us all with reassurance that someone is looking out for us, but more importantly, actually affects the course of events.

For Americans, most of all we hope to see that leadership in our President.  Our President has been completely AWOL (absent without leave), preferring to play golf and record basketball advice.  My own reaction to this is first shame and dismay, second to hope that the 2012 elections bring a change.  At this point, almost any conceivable change would be hopeful.  While many of the 2012 candidates on the Republican side are not particularly attractive to me, I can't think of one at the moment who would be worse than Obama.

For others, organizations like the EU or the UN are where one might look to for leadership.  The U.N. can't even bring itself to expel Libya from the Human Rights organization.  Worse, China and Russia both are blocking any possible effective action.  And have you seen the U.N. leading the way on helping Japan?  Of course not.  The U.S. Navy was there before Ban managed his first flaccid, platitude-filled speech on the subject.  A couple of European national leaders (from France and Italy) managed to sound aggressive on the subject of Libya, but they quickly shut up after the EU weighed in with “caution”, and of course they've done absolutely nothing concrete.  Meanwhile, Libyans fighting to get out from under Gadaffi are being slaughtered.  It's hard to say what the situation is from the news, but it looks to me like it's just a matter of days before Gadaffi has managed to suppress the revolution.  Somehow I don't think revolutionary supporters will find him to be merciful.

All in all, a bad week for demonstrated leadership.  As others has observed before me, there are periods in history where the world seems to slip into just this sort of rudderless mode.  Such periods are often followed by cataclysmic wars.  The runup to World War II was just such a period.  Let's hope that we can manage to get some effective leadership in place before that happens again.  The U.S., as the sole superpower, is the most likely place for such a leader to emerge.  Maybe we'll manage to elect one next year...
Posted by Unknown at (permalink) 5:35 AM No comments:

The Flute is as Big as She Is!

Would you like to know where the federal spending dollars are actually going?  It's not all that mysterious, despite the best efforts of your elected representatives and the media to keep you from finding out.  Tigerhawk does a great job of laying it out (and links to even more)...

I'd be all for an amendment requiring voters to have a basic understanding of how government functions and where tax dollars are going.  No understanding, no vote...
Posted by Unknown at (permalink) 5:16 AM No comments:

Written for someone like me, who knows nothing at all about it.  Fascinating stuff...
Posted by Unknown at (permalink) 5:13 AM No comments:

On the nuclear situation in Japan, from MIT scientists.  This article is very readable, and contains all sorts of actually useful information, as opposed to just about every news report I've read...
Posted by Unknown at (permalink) 5:12 AM No comments: