Networking in Paradise...  In response to a reader's question: the network cable tester I have is the Fluke MS2-100, pictured at right.  It has a basic TDR (Time Domain Reflectometer) built in – no analog display, but it tells you the wire distance from the meter to any problem.  It detects opens, shorts, and pairing.  Having this thing in my toolkit has saved me hours of manual troubleshooting.  Just on this job I've used it to tell me exactly where three separate wiring problems were, and to verify that the complete installation is working correctly.  Highly recommended! 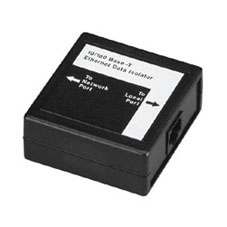 There's one other challenge to my networking here that I haven't mentioned before.  The cable modem and main router for my house are located in Debbie's second floor office, and powered from the house electrical power.  To get Internet in my shed, I've run CAT-6 all the way from that router out into the shed.  The challenge is that the ground wires on that Ethernet cable are using the house's power ground – and the shed (including the network equipment out there) is on its own ground (because it has a completely separate AC main, including it's own transformer and meter).

If you've ever done any utility-side electrical work, you can anticipate my challenge: it's the classic “ground loop” problem.  In my case, it's exacerbated by the fact that I have high current intermittent loads in the shed – things like a welder, 5 HP air compressor, etc.  If I tried to connect the house Ethernet to the shed Ethernet, I'm sure to have large transient ground loop currents between them – and quite likely fry some equipment!

The classic solution for this sort of problem is electrical isolation (between the house and shed, in my case).  I've never done this for Ethernet before (never needed to!), so I didn't know what was available.  It turns out that medical equipment with network connections routinely deals with this, and there are parts readily available.  I chose a Black Box SP426A “Ethernet Isolator”, pictured above left.  This is an optoelectronic device that's powered from the Ethernet line, very conveniently for me.  Mine should arrive tomorrow, and at that point I can actually install the router, switch, and wireless router in my shed...
Posted by Unknown at (permalink) 5:48 AM No comments: 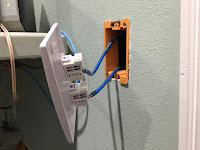 Paradise ponders...  Yesterday I spent a good part of the day in small and dark places :)  Some of it was in the attic, crawling around to locate the top of the wall (in Debbie's office) through which I wanted to run the network cables.  This was much more challenging than I had imagined it would be, for two reasons.

First, the wall in question isn't structural; it's just a dividing wall between two rooms.  That matters because that means there's no corresponding structure in the attic – in fact, nothing visible in the attic at all to indicate where that wall might be.  Precisely where it was actually matters a great deal, as I needed to drill a hole through the 2x4 at the top of that wall – and my target area for that hole was 3.5" wide by 8" long.  That's not a very big target!

Second, the attic is completely filled with blown-in insulation, right to the tops of the 2x12 joists.  That means that everything in the attic that might give me a visual cue (like wires, nails, etc.) is completely covered up with the insulation, rendering it invisible.

How could I find my drilling target?  The only way I could think of is to measure from the one reference point I had that was visible both on the second floor and in the attic: the little hole that I crawled up to the attic in.  That hole is about 12' east of the target wall, and about 2' south.  So I did some very careful measuring on the second floor, then went up into the attic and duplicated it.  That put me right between two joists (mounted north/south) and two big rectangular air ducts (going east/west).  I dug through the insulation, marked an “X”, and drilled – then went down to the second floor to see if I'd drilled a hole through the ceiling.  Nope!  Apparently I actually hit the target!  Yay!

At that point I cut a hole in the wallboard (photo above), “fished” the cable down toward the hole, and Debbie pulled it out.  Victory!

But we still had one more challenge.  One of the network cables was intended for a wireless router to be located in our kitchen.  The wall there that I wanted to run the cable through was just barely accessible from our mechanical room in the basement.  But, once again, I had no easy way to locate it.  This was actually a tad more difficult than the attic location problem, as this time there wasn't a nice convenient common reference point.  I ended up using the north and the east exterior walls as a reference.  The east wall was nearly 20' away, in a different room both on the first floor and in the basement – but even so, it was the best reference I had.  Once I located the place where I wanted the cable, I discovered that a huge steel air duct was blocking my access.  Dang it!  Then I had another idea: I could drill in from about a 45° angle, with a 20" long drill bit, and I could make it into the right area.  That was a little scary making that hole – if I was off by even a couple inches, I'd be drilling into either a (very) visible area, or into a kitchen cabinet.  Yikes!  But I drilled away, and the hole came out within a quarter inch of where I intended it.  Yay!

Shortly after that, I had everything wired up for the wireless router, and fired it up.  Oops.  It didn't work.  Out came the cable tester, and I soon discovered that one wire was broken.  The cable tester tells me where the problem is – and this time, it was in the female connector installed in the second floor wall (the photo above).  On inspection I found a broken wire.  All I needed to do was rewire it, and everything was working.  And now we have 5 bars of WiFi throughout our house, including in our bedroom.  Hooray!

Elray the well driller had a very successful day.  His attempts to develop the water layer at 321' were successful.  By the time he left yesterday afternoon he had almost completely cleaned out the area after having opened up the water bearing seams (with compressed air).  The result: 30 GPM of clear water, no detectable odors, at 54°F.  He's not going to be here today, but tomorrow he anticipates finishing the development work, pulling up the outer casing, and sealing the well.  Then on Saturday or Monday he'll be pulling his rig out.

The next stage for us will be to put in a low-capacity pump, wire it up (to the shed), run a water line to the shed, and then put some infrastructure in the shed.  I'm planning a 2,000 gallon cistern in there, with a float valve that controls the well pump.  That can be filled at a low rate – probably under 5 GPM – which will help keep pump costs down.  There will be a water softener and (if needed) iron removal system between the pump and the cistern.  Then after the cistern there will be a booster pump and pressure tank.  One potential variation on this scheme is to have a concrete cistern underground, outside the shed.  I need to check into the feasibility of that.  We have that setup for the spring that feed our house water, and it works well.
Posted by Unknown at (permalink) 4:14 AM No comments: