Erythronium revolutum...  Also known as the pink fawn-lily.  We've seen these growing in small meadows within a forest, in very dense groups.  At a distance they can look like small ponds nestled in the lowest part of a meadow.  Via BPOD, of course...
Posted by Unknown at (permalink) 11:26 AM No comments: 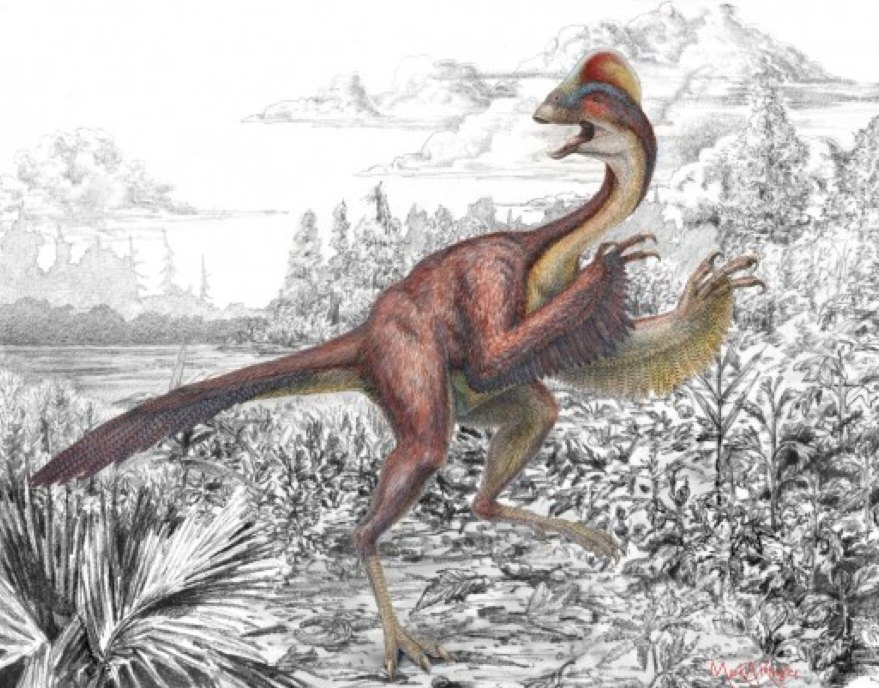 
Scientists have discovered a freakish, birdlike species of dinosaur — 11 feet long, 500 pounds, with a beak, no teeth, a bony crest atop its head, murderous claws, prize-fighter arms, spindly legs, a thin tail and feathers sprouting all over the place. Officially, it’s a member of a group of dinosaurs called oviraptorosaurs.

Unofficially, it’s the Chicken From Hell.

Wouldn't want to meet that thing in a dark alley!
Posted by Unknown at (permalink) 11:22 AM No comments:


Kevin Kelleher suggested an interesting way to compare programming languages: to describe each in terms of the problem it fixes. The surprising thing is how many, and how well, languages can be described this way.

Then he posts a bunch of examples. Here's just one:

Java: C++ is a kludge. And Microsoft is going to crush us.

Hah! And he's right – these make surprisingly good descriptions for quite a number of programming languages...
Posted by Unknown at (permalink) 11:18 AM No comments:

Russia and Estonia...  Longtime readers know that I have visited the little country of Estonia many times, and know it well.  So yesterday when I read this article, I was quite worried.  The gist of the article:


Russia signaled concern on Wednesday at Estonia's treatment of its large ethnic Russian minority, comparing language policy in the Baltic state with what it said was a call in Ukraine to prevent the use of Russian.

Russia has defended its annexation of Ukraine's Crimea peninsula by arguing it has the right to protect Russian-speakers outside its borders, so the reference to linguistic tensions in another former Soviet republic comes at a highly sensitive moment.

This prompted me to write an old friend in Estonia, to see what his take on the situation was.  He told me:


In short – yes, the majority of people are worried (polls say 70% or so) but that applies to Estonians. I am ashamed to say that many local Russians think that Putin does the right thing :(  What is the proportion of pro-Putin and anti-Putin local Russians nobody knows for sure and this understandingly just increases the anxiety among the Estonians. In Russia itself the support for Crimea annexation is overwhelming, even many Putin critics now support him. And that is I think one of the root causes for his actions -- earlier many people we're increasingly dissatisfied with his reign but now everyone who is unhappy about corruption or economy decline will be considered a traitor of the nation by the majority of the society. There is not even need for repressions for such protests (but rest assured we will see repressions anyway).

That doesn't sound good at all! He went on:


I'd say we are looking at something resembling Nazi Germany A.D. 1938. There is good news too, however -- unlike Germany, Russia is very ineffective and depends on outside world economically very much. For example, as much as 60% of beef and pork consumed are imports, majority of civil aircraft are Boeings and Airbuses, etc. Thus well targeted economic sanctions would quickly make Russians think again is Putin such a good ruler indeed. I would start with banning luxury cars and their spares export to Russia. The Russian officials may damn the West day in and day out but their rides are exclusively Mercedes, BMW and Audi. For them having to ride in anything else will be deeply humiliating :) And of course visa bans have to be widespread. I would cancel US and Schengen visas for everyone who works for the Russian govt. These people can be very patriotic in their speeches but are very used to their skiing vacations in the Alps, shopping tours to NYC and London, etc. Explaining to your wife why she will from now on only shop in extremely overpriced Moscow shops which often sell you Chinese replicas instead of originals is slightly more challenging than explaining to the masses why everything Western is evil :)

So if you want to help us and the Russians in Russia to get over it with the least possible damage, write to your congressman an demand swift and well targeted action. Trying to calm down a dictator with strong worded condemnations never works. If the Western democracies acted resolutely about Hitler's annexation of the Sudet region of Czechoslovakia in 1938 (also carried out to 'protect' the German minority), the WWII would probably not even started.

The Nazi comparisons he cites have been widely echoed.  His belief in the effectiveness of sanctions exceed mine – but here's one case where I sincerely hope that I am wrong, and that Obama wakes up from his Progressive reverie quickly and takes strong action on them.  I've already written my Senators (worthless weasels they are) and Congressman (a member of a more hopeful species).
Posted by Unknown at (permalink) 11:13 AM No comments:

Some day, I will be proud of my kitchen appliances.  But today is not that day...
Posted by Unknown at (permalink) 11:01 AM No comments:

Aurora borealis...  Via reader Simi L.  You'll want to make this one full screen...
Posted by Unknown at (permalink) 7:49 AM No comments: 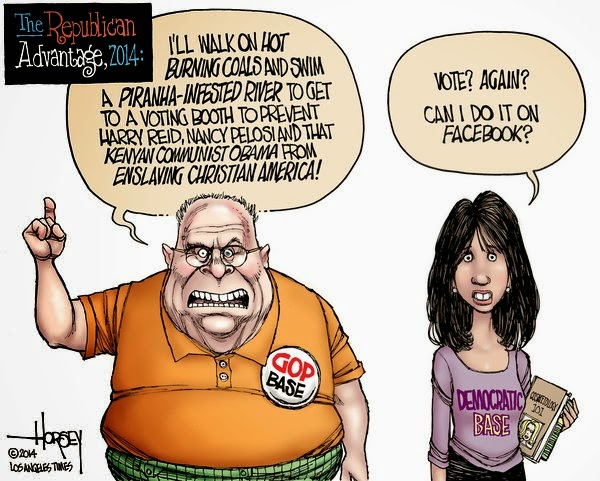 That isn't quite what you'd hear from me, but the attitude is certainly right: anything but a Democrat!
Posted by Unknown at (permalink) 7:47 AM No comments:

The Confession...  Via my lovely bride:


A man walked into a Washington D.C. Catholic Church Confessional.  He tells the priest: "Bless me, Father, for I have sinned. Last night, I killed a Congressman."

The Priest responds: "My son, I'm here to forgive your sins, not discuss your community service!"

Posted by Unknown at (permalink) 7:44 AM No comments:

“Science is the belief in the ignorance of experts.”

“Science is the belief in the ignorance of experts.”  So said my hero Richard Feynman, in a delicious quote I'd not heard before.  Now a group of scientists, including several Nobel laureates, have written a letter in which they invoked Feynman as an example of the kind of scientific maverick they'd like to see more of.

For some reason, climatology came right to mind – with a little fantasy of Richard Feynman meeting Michael Mann.  I'm pretty sure that only Feynman would leave that meeting with his ego intact :)
Posted by Unknown at (permalink) 7:36 AM No comments:

Quote of the day...  Goes to Mark Steyn, writing about his legal battle with Mr.-Aren't-I-Wonderful? Michael Mann:


After a year and a half ensnared by poisonous fecal tendrils in the unpumped toxic septic tank of DC "justice", I don't think "broken" quite covers it. To any non-American, this system is utterly repulsive. In England, trial by jury replaced trial by ordeal. Somehow America has managed to turn trial by jury into a mere postscript to trial by ordeal. I think it ought to be possible to litigate a 270-word blog post in under 270 weeks. So let's get on with it.

The wonderfully descriptive phrase “poisonous fecal tendrils” appears to be Mr. Steyn's unique invention.  Google found only four references to it just now, and all four are derived from Steyn's post...
Posted by Unknown at (permalink) 7:00 AM 1 comment: