Paradise ponders, 8' lumber, oven removal, and scallops edition...  Tomorrow we're supposed to get our new oven installed.  You may remember that we gave up on our old oven after three failed attempts to get it repaired.  The new one is a Bosch model that we're hoping we're just as happy with as we are with our Bosch dishwasher.  Also, it came highly recommended by our repair technician.

So this morning I tackled what I thought was likely to be an all-day job: removing the old oven and installing an electrical junction box.  The house's previous owner had done an awesomely shabby job of wiring the old oven: he just used wire nuts to join the wires, covering them with approximately eight miles of electrical tape.  It's the sort of electrical job you might imagine a child doing.  I ran into something similar when I replaced the microwave directly above this oven, and there I had room to install a standard outlet box.  The new oven is 220V, and those outlets are way too big to install in the cramped space the oven must fit in.  So I went with a hard-wired junction box.

Taking the oven out turned out to be relatively easy.  I had the old oven out in our garage just a half hour after starting.  With some creative use of our hand truck, it wasn't even all that difficult.  The hardest part was getting it onto the hand truck – wrangling 185 lbs of oven by myself was a bit of a challenge!  But I got it...

We made a run to Home Depot and got all the electrical parts I needed.  Installing them took all of another half hour.  So by 10 am I was completely done with that job.  Yay!

So we made another run to Home Depot, this time to buy the stuff I needed to build out a couple of frames around two of our basement windows in our cattery.  These are the windows that we've opened up to our sun room.  I removed the glass sliding windows, including their frame, and now we just have the steel frame that's set into the basement's concrete wall.  I'm building a frame out of cedar 1x8's with the boards perpendicular to the plane of the old window.  This is at the suggestion of our mason, who will use that frame as one edge of the rock he's installing. 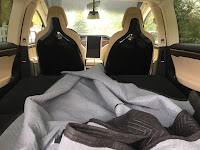 I needed to buy five 8' long pieces of cedar (1x8s), so I did some measuring to see if it would be possible to fit those in our Model X.  To my surprise, the answer was yes!  About six inches of the boards needed to extend over the center console, which I covered with a shipping pad to protect.  The photo at right I took while standing behind the open rear hatch.  You can see the “hole” between the two front seats where we stowed the boards, along with the pads I used to protect it.  We keep getting surprised by what we can carry in the Model X – it's really quite roomy inside (especially our five seat version with the rear seats folded down).

On the way to Home Depot, I stopped for a few groceries at Smith's.  That's not where we usually shop, so while I was in there I did a little scouting.  On the way by the seafood counter I spotted scallops – the great, big sea scallops that Debbie uses in her scrumptious baked scallops recipe.  I bought a pound and a half, and Debbie is cooking them as I write this.  Feast today!
Posted by Unknown at (permalink) 12:49 PM No comments: