“You've been to the chaparral!”  The smells of the chaparral have long been one of my favorite aspects of living in the middle of it.  Some summer mornings, the scents are glorious, wafting down from the hills above us.

Apparently I'm not the only person who enjoys this part of the chaparral.  The two guys in this video are at least as crazy as I am, and they love it to...
Posted by Unknown at (permalink) 2:35 PM No comments:

California, bringing on the doom as fast as it can.  Take a look at the thought processes of some selected USC students, as exemplified by the obliviots being interviewed in this video.  The interviewer asks just one or two questions of each.  First she wants to know if the student believes that Obama deserves the Nobel Peace Prize he received in 2008.  If the student replies affirmatively, she then asks “Why?”

These students are not just ignorant (a forgivable and repairable fault).  They give every appearance of being incapable of rational thought.  In a few cases, I'm not even certain they are of the same species I am.

I hear the doom approaching...
Posted by Unknown at (permalink) 2:28 PM No comments:

Shake, rattle, and roll!  At 1:10:43 pm yesterday, there was a magnitude 3.8 earthquake just north of Borrego Springs (at the blue dot on the map at right).  We felt nothing.  That's about 47 miles from our home, and the seismic waves from it got to our house about 12 seconds later (as you can see on the seismograph at right, from the USGS seismometer in our home).
Posted by Unknown at (permalink) 1:18 PM No comments:

Guess what I got today?  My mom sends me things:


I wanted to let you all know that earlier today I received my “Fiscal Cliff Survival Pack” from the White House.

It contained:
Everything was made in "China" and all directions were in Spanish.

Keep an eye out. Yours should be arriving soon.

Posted by Unknown at (permalink) 12:39 PM No comments:

They just don't understand windows...  About an hour ago, Debbie and I both heard a loud “boom”.  We both thought it was something like a small propane gas explosion, so we carefully looked at everything that uses gas in the house (heater, water heater, dryer, stove).  Nada.  Then just a few minutes ago, Debbie spotted a dead juvenile California quail, lying on the ground just outside our laundry room window.  It must have been what made that noise, by flying into that window.  I went out, made certain it was actually gone (its neck was obviously broken), and then buried it.

We hate these window strikes, which are distressingly common on our south-facing windows.  The fact that it was one of our more beautiful local birds just made it that much worse...

Update: an anonymous commenter pointed me to this Science News article about scientists studying the problem of window strikes.  I just read this a couple days ago (in the paper version), and had no idea it was online...
Posted by Unknown at (permalink) 11:54 AM 1 comment:

Cheating traders and c.  Here's a fascinating story straight out of the world of electronic trading (stocks, bonds, options) that I used to work in.  The starting point is the suspicion that certain traders in Chicago had knowledge of the recent Fed's decision to not start tapering down their monthly “quantitative easing” (aka wantonly spending our money).  The proof comes from c: the standard symbol for the speed of light.  The Chicago traders were making trades obviously based on knowledge of the Fed's decision before they should have known about it.  We're talking about milliseconds (thousandths of a second) here, but in the world of electronic trading, that can be worth billions of dollars.  The Fed's decision was published in Washington, D.C., and that information should have taken about 7 milliseconds to get to Chicago.  But the Chicago traders were acting on that information just 2 milliseconds after publication.  Light doesn't travel that quickly – so the inescapable conclusion is that (a) the Chicago traders knew about the Fed's decision ahead of time, and (b) they acted on it in a way designed to hide their prior knowledge (by waiting until the publication time to act on it).  But they forgot to include the speed of light in their calculations...
Posted by Unknown at (permalink) 7:57 AM No comments: 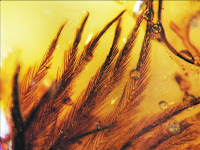 Dinosaur feathers in amber.  Scientists looking for unambiguous evidence that at least some dinosaurs had feathers found exactly what they were looking for.  They found other interesting things, too.

For most of my life scientists thought that dinosaurs and birds had very different lineages.  The discovery that birds actually are dinosaurs that survived the extinction events is relatively recent, and turns all our notions of what dinosaurs looked like – and probably how the behaved, how smart they were, and much more – completely upside-down.  The hard work and series of discoveries that went into that new understanding is a truly marvelous example of good science.  Those scientists didn't figure this out by building computer models that magically showed birds were dinosaurs.  It was good old-fashioned scientific observation, theory formation, and confirmation – repeatably – that got them there.

Climate scientists: please take note.
Posted by Unknown at (permalink) 7:47 AM No comments:

He's a putz.  That's my takeaway from Peggy Noonan's interview with Howard Schultz (CEO of Starbucks), talking about his recent decision to ask Starbucks' patrons to refrain from bring guns into his stores...
Posted by Unknown at (permalink) 7:40 AM No comments:

The Obamacare “exemption” for Congress, explained in the Wall Street Journal.  The comments are just as interesting as the article.  It's ironic that Congress panics (and cuts themselves a special deal) at the effect Obamacare has on their own staffs, but seems to have trouble understanding why it's a problem for business.

Not that anybody will listen to me, but I think the only solution to this mess is the following five-step plan:
But like I said, nobody is listening to me :)
Posted by Unknown at (permalink) 7:36 AM No comments:

California leads the way... in vile politicos.  First there's this series of tweets, from Allan Brauer (at right), who is the communications chair for the Democratic Party of Sacremento, California to Amanda Carpenter, an aide to Republican Senator Ted Cruz:


May your children all die from debilitating, painful and incurable diseases.

Busy blocking the tapeworms that have slithered out of hellspawn @amandacarpenter's asshole. How's your day so far?

I'm being attacked on Twitter for wishing one of Ted Cruz's pubic lice to experience the pain her boss is inflicting on Americans.

Well, I guess we all know how he feels about civil intercourse.

Now mind you, I fully support Brauer's right to say these things, vile as they are.  This is America, and the First Amendment is still in force (for now, anyway).  But that doesn't mean there shouldn't be consequences for this speech.  Given his position as communications chair (!) in the Democratic Party, of course what he said will be interpreted as (at the very least) being condoned by the Democratic Party – something you'd think they'd not appreciate.  The appropriate thing for them to do would be to fire his sorry ass, posthaste.  So far, at least, that isn't happening.  Instead, the company he works for is saying “Case closed, because he's apologized.”


The problem with this kind of rhetoric is that it lets fringe characters—those who are actively trying to shut down the government—like Ted Cruz, off the hook. It’s never acceptable to wish physical harm against political opponents, regardless of how objectionable their policy priorities are.

Really, Tenoch?  That's the problem with what Bauer said?  Not the crudeness, the vulgarity, the incivility?  They're not a problem at all?

Many have said this before, but it's worth keeping in mind: when politics works the way it is illustrated above – and there's a lot of this sort of low dealing – the only people who even consider running for public office are those that are so motivated by the power (or perks of corruption) that they're willing to overlook the nastiness.  I can think of quite a few people I've met in my life who would make far better elected officials than the ones we have.  I can't think of a single one who would even consider running...
Posted by Unknown at (permalink) 7:11 AM No comments: 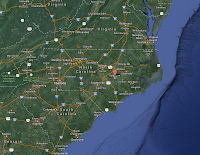 Let's hope the systems today are more reliable... because I have no doubt the bureaucrats today are at least as bad.  In early 1961, an accident came disturbingly close to detonating a 4 megaton H-bomb over North Carolina.  The key finding was that a short circuit in just one safety device (a completely plausible possibility in the accident scenario) would have caused the bomb to detonate.  This was disclosed in a newly released document, which contradicts all prior public statements by the Air Force and Department of Defense – and confirms contemporaneous speculation.  I remember reading this speculation in the late '60s.  The Guardian (a U.K. newspaper) obtained the document under the Freedom of Information Act.
Posted by Unknown at (permalink) 6:53 AM No comments:

“Don't mess with our drones!”  That's the message the U.S. Air Force sent Iran earlier this year...
Posted by Unknown at (permalink) 6:40 AM No comments:

Confused by all the crazy things you're hearing about the continuing resolution?  Try reading this.  It helped me understand, in particular, what Ted Cruz is trying to do...
Posted by Unknown at (permalink) 6:39 AM No comments:

The world just isn't simple, no matter how badly we want it to be...  Megan McArdle has an interesting piece on the decline of labor income and free trade.  My takeaway: free trade may be the worst thing that ever happened to the value of work, except for all the other approaches to trade...
Posted by Unknown at (permalink) 6:37 AM No comments: Oort clouds and evolution, oh my! Robert Zimmerman writes on his blog about a new paper in pre-print that links mass extinctions events on Earth with the Solar System's movement through the Milky Way galaxy's “arms” (the red path on their diagram at right shows the Solar System's path through the black arms of the galaxy).  The gist of their notion is that by moving through the relatively dense star population in the galaxy's arms, the Oort cloud of proto-comets is disturbed – and more of them come raining down into the inner Solar System.  Some of those strike the Earth, causing all sorts of havoc – and accelerating the rate of evolution.  Thinking about other things I've read recently, such a high rate of comet impact might also have “seeded” the early Earth with chemicals that aided life's development.
Posted by Unknown at (permalink) 6:33 AM No comments:

Fly like an eagle...  You'll want full screen mode for this one...

In the geeky argument department: There has been a big (if obscure) debate about leap-seconds for several years now.  Most people don't even know about leap-seconds, but they are actually a pretty simple idea: they compensate for variations in the length of the day, which is unsteadily and very slowly getting longer.  The lengthening is mainly the result of tidal forces on the Earth's oceans, and to a lesser extent, its molten core.  If these changes were precisely predictable, there wouldn't be any debate – we'd simply make rules (like the rules for leap-years) and everybody's clocks would take those rules into account.  But these variations are not predictable, so there's no way to bake any rules into the clocks – and that's the basis for the debate.  Basically, some people think that leap-seconds are worth all the trouble they cause in high-tech systems, and some people think they're not.  The two camps have been trying to reconcile their differences for almost 10 years now, and recently they decided to kick the can down the road for another two years.
Posted by Unknown at (permalink) 6:22 AM No comments: