Thankfully they are on sale this week and I shall purchase another 12 boxes...and so my life goes on and on and on...

Anyone who knows my Dad knows about his obsession with planning his next meals. We all speculate this is derived from his Great Depression-era childhood. Whatever the cause, he spends a significant part of his life thinking about where the next meal is going to come from. For example, anytime he and I went on a trip together, the moment we got underway in the car you could be sure that the next thing he'd say would something like “So...where are we going to eat lunch?”

So my mom's story seems completely in character, especially if you know about his chocolate ice cream fetish. I can easily imagine how is brain reacted upon seeing a mere 2 boxes of chocolate ice cream remaining: “Oh, noz! What am I going to eat for lunch?!?!”
Posted by Unknown at (permalink) 4:46 AM No comments: 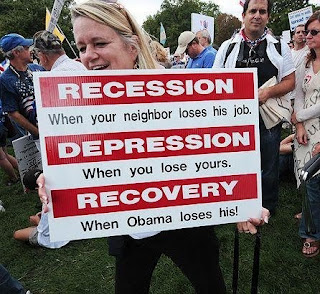 Let's hope the voters in November 2012 see things as clearly as this demonstrator does!

Your Tax Dollars at Work...

The Deepwater Horizon well has been belching great gobs of oil into the Gulf of Mexico for months now.  Our federal government has been spending millions of dollars, hard at work on mitigating the damage and finding a cure.

Or at least, that's what Obama would have you believe.  The reality is just a bit different.  Just this morning comes the news that finally the federal government has decided to allow foreign nations to help us out.  That would be those foreign nations that own more than 90% of the world's oil spill cleanup equipment, and who have been clamoring to help since the day the well blew up.  Stories like this one have been in the press for months now.

Isn't it comforting to know that the government showing such speedy, sensible response is the same one who's going to be taking care of you if you have a medical emergency?
Posted by Unknown at (permalink) 4:33 AM No comments:


And you can't build an empire on dicks.

What's Knuth going to announce?
Posted by Unknown at (permalink) 4:24 AM No comments: