Posted by Unknown at (permalink) 2:54 PM No comments:

Of puppies and eagles... 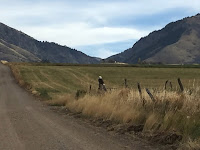 Of puppies and eagles...  Right around noon today I took Cabo and Mako (our field spaniel puppies) out for their daily walk.  We took our usual route up into the hills just east of our home.  As we crested the first little bump, I spotted a bald eagle resting on a fence post just ahead of us (center of the iPhone snap at right).  The puppies were so busy rooting around at ground level that they didn't spot it.  We got to within about 50' before the eagle, spooked, took off.  I had switched to video shortly before that; you can watch it below.  The puppies spotted the eagle about a nanosecond after it left the fence post, and they practically pulled my arm out in their efforts to chase it.

One of my first jobs ... in the tech world was for a company named Xscribe.  That job really stands out in my mind, as I was able to get it despite my utter lack of credentials (no degree related to either electrical engineering or software engineering).  I got it by making a deal with the engineering boss, a fellow named Mal Cox, one that I promised not to tell the other employees about: I agree to work for free for up to 90 days.  The idea was to prove myself in a hands-on way, at no risk to the company.  The handshake agreement we had was that if and when Mal decided he'd like to have me as an employee, he'd offer me an actual job, with pay and everything. :)  It took him about three weeks to make me an offer that just bowled me over, as it was for so much more money than I'd ever made before.

Anyway, Xscribe was in the business of computerized stenography.  At the time, stenography was mainly used for court reporting, medical records transcription (from recordings), and the rapidly growing field of live-captioning television.  Their computerized product greatly eased the burden of the court report (their typical customer) in producing the formal official transcripts of court proceedings.  It was an interesting market, and an interesting product – though the company was deeply invested in proprietary hardware, which the advent of the IBM PC directly threatened.

This morning I read that there's now an active open source community trying to create free open source software and low cost open source hardware for the same purpose.  Stenography has an even broader set of users these days, and the hardware really should be easy to make at low cost – the most exotic requirement is for quality switches with the right feel.  I don't really have a personal interest in any of this, but it was interesting to see that early field I was in coming full circle to an open source project...
Posted by Unknown at (permalink) 8:50 AM No comments:

This morning I opened up a file folder I hadn't examined before, and found about 25 large-format original photos.  Some of these I've posted before, from copies (and usually much smaller) – and these usually had new annotations as well.

On the back my mom wrote: “Mom at camp 1952”.  That's her mom, my grandmother Mable MacLaughlin.  She's standing on the stair landing, just outside the screened porch of my family's “camp” on Long Pond, just north of Lincoln, Maine.  That camp is gone now, and my brother Mark is building a new one.   That porch stood on pilings that moved nearly every winter; the whole camp was perennially out of kilter.  We really didn't care, so long as it didn't slide into the lake (which it never did, though there were a couple of close calls).  My grandmother is facing Long Pond; there were wonderful views of it from that porch.  The photographer must have been standing on the plank walkway that led to a floating dock, just a few steps away.  So many wonderful memories of that place! 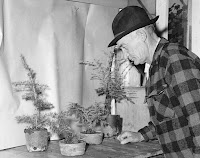 This is my mom's dad, my grandfather Donald MacLaughlin.  The back of the photo is stamped “ASBURY PARK PRESS PHOTO Asbury Park, N. J.”.  My grandfather was an active bonsai artist, so I'm guessing this was from press coverage of one of the contests or exhibitions he entered.  He's wearing the heavy plaid shirt and felt cap that I remember so well.  From his appearance, I'd guess this was taken in the mid-'50s.  I remember him looking exactly like this, when I was small.  Two of those bonsai are in the traditional Japanese low clay pots, something I saw bazillions of in Japanese arboreta.  I don't know what the venue was here. 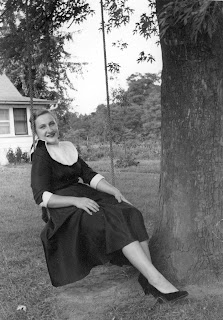 I've posted a smaller version of this one before (this original was 5x7).  On the back, in my mom's handwriting: “Me Age 18”.  This was taken in 1951, then, just before she and my dad were married (when she was 19).  She's on a swing I remember well, at my grandparent's house.

On the back my mom wrote: “Dad in his nursery”.  That's her dad, my grandfather, standing up holding a spade and a cigarette.  I don't know who the other two men are, but most likely they were hired hands.  I recognize the field and the building in the background; his greenhouse was to the left of that building.  He looks younger than my memories of him, and I see a car from the '40s in the background, so I'm guessing this was taken circa the late '40s, likely post-war.  The nursery business was practically dead during the war, as you might imagine.  The photographer has his or her finger on the lens – something my mom was particularly good at with the old Brownie-style box cameras.  Therefore I'll say there's a good chance that she took this photo. :) 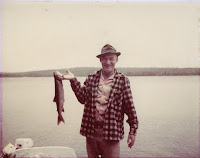 Oh, I remember this photo so well!  It (or a copy of it) used to hang in the camp in Maine, and a framed version stood on my mom's dresser in our home in Robbinsville, New Jersey.  That's my mom's dad, my grandfather, Donald MacLaughlin.  I don't know when this was taken, but I'll guess the early '50s from his appearance.  That's Long Pond he's one, and the fish he's holding up is pretty big for there.  He's wearing his characteristic plaid shirt and his felt fishing cap.  Such a happy expression on that beautiful face, and that's exactly how I remember him – as a very happy man. 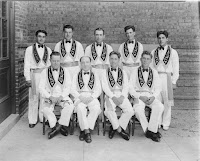 Finally, here's a photo I posted a small version of earlier.  This original is an 8x10 and in great shape.  On the back, in my mom's writing: “Dad in Masons - bottom row right end - He was 32 degree Mason - How handsome!”  I'd have guessed that was my uncle Donnie, but instead it's a younger version of his father, my grandfather, Donald MacLaughlin.  There's some information about 32nd degree Masons here (“Sublime Prince of the Royal Secret” – what the heck is that?), though it doesn't help me very much. :)  I'll guess this was taken circa '30.  I still have no idea what those scarves mean, or why they have different letters and numbers on them...
Posted by Unknown at (permalink) 6:56 AM No comments:

A tale of excellent customer service...

A tale of excellent customer service...  About a year ago, Debbie and I upgraded from our old iPhone 5 to brand-new iPhone 6s+.  We made the decision – not too bright, in hindsight – to carry them around without protective covers.  Mainly this was because our new phones are huge by comparison with our old ones.  This is great for our aging eyeballs, but makes them a tad challenging to carry around with us.  The protective cover would have added significantly to the already-bulky phones.  We did decide to buy AppleCare for our phones, eying its insurance (for loss or damage) as a safety net.

We love our new iPhones.  They're terrific machines.  But, perhaps predictably, we both managed to break our screens – and within a week of each other, too.  Debbie's phone had some cosmetic damage to the aluminum case, but the damage on mine seemed to be restricted to the glass screen.

We don't have an Apple store anywhere near us, but there is an authorized dealer in Logan, a company called Expercom.  About ten days ago I took Debbie's phone in there, on a Thursday.  The nice folks there helped me through the process of sending it for repair.  It was actually quite painless.  We had the option of getting a loaner phone, free, but they didn't have any in stock.  So I opted to send it in without the loaner, and then Apple would FedEx the repaired phone directly to our house to save time.  The Expercom folks told me to expect the repaired phone the following Tuesday or Wednesday.

Well, that's not quite what happened.

On Monday morning, around 9:30 am, FedEx showed up with a box from Apple.  Inside was a brand new phone, not the broken one we sent in.  A little note explained that the damage to her phone was such that a replacement was necessary.  Given that her phone was working fine, I think that can't possibly be true – they must be routinely replacing busted phones.  Also, given the speed with which she received the replacement, it must have been sent before Apple even received her broken phone.

So to summarize, because we had AppleCare:
1.  The total cost of fixing the phone was $29.99.
2.  The turnaround time was two business days, including shipping
3.  The phone was replaced with a new one, not repaired.

I can find absolutely nothing to criticize in that response!  I turned my phone in for repair yesterday. :)  This time they had a loaner available, so that's what I'm carrying around now.  The loaner was crazy easy to configure: I just restored a backup, entered my cloud password, and poof! – my phone was back!
Posted by Unknown at (permalink) 5:23 AM No comments:

I voted this morning (by mail) ... and not the way I expected to.  If you're unfortunate (and crazy enough) to be a long-time reader of this blog, then you know that I have uncharacteristically “sat out” this presidential election cycle.  The reason is simple: neither of the leading candidates (Clinton or Trump) is a person I'd support for rest stop toilet cleaner, much less president of this country.  I dismissed the other candidates as a waste of time, with zero chance of winning the election.  My plan was to simply not vote for any candidate for president.

Then a few days ago I read this article.  It's a fascinating romp through U.S. presidential election arcana – and it outlines an unlikely, but possible, way that a conservative candidate named Evan McMullin could win.

Wait, what!?!?  Someone other than Clinton or Trump could win this?  I'm in!

Now I know next to nothing about McMullin, and I am not endorsing him.  My vote for him is based almost entirely on two things: (1) there's a slim, but non-zero chance that he win the election instead of Trump or Clinton, and (2) he's a conservative Mormon Utahan.  That's enough for me in this cycle!

On the rest of the offices and issues, all but one were slam-dunks for me.   I voted for the most conservative candidate in each race (as there were no non-nutcase Libertarians running).  The proposed state Constitutional amendments were all easy to support; minor, common-sense changes.  The one challenging choice for me was Proposition #11, which would form a Cache County Water District.  That's a vote for more government, something I would usually instantly oppose. :)  In this case I am reluctantly voting for the district, mainly in self-interest: to protect water in Cache County from being poached by the Salt Lake City metropolitan area, which is growing very fast and is already a huge water sink...
Posted by Unknown at (permalink) 3:20 AM No comments: