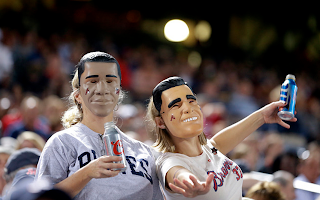 ...in the crucial Halloween mask race.  Via reader Simon M.
Posted by Unknown at (permalink) 6:06 AM No comments:

A great collection of paraprosdokians (a favorite form of humor of Winston Churchill and Groucho Marx), via my mom:

2. The last thing I want to do is hurt you. But it's still on my list.

3. Since light travels faster than sound, some people appear bright until you hear them speak.

5. We never really grow up, we only learn how to act in public.

6. War does not determine who is right - only who is left.

7. Knowledge is knowing a tomato is a fruit.. Wisdom is not putting it in a fruit salad.

8. To steal ideas from one person is plagiarism. To steal from many is research.

9. I didn't say it was your fault, I said I was blaming you.

10. In filling out an application, where it says, 'In case of emergency, Notify:' I put 'DOCTOR'.

11. Women will never be equal to men until they can walk down the street with a bald head and a beer gut, and still think they are sexy.

14. To be sure of hitting the target, shoot first, and call whatever you hit the target.

15. Going to church doesn't make you a Christian any more than standing in a garage makes you a car.

16. You're never too old to learn something stupid.

17. I'm supposed to respect my elders, but it’s getting harder and harder for me to find one now.

18. You're nobody's fool ... but perhaps someone will adopt you.

19. Behind every successful man stands an astonishing mother-in-law.


Ever walk into a room with some purpose in mind, only to completely forget what that purpose was? Turns out, doors themselves are to blame for these strange memory lapses. Psychologists at the University of Notre Dame have discovered that passing through a doorway triggers what's known as an event boundary in the mind, separating one set of
thoughts and memories from the next. Your brain files away the thoughts you had in the previous room and prepares a blank slate for the new locale."

It's not aging, it's the door! Whew! Thank goodness for studies!

Posted by Unknown at (permalink) 5:56 AM No comments:

Reader Doug S. passes along this story of the unexpectedly warm temperatures Curiosity is finding on the surface of Mars...
Posted by Unknown at (permalink) 5:50 AM No comments:

Geologist want to drill a hole all the way through the Earth's crust and take samples of the molten mantle.  This is far more difficult than most people realize, as this analogy hints at:


It will be the equivalent of dangling a steel string the width of a human hair in the deep end of a swimming pool and inserting it into a thimble 1/10 mm wide on the bottom, and then drilling a few meters into the foundations.

A tenth of a millimeter is roughly 1/250th of an inch. The drill “bits” used to drill through the very hard rock above the mantle only last for about 50 hours of drilling.  After each bit is worn out, the entire “string” of steel rod, miles long, has to be extracted, the working end brought to the surface, the bit replaced, and the entire thing re-inserted in the 30cm (roughly one foot) diameter hole in the sea floor.  To do this just once is an amazing feat.  To get to the mantle, they'll have to do it many dozens of times...
Posted by Unknown at (permalink) 5:48 AM No comments:

Night of the Living Pelosi...

John Dennis is a Republican candidate for the House of Representatives, running against California's shame: Nancy Pelosi.  Even more shameful than the fact that California has elected Pelosi in the past is that near-certainty that we will re-elect her again this year.  John Dennis has no real chance of winning in Pelosi's overwhelmingly leftist district – a district that includes a significant number of registered Communist and Socialist voters.

Dennis is running his campaign on a shoestring, as every potential contributor knows he has no chance of winning.  The campaign recently released this ad: Night of the Living Pelosi, which is definitely the kind of thing you're only likely to find in a place like modern California...

Why Are People Surprised By This?

Last evening, the Daily Caller released the video below of Barack Obama addressing a mostly-black audience in 2007.  In the video he lavishly praises the Reverend Jeremiah Wright, and speaks with a recognizably “black”accent (still with the rest of his superb speaking voice, including his trademark calmness, authority, and tonality).  The reaction of most pundits seems to be surprise, but I can't figure out why.

In the campaign of 2008 (less than a year after this speech), he very publicly denounced Jeremiah Wright and quit attending Trinity church, as Wright's radical leftist views were obviously not going to help Obama get elected.  At the time, that seemed like a rather obvious hypocritical move designed to help Obama's image.

I don't think it's surprising at all that Obama would have a very different message for an audience that was likely to think quite highly of the radical Reverend Wright.  Nor do I find it surprising that Obama adopted the accent of his heritage when speaking to that same group.  Both of these behaviors are standard fare for any politician, though most wouldn't be able to pull them off as smoothly as Obama did.  You have to give him credit for the skills he has as a politician, even if you don't like the man.

I think all that's really going on here is in the Internet age these time-honored behaviors of politicians are much more likely to be revealed.  In an era when practically everyone carries a video camera on their person (in their phone), and when anybody can post a video to YouTube for all to see, it's nearly impossible for any politician to keep such shenanigans confidential.

The speech is instructive to watch for at least one reason: it transforms into absolute certainty our suspicion of Obama's hypocrisy in denouncing Reverend Wright in 2008...