Mark Steyn on Brown vs. Coakley...


Remember the good old days when the glossy magazine covers competed for the most worshipful image of the new global colossus? If you were at the Hopeychange inaugural ball on Jan. 20, 2009, when Barney Frank dived into the mosh pit, and you chanced to be underneath when he landed, and you've spent the past year in a coma, until suddenly coming to in time for the poll showing some unexotically monikered nobody called Scott Brown, whose only glossy magazine appearance was a Cosmopolitan pictorial 30 years ago (true), four points ahead in Kennedy country, you must surely wonder if you've woken up in an alternative universe. The last thing you remember before Barney came flying down is Harry Reid waltzing you round the floor while murmuring sweet nothings about America being ready for a light-skinned brown man with no trace of a Negro dialect. And now you're in some dystopian nightmare where Massachusetts is ready for a nude-skinned Brown man with no trace of a Kennedy dialect.

How can this be happening?

You don't need to have been in an actual coma. Subscribing to The Boston Globe, the unreadable and increasingly unread Massachusetts snooze-sheet, has much the same effect.


Go read the whole thing.  But put down your morning beverage first...
Posted by Unknown at (permalink) 8:18 AM No comments:

What a Crazy World We Live In...

The socialist paradise known as the People's Republic of North Korea is taking lessons on how to implement capitalism:


Perhaps as part of that plan, South Korea is sponsoring economics training courses in China, for senior North Korean officials. The training brings the North Koreans up to speed on how a market economy, and capitalism, really work. South Korea is used as an example, and most North Koreans now know, or suspect, that the situation is much different (and much better) in the south. It's believed that North Korea wants to get a guarantee, of non-interference, from the United States and South Korea, before it embarks on a program of economic reform. North Korea believes these reforms could cause unrest in the north, and doesn't want the U.S. or South Korea taking advantage of that. Actually, the minor economic reforms (farmers markets and such) over the last seven years has caused growing unrest. China is urging North Korea to get on with the economic reforms, like China did in the 1970s and 80s, and become self-sufficient. China does not want the two Koreas united (since the new Korea would likely be a democracy), but does not want to keep propping up a Stalinist dictatorship in the north.

What the hell is wrong with us, people?
Posted by Unknown at (permalink) 8:12 AM 1 comment: 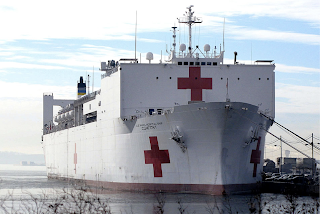 To most people's eyes, this is one ugly ship.

But I'll bet it looks absolutely beautiful to the Haitians when it arrives this coming Thursday.  It's on the way right now.

It's the USNS Comfort, a hospital ship with 250 beds and 550 medical personnel.

America is quietly providing real assistance, as it always does.  We already have a substantial presence on the ground there, far larger than all other countries and the U.N. taken together.  This is not to denigrate their efforts, but rather to make a point: the world depends on America's ability to project resources quickly, whether those resources are military, medical, financial, or logistical.  Private American citizens give more to foreign causes, per capita, than the citizens of any other country.  For the past 20 years, America's ability in these areas is more effective than the rest of the world combined, and that shows no signs of changing.  The rest of the world depends on us to provide (and pay for) these things.

As an American, I'm proud of these facts.  I wish we got a little more credit for them from our foriegn critics...
Posted by Unknown at (permalink) 8:07 AM No comments:

Only in the Politically-Correct, Bizzaro World of Public Schools...

...could a student (and his parents!) be told to get counseling because of a science fair project.

It seems that the student had an idea for how to make a motion detector, and he decided to use that idea for a science fair project.  He came up with a design that involved an empty Gatorade bottle and some electronics.  He brought his project to school to show some friends.

That all sounds great to me: an interested and engaged student, working on a science project.  What could be wrong with that?

Here's what: the school's vice-principal took one look at the kid's science fair project and decided it might be a bomb.  He called the police.  They put the school into lockdown.  They sent in a robot to examine the project – and concluded it was just what the kid said it was, a harmless science fair project.  For some reason, they also decided to search the kid's home – and they found nothing at all.

At this point, my conclusion would be that we need to publicly horse-whip the stupid SOB vice-principal.  Following that, we should fire all the vice-principals as useless, expensive, and unnecessary bureaucracy that contributes absolutely nothing to the education of our country's youth.

Do you think that's what they did?

Nope.  The vice-principal is still employed, along with all the other vice-principals, and there will be no public flogging.  Nor any private admonition.  In fact, all indications are that the school system entirely supports the vice-principal's actions.

Worse, the school “authorities” have told the kid and his parents to get counseling, and they've stated that the kid violated school policies.

So now we've got a kid (and his family) who have been taught an important lesson by our public school system: never, ever display the slightest curiousity or enthusiasm for anything that wasn't directly ordered by the “authorities”.  March in lockstep, little ones – both now and in your adult future.

I don't have any children, and won't have.  But if I did, I would do anything to avoid placing them in our awful public schools...

And I'm ashamed to say that this event happened on Friday right here in San Diego.
Posted by Unknown at (permalink) 7:55 AM No comments:

It seems like every time I have the slightest optimistic twinge for the future of the human race, this person pops back into the news.  I'd call her a moron, but that would be insulting to most morons.  I need a new word...
Posted by Unknown at (permalink) 7:40 AM No comments: