Yes, I am aware...  This is in reply to the (male!) reader who shall remain anonymous: yes, I am aware that the Day-by-Day cartoon I feature on the right occasionally has some depictions of nude women.  I happen to like naked women!  I wish they were featured more often :)  No, I will not remove it from my blog to protect your delicate (and, dare I say, somewhat warped) sensibilities.  If you don't like it, then don't visit here.
Posted by Unknown at (permalink) 8:44 AM No comments:

Physical therapy ... kicked Debbie out this morning!  It's all good, though: they said she no longer needs to go.  She can do all she needs at home.  We go back in two weeks for a checkup, but basically ... she's done!

With that, we will declare her surgery (just two weeks ago today!) a complete success...
Posted by Unknown at (permalink) 8:39 AM No comments:

Scharrkreise...  Beautiful image at right of a perfect circle made by a plant, some wind, and some sand.  I've seen many similar circles made by desert lilies in the desert east of San Diego, but I never managed to capture it quite so perfectly as this photographer did...
Posted by Unknown at (permalink) 8:37 AM No comments:

Paradise ponders...  I made a run to the grocery store yesterday, to pick up the ingredients for Debbie's chicken-mushroom soup (which I will be enjoying later this morning!).  On the way back from the grocery store, in a light drizzle, I was on a stretch of the highway with two lanes in each direction.  Passing through an area where the speed limit was 45 MPH, a pickup and I were traveling side-by-side, with me in the left lane.  Behind me a little car zoomed up to within a few feet of my rear bumper, and next thing I know it's honking at me, flashing its lights, and the driver (a middle-aged woman) was waving at me angrily.

Now that's the sort of thing one routinely sees on the highways of southern California, but not up here in northern Utah!  I was quite shocked, actually, as that sort of behavior is just not seen here.  Maybe 10 seconds after she approached my bumper, the truck on my right turned off the highway, and right away the lady behind me jerked to the right lane, zipped up right next to me, and rolled down her window – in the drizzle, mind you!  I looked over to see a foaming-at-the-mouth angry woman, flipping me the bird, and yelling something that I couldn't (thankfully!) hear.  Then she took off.

I was pondering the outrageousness of this behavior when I saw a police car behind me light off his flashy lights.  He zoomed by me on the right, and pulled over Ms. Outraged.  I pulled over right behind him, thinking I might be able to help somehow.  The cop got out of his car, waved at me in a friendly way, and walked up to her car.  After speaking with her for a minute, he came back to my truck and we had a nice conversation.  It turns out that Ms. Outraged is named Marsha, and she's well-known to the local cops.  She's had two previous incidents of aggressive driving and distracted driving; this would make the third – and the one that would cost her her license.  The cop asked me if I'd be willing to testify if she asked for a jury trial, and of course I said yes.  He took my contact info and a brief statement, then sent me on my way.  With a smile.  I can't imagine that ever happening in southern California!

Yesterday evening, Debbie and I watched The Martian on DVD.  I'd already read the book (which I loved!), but Debbie had not.  The movie did quite a good job of following the book, right up until the very last scene in space where the filmmaker took some liberties with the plot line.  Compared with most movies made from books, this was a small divergence.  As always, though, the book had far more detail than the movie could possibly cram in.  I enjoyed the movie, probably most especially the scenery.  I'm assuming that's all computer-generated, but it's still quite beautiful – even though it doesn't really match the photos I've seen of the Martian surface :)
Posted by Unknown at (permalink) 6:00 AM 3 comments:

Space flowers...  The first flowers grown in space, some orange zinnias.  This was part of an experiment on the ISS designed to learn how to grow things in space.  I like the flower, but I hate the waste taxpayer dollars being spent on the ISS – most especially on the purposeless pursuit of manned space missions (which this experiment is part of)...
Posted by Unknown at (permalink) 5:43 AM No comments:

Still beautiful after all these months... Still beautiful after all these months...  Comet 67P, imaged by the Rosetta robotic explorer...
Posted by Unknown at (permalink) 5:37 AM No comments:

I'm not surprised by this:

I'm not surprised by this: a new study casts doubt on the notion that smoking marijuana reduces cognitive function.  My lack of surprise isn't from personal experience, but rather from observation: a significant percentage (probably over half of those under 40) of the talented programmers I've worked with were regular marijuana users.  I saw no observable impact on their performance...
Posted by Unknown at (permalink) 5:35 AM No comments:

Curiosity and the dark dune of Mars... Curiosity and the dark dune of Mars...  Curiosity has been studying some dark dunes on Mars for several weeks now.  The photo at right shows the main object of its study.  Go, Curiosity!  Via APOD, of course.   Full resolution photo here. And speaking of Curiosity ... check out the recent photo it took (with the mast camera) at left.  The photo shows a soil analysis system mounted on Curiosity's deck.  The interesting thing to me here is all the accumulated dust.  Curiosity needs a good windstorm to blow all that crap off!
Posted by Unknown at (permalink) 5:29 AM No comments:

Synchronization and syntonization...  It's amazingly difficult for a computer to keep very precise time.  Anything more accurate than within a second or two of accepted standards is a major challenge.

I first ran into this when working for an electronic trading company, where we were required (by regulatory agencies) to keep our logs accurate to sub-second levels.  When I was given responsibility for the IT organization, one of the first things the team hit me with was that we were out of compliance with the regulations.  In fact, our servers weren't even able to stay with 10 seconds of the “correct” time!  Fixing that problem took months of very hard work by several people on the team, mainly to make sure we had no delays (from network gear, mostly) between our logging servers and their time source. We also had to buy $20,000 worth of special “Stratum 1” NTP servers that were synced to atomic clocks on GPS satellites.

It's gotten a little cheaper these days, but not really any easier...
Posted by Unknown at (permalink) 5:27 AM No comments:

A winner like ME!  My pistol-packing mama passed along this appearance by Donald Trump on the Jimmy Kimmel show.  It includes a segment (starting at around the 3:00 mark) that's pretty funny at first blush ... but then I got to thinking what it would be like to have a President Trump who would embody what's being spoofed here.  That's not a particularly pleasant or humorless thought.

Estonia looks better all the time, if only it didn't have Pesky Putin with a gun at its side...
Posted by Unknown at (permalink) 5:02 AM No comments: 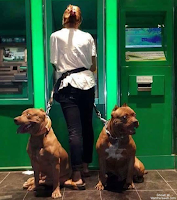 No trouble...  Debbie's friend never has any trouble when she goes to the ATM, as she brings along her Smith and Wesson.  Smith is on the left, Wesson on the right!
Posted by Unknown at (permalink) 4:23 AM No comments: