Israel Must Be Eliminated...

That headline, of course, is taken from Ahmadinejad's speech yesterday to the United Nation's General Assembly – that most disgusting and corrupt waste of space, oxygen, and energy on the planet.

The revolutionary government of Iran in general, and its president Ahmadinejad in particular, remind me very strongly of Hitler and Nazi Germany just before the onset of WWII.  Their shared hatred of Jews isn't even the main point of correlation there (though it is both striking and curious).  The correlation that concerns me most is how those two countries were able to accumuate frightening power that represents an existential threat to world peace, all while the rest of the world did nothing effective about it.

But what we really need, of course, is a credible counterpoint to Iran.  Not just words, which is really the only thing the world has on offer at the moment.  We need credible actions.  That is, of course, exactly what the world needed before Hitler started invading other countries.  Never happened.  It probably won't happen now, either.  There is one big difference between Hitler and Ahmadinejad, though: the latter will likely soon have nuclear weapons to threaten us with.

Charming.
Posted by Unknown at (permalink) 7:21 AM No comments:

A Tale of Two Doctors...


A Tale Of Two Doctors

Two patients limp into two different medical clinics with the same complaint. Both have trouble walking and appear to require hip surgery.

The FIRST patient is examined within the hour, is x-rayed the same day and has a time booked for surgery the following week.

The SECOND sees his family doctor after waiting 3 weeks for an appointment, then waits 8 weeks to see a specialist, then gets an x-ray, which isn't reviewed for another week and finally has his surgery scheduled for 6 months from then pending the review boards decision on his age and remaining value to society.

Why the different treatment for the two patients?

The FIRST is a Golden Retriever taken to a vet.

The SECOND is a Senior Citizen on Obama care...

In November if He and his Czars get another term, we'll all have to find a good vet.


We're in good shape – we have a great vet already...
Posted by Unknown at (permalink) 7:12 AM No comments:

Letter from a Soldier in Afghanistan...

Michael Yon has published (with permission) a letter from a soldier in Afghanistan to his father.  Yon (by email) said that he has verified its authenticity.  Assuming it's all true (and I'm afraid that's all too plausible), this is a damning revelation of a failure of our political leadership.  That means Obama, of course.  I reproduce it in its entirety, trusting that Mr. Yon's intent is to spread this word as far and wide as he can.

I am fed up. I cannot believe the lack of attention the recent changes in this war is receiving by the media or the country. I think I saw one thing on CNN about the following subject, but I had to dig extensively to find it. The purpose of this letter is to let you know of the garbage that our soldiers are going through right now. With this knowledge, I hope that you take action by writing your congressmen.

First, because of the recent green on blue incidents or "insider threats" as the new buzz phrase dictates, all coalition forces in Afghanistan have completely stopped partnering with the ANA, AUP, and ALP in order to prevent the death of anymore CF casualties by ANSF or Taliban disguised as them. This is also greatly spurred by President Karzi's indifferent attitude and lack of action to take measures to prevent further insider attacks.

Second, because of this massive change in policy (and complete change in mission) all U.S. forces are forbidden to actively patrol their AO and are to remain on their respective COPs/FOBs. There are only a few exceptions to this rule and they all pertain to "hardening" highway 1 in our AO. We have received orders that clearly state that all CF will no longer be allowed to drop air to ground munitions within the country of Afghanistan. This preempts Karzi's announcement that will be made shortly that states the above mentioned order, making it a tactical directive that he is ordering.

To the first point: Our mission in Afghanistan is to partner with the ANSF on all levels. Now the policy makers are telling us that we are not allowed to do that and further more we are to take immediate measures to secure ourselves from the ANSF that are co-located with us. So the question now becomes, what is our mission? Furthermore, the implication is that we have absolutely no reason to still be in this country if we are not partnering with the ANSF. So why are we here?

To the second point: I don't think that the American citizens would be happy if they knew that their soldiers were being prohibited from defending themselves in any way because of politically driven orders, but that is precisely what is happening in this war right now even as I write this letter. The soldiers of the U.S. never engage the enemy unless we know that we have will always have the tactical advantage in defending ourselves, that advantage is the use of close air support and air weapons team. To take those weapons away from us is to level the playing field for the enemy and thus exposing our soldiers to more danger. In the school house they teach us that the minimum ratio that we are to engage the enemy with, is a 3:1 ratio. In other words, we have the highest probability of winning because we don’t fight fair. The sound tactical principles behind this teaching have saved lives. The very presence of aircraft over our foot patrols has also saved lives and now our chain of command is being told by our political leadership that this is now not allowed. If we are not partnering with the ANSF and we are not actively patrolling to prevent our enemies from massing their attacks on our COP and we can’t drop a bomb on the enemy that we have positively identified, than what the hell are we doing here?

Give us a mission or send us home. I honestly have no preference on what the politicians decide, as long as they just make a decision. Of course this will be a terrible inconvenience on the current elections so I am sure we will be forgotten, which really does not seem to be too different for how things have been going for the last eleven years.

Do not buy into what the some media outlets have already said about this. Casually saying that this is a frequent occurrence is false, and is an attempt to downplay the major ramifications for these decisions. We have never been so restricted in defending ourselves as we have now. This is not just a stand down. The other implication of this decision is that we will perhaps never regain our relationship with the ANA after we have executed these measures to protect ourselves from them. Essentially, we have left them to die as we watch from our high-tech cameras and UAVs. They will not forget this and I fear the relationship will never be the same.

I love you very much Dad and I don’t want you to worry about me any more than you already are, but I also know that this has to be brought up, someone has to say something about this. It is wrong to keep this hidden away while American soldiers are under constant threat of death and dying. I don’t care if you send this letter directly, this needs to be known.

If You're in the Newspaper Business...

...it's time to be looking for another job.  The graph below shows the most abrupt decline of an entire major industry I've ever heard of: 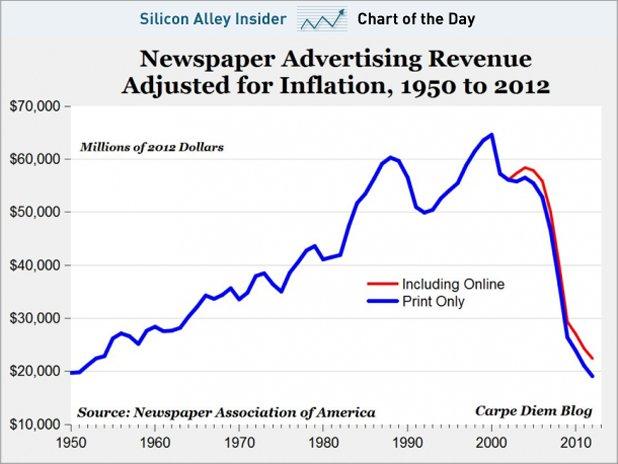 Posted by Unknown at (permalink) 7:02 AM No comments:

From Botany Photo of the Day, of course: 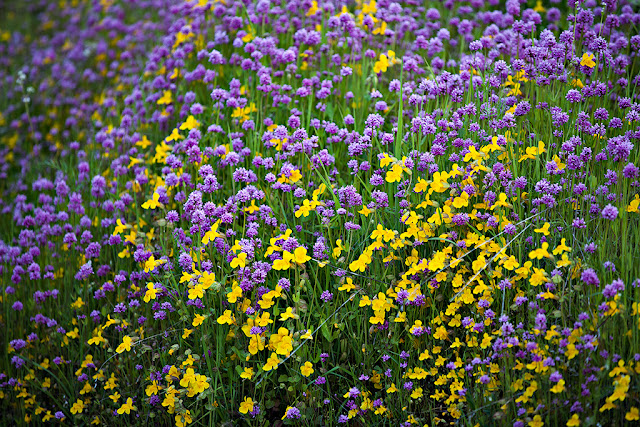