Earthquake in the U.K.!

Earthquake in the U.K.!  A political earthquake, that is – the one named Nigel Farage and his UKIP party.  I've been watching and reading his speeches for years.  The man makes a lot of sense, which is why I assumed he'd never actually succeed in politics.  The fact that he is succeeding, and in a big way, I find both surprising and uplifting.  Maybe it could happen here, too!
Posted by Unknown at (permalink) 8:33 AM No comments:

Newspaper slams Al Gore and his Arctic ice cap predictions...  What's this?  A newspaper reporting actual news?  Oh, it's a British paper, of course!
Posted by Unknown at (permalink) 8:31 AM No comments:

I had breakfast here this morning...

I had breakfast here this morning...  I took a moment to enjoy the mural on the north side of their building.  This video explains how that mural came about.

I've probably eaten at Angie's more than any other local eatery.  It's not the best food in town, and it doesn't have a fancy wine list or a romantic atmosphere.  So why do I go back there so often?  That's easy: friendly people, a welcoming and wholesome atmosphere, consistently good food that looks and tastes like something your mom made.  I'm particularly fond of their homemade soups, but there are a lot of things that I look forward to eating there.  I haven't yet had a disappointing meal.  The waitresses are a hoot.  Friendly locals are everywhere.  The guy who greets me at the door calls me “young man.”  And everybody there bends over backwards to make sure you're having a good experience...
Posted by Unknown at (permalink) 8:28 AM No comments:

Math is so hard! 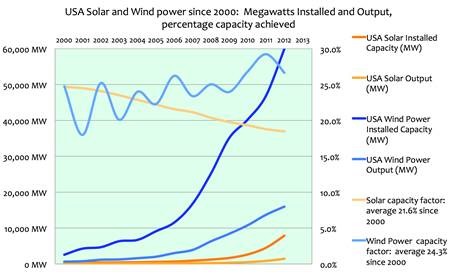 Math is so hard!  Well, if you're an environmental wacko, at least.  The “green” propaganda I've seen that promotes wind or solar power always compares the cost of installation based on the “nameplate” capacity of wind turbines or solar arrays (the maximum power they can generate under ideal conditions), not their actual contribution.  The same practice is used for conventional power stations, so one can argue (and the environmentalists do) that this is an apples-to-apples comparison –  but it's not.  The reason it's not is that wind and solar power outputs are determined by Mother Nature.  A wind turbine generates power at the whim of the winds, and a solar array is at the mercy of the daily sun cycle, clouds, snow, etc.  Conventional power plants don't have this problem – they generate power whenever we ask it of them.

The graph above right comes from an excellent post over at Watts Up With That, which goes into some detail about the actual contributions of wind and solar as compared with their nameplate capacities.  For the U.S., the average contributions have been running at just over 20% of the nameplate capacity.  That means if you want to generate one megawatt of solar power on average, you need to install five megawatts of solar panels.  The obvious corollary to this is that environmentalists have been badly underestimating the cost of replacing conventional power with “green” power – that's not a new observation, mind you, but here it is backed up with pesky actual data and experience...
Posted by Unknown at (permalink) 8:23 AM No comments:

What would it take for Romney to run again in 2016?

What would it take for Romney to run again in 2016?  Scott Ott has the inside scoop...
Posted by Unknown at (permalink) 8:09 AM No comments:

Who do terrorists fear most? Who do terrorists fear most?  One of the things learned by our “enhanced interrogation” of terrorists shortly after 9/11 was that the terrorists feared the U.S. Marines more than they did our special forces – much to the consternation of the special forces folks.  The attitude embodied in this sign speaks to why that might be.  Via friend, reader, and former colleague Simon M...
Posted by Unknown at (permalink) 8:08 AM No comments:

“It’s better to die on your feet than to live on your knees.”

“It’s better to die on your feet than to live on your knees.”  One of 40 Of The Most Bad-Ass, Masculine, Manly, Alpha Male Quotes Of All Time...
Posted by Unknown at (permalink) 8:05 AM No comments:

The fast way to peel an apple...

The fast way to peel an apple...  My grandmother had a beautiful cast iron gadget that worked on the same principle, except it was hand-cranked.  Ah, I found a photo of one just like hers, at left.

Can't you just see a rechargeable electric version of the old gadget?  Sounds like a Kickstarter project to me!
Posted by Unknown at (permalink) 8:02 AM No comments: