When we checked in for her appointment, we were surprised by a request to take more X-rays.  This request came before we'd even finished the check-in paperwork.  Though we'd brought our iPads so we could read while waiting, we never even got a chance to crack them open.  The MRI from last week was full of artifacts from the metal in Debbie's knee (we knew this already), so the surgeon wanted X-rays to get a good picture of her knee's current status.  These X-rays went quickly and easily, in no small part because of the kind and attentive work of the X-ray tech, a young lady named Brook.

As soon as we were done with the X-rays, we were scooted into the exam room, where we waited for about 10 seconds for the surgeon (Dr. Tom Higginbotham) to come in.  We'd not met him before, so we didn't know what to expect, though he was highly recommended to us by two friends in Paradise.  Within a few minutes, we knew we had a good 'un – he was cheerful, considerate of Debbie, full of information, and happily answered all our questions. But what he had to say quite surprised us!  While he acknowledged that the MRI shows a “slightly ratty” meniscus, he's not at all sure that's a problem.  And, more importantly, it's not the worst problem in her knee.  He said that the MRI also shows a fracture of her medial condyle (the knobby “knuckle” of the knee, one of two attached to each femur, or upper leg bone).  The fracture was just a hairline crack, and the X-rays confirmed that there was no displacement (bones shifting) at all.  The treatment for this is very simple: wait.  Wait for about six weeks post-injury, or about four weeks from now, before putting any weight on that leg.  No surgery required.

The way this fracture was diagnosed was interesting.  The MRI clearly shows the edema in her knee.  “Edema” is just a fancy word for swelling, in this case in her knee.  It was very evident indeed at the time the MRI was taken, and indeed it still is.  The MRI also shows that there were two kinds of liquid causing the edema.  One was liquid that was mostly water, but the other was a liquid that was mostly fat or oil, and it floated on top of the water (much like separated salad dressing).  The water-based liquid is mainly from blood or plasma, but what's the fatty liquid from?  Well, it turns out that the presence of such a fatty liquid is a signature of a fracture.  It's caused by bone marrow leaking out of the broken bone.  It was the presence of that fatty liquid that lead Dr. Higginbotham to search for the fracture, which was quite a subtle feature on the MRI (and didn't show up at all on the X-ray).

So now we have a follow-up appointment in mid-July, and between now and then she's going to be basically bedridden and helplessly dependent on me.  Which she hates, of course.  After she's all healed from this fracture, then we'll have another discussion with Dr. Higginbotham about whether to clean up that meniscus (and remove all the hardware)...
Posted by Unknown at (permalink) 5:28 PM No comments:

There are many ways...

There are many ways ... that people can demonstrate their craziness.  These two decided to do it by flying tandem through a hangar at 185 MPH.  I'll call that an effective demonstration!  Full screen it...
Posted by Unknown at (permalink) 11:23 AM No comments:

A big step in browser-as-a-platform...

A big step in browser-as-a-platform...  It's extraordinary to see such broad cooperation amongst browser makers.  It's almost like they understand the value of standards :)  Even Microsoft is participating, which makes me wonder if the end days are nigh.  In any case, if this standard is actually widely deployed, it means that soon the browser environment will not be strictly a JavaScript world – any programming language could be supported in a cross-browser way.  Watch out, operating systems!  Browsers will be the new applications platform...
Posted by Unknown at (permalink) 8:45 AM No comments:

Biological compass located...  It will be interesting to see if this same sensor can be found in higher animals...
Posted by Unknown at (permalink) 8:41 AM No comments:

An online plant identification service...  This is an amazing concept, a mix of automation and botanists identifying any plant from photographs, at a cost of about a dollar per identification.  I haven't tried it yet, but I am most definitely going to – I must have 50 plant species around here that I'd like to ID...
Posted by Unknown at (permalink) 8:39 AM No comments: M64: the black eye nebula...  Via APOD, of course.  Full resolution version here.
Posted by Unknown at (permalink) 8:37 AM No comments:

Progress in Paradise...  Today's the big day for Debbie.  We're off to see the surgeon today; it's the evaluation for her torn meniscus repair surgery. 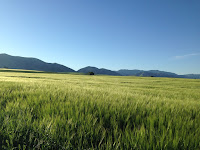 I went walking with the dogs early this morning.  Our routine walk (past the barley field at right) turned into something very non-routine, though, when Race decided to take off chasing voles through a just-mowed alfalfa field.  He ran about a mile north of me; I could hardly even make him out.  I tied Mo'i and Miki to a fence post and took off after Race.  Only by jogging about 3/4 of a mile could I get close enough for him to hear me, and even then he was reluctant to come to me.  I finally wrassled him into a leash – which is where he's going to stay.  Forever.

Our neighbor's 11 year old boy (Nicolas S.) and I helped our mutual neighbor Tim D. move his irrigation pipes this morning.  The pressure has been low for a couple days, but this morning it's back up, so Tim was eager to get his four strings of pipe up and running on his alfalfa.  He's also wetting down some mustard so that Nicolas and his siblings can pull it out later today.

Yesterday afternoon we took delivery of some carpet stair treads.  They're quite nicely made, and Debbie is very happy with the color and design.  I'll be installing them today and tomorrow...
Posted by Unknown at (permalink) 8:34 AM No comments:

I can't even imagine our dogs doing this!
Posted by Unknown at (permalink) 8:10 AM No comments: