...only much bigger, of course.  Perhaps with 16 bit registers and 32 bit accumulators!

How can you not love a place called “Evil Mad Scientist Laboratories”?
Posted by Unknown at (permalink) 3:25 AM 1 comment:

To myself and a few of my friends, the chart at right brings back a lot of memories.  We used to work for Stac (where the Stacker disk compression utility was developed).  In the early '90s, we noted the steep decline in the cost per megabyte of disk storage, and wondered what that meant to the future of disk compression.  We concluded that disk cost was trending toward free (quite rapidly!), and that when disks were free, the value of disk compression would approach zero.  Then we thought about the implications of “free” disk space, and what sort of software might leverage it.  We came up with the notion of backing up to disk (instead of the then-pervasive tape backup), and the idea of compressing the data from many computers through what is today called “de-duplication”.   Unfortunately for us, and for many reasons, we never figured out how to turn that idea into a lucrative business.

Here's something that looks very much like an updated version of the chart we created back in the early '90s: 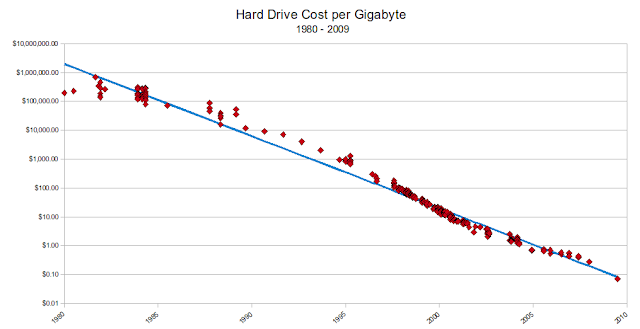 Matt Komorowski is the fellow who put this data together.  He also calculated the regression equation (at right).  He pointed me to another trove of data on historical disk storage costs.

Reading through all this stuff was a real trip down memory lane for me...
Posted by Unknown at (permalink) 3:17 AM 1 comment:

A nice video summary of one of my favorite robotic space explorers:

Posted by Unknown at (permalink) 2:58 AM No comments: