People ask me things...  Such as this, in my email this morning:


Have you ever actually fired a gun at someone?

But that's much different than saying my guns haven't been useful.

On two quite separate occasions, people believed they had a right to be on my property without my consent, and nothing I said could persuade them otherwise.  Simply picking up and racking my Beretta 12 gauge semi-automatic shotgun changed their mind, quickly and with no fuss.  In one case the time between racking and intruder exiting my property was well under 15 seconds, despite the roughly 100 feet that they had to traverse to get away from me.  Those unwelcome intruders have never returned, and I'm confident they will not :)

On one other occasion, I heard a commotion in our back yard that my sleep-addled brain interpreted as a mountain lion attacking our outdoor animals.  I grabbed that same shotgun and ran outside to defend them.  Without the shotgun, there's little I could have done to protect those animals against a mountain lion.  The noise turned out to be nothing concerning at all, which I was very glad for, as I'd hate to have to kill a mountain lion.  But I would have, if such had been needed, and I could have, thanks to that shotgun...
Posted by Unknown at (permalink) 1:15 PM No comments:

Spoons kill!  Via my lovely bride:


Today I swung my front door wide open and placed my Remington 870 right in the doorway. I gave it 5 shells, then left it alone and went about my business.

While I was gone, the mailman delivered my mail, the neighbor boy across the street mowed the yard, a girl walked her dog down the street, and quite a few cars stopped at the stop sign near the front of our house.

Later that day, I checked on the gun. It was still sitting there, right where I had left it. It hadn't moved itself outside. It certainly hadn't killed anyone, even with the numerous opportunities it had been presented to do so.

In fact, it hadn't even loaded itself. Well you can imagine my surprise, with all the media hype about how dangerous guns are and how they kill people. Either the media is wrong or I'm in possession of the laziest gun in the world.

Well, I'm off to check on my spoons. I hear they're making people fat.

Posted by Unknown at (permalink) 1:00 PM No comments:

Quote of the Day goes to Drew M., posting at Ace of Spades HQ, for this shocker:


Yeah he was awful but at least you never got the sense he was out and out anti-American. I simply can't say the same about Obama and his minions.

Ok, Drew, point taken.  But still, to hear a conservative say that...
Posted by Unknown at (permalink) 12:46 PM No comments:

Claude Moore Colonial Farm: 1, President StompyFoot: 0.  First they were amongst the collateral damage from the National Park closures.  Now they're open again, after the National Park Service changed their mind – for no discernible reason.

President StompyFoot's boot seems to be slipping off the peons' faces, just a little bit.  Lots of defiance in the news, especially from the West...
Posted by Unknown at (permalink) 12:39 PM No comments:

CoyoteBlog be hoppin'!  Warren Meyer, the proprietor of CoyoteBlog, has several fascinating posts just in the last day:

The True Poverty Rate looks at how our government deliberately distorts the reported poverty rate, primarily by ignoring all our major welfare programs.  This distorted view is then compared against other countries who report the data more accurately, thus making us look like pikers by comparison.

Capitalism is an Un-System talks about capitalism as an emergent, or self-assembling system.  It is not an “engineered” system dependent on bureaucracies for guidance.  A great many Americans really don't understand this, which is quite depressing to any libertarian like myself...

The Ignorance of Pundits eviscerates a recent writing of pundit Brad DeLong, using it as an apt example of the all-too-common punditus ignoramus.

All this from a guy trying to manage a business that the U.S. government is doing its best to screw up, in the course of conducting the shutdown theater...
Posted by Unknown at (permalink) 6:39 AM No comments:

Naiad lost, now found.  In 1989, the Voyager 2 robotic space probe discovered the inner-most moon of Neptune, dubbed Naiad.  After that, Earth-based observatories failed to find it – but now Naiad has been “found” again, in archival Hubble imagery.  It was about 80° ahead of its expected orbital position...
Posted by Unknown at (permalink) 6:29 AM No comments:


You know, on one level the government shutdown is the strangest story. Congressional Republicans didn’t want a shutdown—they wanted to ding ObamaCare without having one. Democrats did want a shutdown—they thought it would reveal the Republicans as crazy, irresponsible, at the mercy of their radical wing. That’s not what they said in public, but it’s how they thought things would play out.

The entire experience of the Obama administration seems like that: up is down, in is out, bad is good...
Posted by Unknown at (permalink) 6:22 AM No comments:

“It could be a breakthrough.”

“It could be a breakthrough.”  So says Paul Ryan, writing today in the Wall Street Journal.  He's talking about the currently-squandered opportunity for a meaningful budget agreement.  I'm not holding my breath on that one...
Posted by Unknown at (permalink) 6:19 AM No comments: 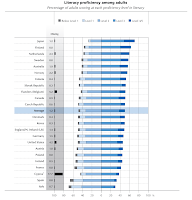 U.S. leading the way – to ignorance and inability.  In this study, performance of U.S. adults is exceptional only in the sense of how poorly we performed compared with other industrialized nations.  The entire study – almost 500 pages long – is online.  The summary makes sobering reading for any American.  If I were a parent, I'd be wondering if emigration was in order...
Posted by Unknown at (permalink) 5:30 AM No comments:

Parbuckling the Concordia.  Lots of great pictures in the article...
Posted by Unknown at (permalink) 5:18 AM No comments:

“Pathetic.”  Yesterday The One held a press conference and took questions, something that doesn't happen very often with him.  Considering all the current craziness with the government shutdown, the ObamaCare roll-out disaster, and the impending debt ceiling fight, you'd think the worshipers press corps would have some tough questions to ask.

You would be wrong.  There wasn't a single even interesting question asked, let along probing or tough ones.  As Brit Hume said: “Questions from WH press corps are pathetic. As of this moment, not a single tough or challenging inquiry.”  A dozen reporters were called on, and it was evident they were carefully selected to be reliable sycophants.

I'd give a lot to have the diverse, combative, competitive English press duplicated here.  Instead, our press is a bit like the California legislature: utterly dominated by like-thinking progressives who compete only in their adoration for The One.  That sort of monopoly is hard to break through...
Posted by Unknown at (permalink) 5:16 AM No comments:

ObamaCare fails – the list.
Posted by Unknown at (permalink) 5:01 AM No comments:

Extinct tree resurrected from 2,000 year old seed.  The Judean date palm, Phoenix dactlifera.  This plant has been nicknamed “Methuselah”...
Posted by Unknown at (permalink) 4:55 AM No comments:

Modular phone?  Friend, former colleague, and Idaho mogul Doug S. passes along the video at right that describes a proposed new mobile phone called “PhoneBloks”. It's a crowd-sourced project, currently looking for funding, and it's getting a lot of positive buzz.  The premise is that we all buy new smartphones in order to get a new feature or two, and then we end up throwing away our entire former phone.  The inventor of PhoneBloks says he has a better way: a modular phone that lets you replace just the component you want to upgrade, and keep the rest of your phone.  There are other benefits as well, most especially the ability to customize your phone to your own needs and desires.

I understand the sentiment that led the inventor down this path, but I'm skeptical that his approach will work. The biggest challenge will be cost.  First, making removable modules requires connectors and mechanical support that are expensive.  I can't see any way around that one.  Even worse for this sort of device, they add volume and weight.  Second, mobile phones as they are made today are marvels of high-volume production – they are incredibly inexpensive for what you're getting, and that is only possible because of astoundingly high volumes.  Devices like the iPhone sell by the million, and that extraordinarily high volume enables low cost production.  By making a modular phone, PhoneBloks is by definition lowering the production volume of each component – a guaranteed way to increase its cost.

I'm old enough to remember a similar evolutionary path with another familiar piece of electronics: televisions.  When I first got interested in electronics, televisions were huge pieces of furniture in the house, internally powered by tubes, and full of very complicated adjustments.  There was an entire industry of television repairmen, as those televisions were so expensive that repairing them – even with expensive, skilled labor – made good economic sense.  The same arguments being made for PhoneBloks were made for televisions, and indeed it was possible for a while to buy a “component television” system, where the tuner, audio amplifier, monitor, controls, etc. were all separate devices that came in several versions – quite analogous to the PhoneBloks concept.  But component television never went anywhere, as the television technology quickly advanced beyond anything the component makers imagined, obsoleting them entirely.  Furthermore, the volume of televisions being made went up dramatically, cost plunged, and the entire television repair industry folded up and went home.  Now we just throw away our old televisions and think nothing of it, and we expect each new one we buy to be better, bigger, and less expensive than our last one.