Back to the stairs project!

Back to the stairs project!  The stairs I'm building use a couple of “ribs” to hold up the big landing and the smaller stair.  These ribs will stand vertically, their bottom on the floor and their top inserted into a 1/2" deep slot routed in the bottoms of the redwood stairs.  I just finished fabricating the first one.

I started with a piece of redwood 2x12, cut to the right length on my chop saw.  Then I ripped it to the right maximum width on my table saw, and made the cuts that I could on my band saw.  The result is in the first photo below.  If you embiggen that one, you can see a couple of 1" cuts I made to make a notch – but the last cut (a 2 1/2" horizontal cut) there was no way to get the band saw in there.  I could have drilled a hole in there and then used the scroll saw, but that saw is not very good at straight lines (at least it isn't when I'm using it :).  So I decided to try chiseling that piece out, something I haven't done very often.  That's the middle photo, and it turned out to be much easier than I'd imagined it would be.  That notch will be invisible, so it didn't really have to be a nice straight line – but I'm glad it turned out that way anyhow.  The last photo shows the finished rib.  Now I need to make another one just like it... 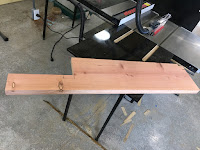 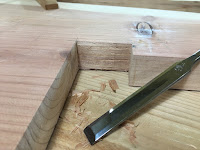 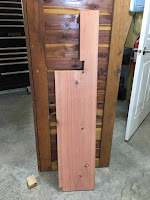 Posted by Unknown at (permalink) 9:57 AM No comments: 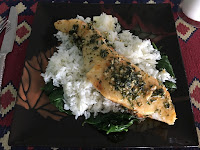 Paradise ponders, sea bass and spinach edition...  My beautiful bride fed us in style yesterday afternoon, with the dish at right.  That's fresh sea bass, grilled perfectly, with a lovely sauce over it, on rice and steamed spinach.  That was great!

We ended up not doing much yesterday. :)  Our main activity was watching a couple of episodes of Foyle's War, one of our all-time favorite TV series, and one of the very few that I actually enjoy watching...
Posted by Unknown at (permalink) 6:18 AM No comments:

I'm not really surprised...  But I do feel the doom coming on...
Posted by Unknown at (permalink) 6:00 AM No comments: