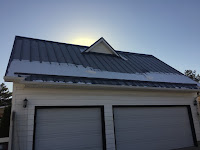 Paradise ponders, floods and snow stoppers edition...  On Thursday morning, before the latest snow melted, I snapped the photo at right.  It shows our garage with a bit of snow on its roof, and if you squint hard you can see that there's a (new) piece of metal extending horizontally, about a foot above the gutter.  That's a “snow stopper” for standing seam steel roofs, invented by one of the employees (Tyler) of the roofer who installed all my roofing.  When he described it to me, I was a bit skeptical of its efficacy – so I had him install one on my garage (my worst snow falling-off-the-roof problem) as an experiment.  If it works, I told him, I have several other places that I'd add it to.

Well, based on the first test – admittedly an easy one, as we only got a half inch of snow – it's working exactly as he told me it would.  The snow is stopped in its tracks, and only a little bit escapes through the inch or so high open area underneath it.  That open area also allows the melted snow trickle through into the gutter.  We'll see how it does with a heavy snow, but for the moment I'm much encouraged.  I'm going to love it if this really does keep the giant piles of snow from forming right in front of my garage door!

Debbie and I took a drive up Blacksmith Fork Canyon this morning, mainly to see the river.  It's just barely above flood stage right now.  The muddy river is violently boiling through normally sedate rapids.  There are a dozen or so spots where the river is over its banks and onto fields or pastures.  There's some visible damage – bank erosion, trees toppled, etc. – but less than I'd expect for the power of the water we see.  That foot bridge that I snapped a photo of a week ago is gone with nary a trace – even the abutments, such as they were, have vanished.
Posted by Unknown at (permalink) 12:00 PM No comments:

Paradise ponders, 1,200 miles of electrons edition...  Well, we rolled back into our garage late last night, after driving nearly 1,200 miles over the past two days.  For some reason I'm a little tired today. :)  We left home at 5 am on Tuesday, and pulled into our destination (Lazy K Wrought Iron's Kalispell shop) just under 12 hours later.

This trip was a bit of an experiment for us, to see if we liked traveling a long distance in our Model X.  The big question mark was how the charging stops we'd have to make would work out.  Bottom line: it was great, and we'll do it again without hesitation.  We knew that traveling in such a comfortable, quiet, easy-handling, fun-to-drive car car would be great.  We weren't so sure that we'd like the stops every couple hundred miles to charge the car, though.  We stopped four times on the way up to Kalispell: in Idaho Falls (Idaho) and in Lima, Butte, and Missoula (Montana).  The amount of time we stopped varied from about a half hour to just over an hour, depending on how much charge we needed in order to reach the next Tesla Supercharger. 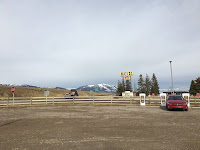 In the case of those particular Superchargers, there was something nearby to occupy our attention: a restaurant, a coffee shop, or the like.  I'm not sure if that's true for all Superchargers, but I wouldn't be surprised to find out that's true.  The Supercharger in Lima (at right) is in a tiny little town, but behind me was a restaurant (Jan's Cafe) that truckers seemed to favor.  We didn't eat there, but we noted that it got good reviews on both TripAdvisor and Yelp.  The other Superchargers were all in fairly large cities, with lots of possible charging-time activities within walking distance.

Each time we stopped for charging, we got out and walked around at the very least.  Often we grabbed something to eat or drink, and found a restroom.  This “stop every couple hundred miles or so” is not our usual traveling style when we're traveling to get someplace (as opposed to sightseeing).  For many years now, we've made high-speed dashes for long distances with very little stopping.  So this experience was a bit different for us, and ... we liked it.  It made the drive more relaxing and much less tedious.

Before this trip I spent some time with Tesla's Supercharger map and Google Maps, planning our route.  The tricky bit was trying to estimate how far our battery would take us, as I know it varies by what speed you're going, how much altitude change there is, what the temperature is, the wind, etc.  It's complicated!  Then when we started actually making the trip, I discovered completely by accident that the Tesla's navigation system does nearly all of this work for you – though not perfectly.  If I put our final destination in, the navigation system figures out all the Superchargers I'll need to stop at, and even tells me how long I have to stay there in order to get my charge up to snuff.  Very nice indeed!

But, as I mentioned previously, it's not a perfect system.  One thing in particular it seems to disregard is your speed.  I'm not sure what assumptions it makes, but it doesn't seem to take into account the high speed limit roads.  Several of the Interstates we took have 80 MPH speed limits, and that means the traffic was flowing along at about 85 MPH typically.  Aerodynamic drag on a car increases as the square of the speed, so the drag at 85 MPH is about double that at 60 MPH, and the drag probably dominates the power requirements for the motors at high speeds.  I suspect the navigation system simply assumes some fixed power consumption per mile, and when the road happens to be a high speed road, that estimate is considerably off.

So that meant we needed more charging than the navigation system estimated, which isn't really a big deal – those superchargers are fast.  But they're apparently not all created equal – our charging rate varied by about 2:1 from one Supercharger site to another.  I'm not sure why the rates varied, although some things I read this morning make me suspect that there was a partial failure in the lower speed ones we ran into.  It seems that the Supercharger equipment has a couple of levels of redundancy, including a modular approach that allows the charger to continue to work (albeit at lower speed) in the event of some kinds of electronics failures.  Slower charging is definitely better than no charging!

One thing we noted with a bit of surprise is that all eight of our charging stops (four up, four back), we were the only car charging.  We had been a bit worried about being delayed by a backlog of cars waiting to be charged, but that certainly wasn't an issue!  Each of the Supercharger sites we visited had eight charging stations, so at least at the moment there appears to be plenty of capacity.  I'm guessing that this is very dependent on exactly what route we're traveling, and probably on the time of day as well.

Another little imperfection in the navigation app took me a while to figure out: the navigation system didn't know about the existence of the Lima, Montana Supercharger site.  That led to it trying to route us from Butte to Idaho Falls, but at the 85 MPH speeds on that road the battery didn't have enough capacity to make it.  If we'd made that trip at 70 MPH, the car said we'd make it – but that would have been inconvenient, to say the least.  Fortunately I did know about the Lima Supercharger (from the Supercharger map on Tesla's web site), so I knew we could stop there. 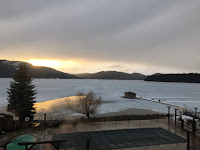 When we stopped at Lazy K's shop, we got to meet Kevin and Abigail, the couple who owns Lazy K and with whom we worked remotely to get our fireplace door and sun room casement window covers built.  They were as nice in person as they were with all our calls and emails!  We also met their daughter, who helped us load the covers into our car.  Then we traveled just a few miles more to Whitefish, Montana and up to the Lodge at Whitefish Lake.  Though we were only there for the night, we enjoyed the beautiful view from our room's window (at right) and the nice people who helped us.  We ate dinner at the Tupelo Grille, where we had a wonderful mahi mahi entree and a shared appetizer of ahi poke (poke in Montana – what a world!). 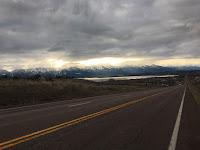 Then yesterday on the drive back, we had beautiful scenery all the way, like that at left.  Debbie spotted a couple of pronghorn antelope herds, which made her day.  Along the way we saw signs advertising a “testicle festival” – you know you're in the western U.S. when you see that!

When we finally rolled into our garage it was about 9 pm.  We were dismayed to see that our property was covered in a blanket of snow, but by the middle of the next day it was all gone.

The objective of the trip was to bring home our new casement window covers, and that we did.  I've unloaded them from the car and brought them into our sun room.  On Monday my brother Scott will be here, and with his help I'll put them in place.  They're just as beautiful as the photos we saw.  Once they're in place, I'll snap a photo and post it...
Posted by Unknown at (permalink) 11:34 AM No comments: