Paradise ponders, carrot ginger soup edition...  I spent a lot of my day catching up with paperwork, and that's on the agenda again for today.  Not exactly my favorite way to spend the day. :)

We had a few errands to run yesterday, including me getting a haircut and picking up some Christmas things.  Along the way we stopped in at Jack's, a favorite haunt of ours that we haven't been to in a long time.  The reason we haven't been there is that the two main items on the menu there (soup and pizza) are chock full of salt, which Debbie is minimizing.  These days she's got a lot more experience in salt avoidance, and we've learned that with careful selections on the menu she can minimize it.  She can have some salt, just not the dump-truck loads that she used to consume. So we wandered in, absorbing the wonderful smells coming from their wood-fired ovens, and looked over the specials board.  First thing we spotted: the soup of the day was carrot-ginger, and it seemed likely that would be sweet rather than salty (left photo, and it was not salty at all).  That's one she could try.  Then we found a pizza for her (their Cozumel, right photo) that would be relatively easy on the salt, and I got the special (a meat tower extravaganza, center).  Oh, yum!  That was so, so good! 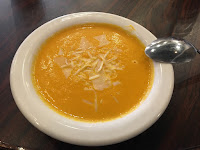 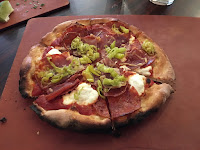 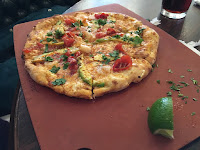 Later in the afternoon we were visited by Lee Atwood, a local cabinet maker who just happens to live in Paradise.  We asked him to make the cabinets for our new mud room, and he stopped by with a proposal and a price.  The price was fine, and we've asked him to take on the job.  He tells us that it should be installed sometime in January.  Woo hoo!  One of our rooms might actually get done sometime soon!

Actually, that might be two rooms.  The only thing remaining on the sun room now is the covers for the two basement window wells.  I fired off the measurements and some practical details to Lazy K Wrought Iron up in Kalispell, Montana, and now I'm waiting for a response from them.  If past experience is any guide, they'll have the covers finished within a month.  My plan is to drive up there to pick the up, making at two-day mini-vacation out of it.  Hopefully we can do that in the Model X.  If it gets here by then.  The last word I have from them is "around Christmas"...
Posted by Unknown at (permalink) 7:36 AM No comments: