A very nice day ... except for the three and a half hours I spent on the phone with the pharmacy our health insurance dictates that we use...

The good parts first: I feel much better today than yesterday, and that improvement started about noon yesterday.  Whatever bug I have seems to be losing the battle to my immune system.  Yay, immune system!  I did get a couple of hours of good work in on my Sisyphus table software, which I'm finding peculiarly satisfying.  I've always enjoyed writing software that makes things move in the physical world, and the Sisyphus table is a great example of such a thing.  The best part of yesterday, though, was the evening: Debbie and I went out for dinner to Jack's (our favorite pizza place here).  I had a bowl of cream of fire-roasted tomato soup for an appetizer, and it was heavenly – their soup chef is superb.  We shared a “cordon bleu” pizza – one of Jack's patented weird-but-great pizzas.  This one had roast chicken, ham, bacon, lots of veggies, a creamy white sauce, and lots of fresh mozzarella cheese.  Wonderful!  Then for dessert we split a piece of Jack's delicious lemon cake.  The cake itself is mildly lemony, but the frosting is perfection: not too sweet, not too much, and as tartly lemony as you can get short of chomping the actual fruit.  It's drizzled with a raspberry sauce, and accompanied by luscious raspberries and blueberries.  A treat and a half!  When we got home, we settled in to watch Ice Age 4, which I'm sure many of you would agree nicely matches our mental ages.  We laughed 'till we hurt. :)

Now the not-so-good part: this year we purchased a separate health insurance policy for Debbie, as I'm on Medicare and my child bride is not.  That means that this month we're going through all the pains of a policy transition.  One of those pains involves a $3,100 per month (for 24 months) prescription drug to treat Debbie's osteoporosis.  The hoops we have to jump through to get that prescription approved are formidable.  When we first got it approved, it took several weeks and several dozen phone calls, plus some obnoxiously persistent behavior on our part and by her doctor.  Then came the payment joys: her policy has an absurdly high deductible ($13,000 this year), so until we hit that it's all out of our pocket.  The pharmacy has to collect that deductible, and of course they don't have good information about when the deductible has been met (the information from the insurance company is always out of date).  Fortunately we have a great relationship with our local pharmacy, and they just trust us.  However, with the new policy this year, our local pharmacy is not “in network” – and for this particular drug, only one pharmacy is in network: a mail-order pharmacy run by Walgreens.  Those are the folks I was on the phone with yesterday, for three and a half hours in five separate calls.  There were two major hiccups.  The first involved (naturally) payment.  They had no information from the insurance company at all (and they're the mandated partner!).  That took three calls to straighten out.  The second problem was that they had the dosage wrong – someone had made a typo and had entered "60 mcg" instead of "20 mcg".  Now "mcg" is a microgram – one millionth of a gram, and a gram is one 454th of a pound.  A microgram is a tiny amount of that drug.  But that mistake (a) would have been three times what her doctor prescribed, and (b) would have cost $10,300 a month instead of $3,100.  The really scary part?  I'm the one who caught the error, when they were verifying the shipment contents to me.  Fixing that took two more phone calls, one of which was 90 minutes long and had me being transferred to pharmacists, doctors, managers, and clerks.  What a mess!  I'm so tired of dealing with this incredibly inefficient bureaucracy!  I want Amazon to get into the health care business (including pharmacies) and straighten this God-forsaken disaster out.  The government has had enough attempts at it.  Ask anyone who's dealt with the Veterans Administration how they like single-payer healthcare (assuming they survived, that is)... 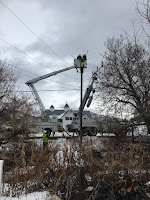 There was another interesting event yesterday: our local power company came and fixed an impending problem.  Some six months ago, one of their employees noted that the insulators on the wooden crossbar at the top of the pole in the photo were coming loose.  If they broke off, one of the high-voltage lines might break and fall off – shutting off power to everyone downstream of that break.  That would also be dangerous for anyone who happened to come in contact with the fallen line.  That pole is alongside our driveway, and is also the point where the power feed for our house and barn are connected.  Yesterday this job hit their schedule, and a surprisingly large crew showed up: three trucks, a car, four workers, a supervisor, and two flagmen.  They shut down one lane of the highway we're on for the two and a half hours it took them to make the repair.  They had some interesting equipment to make all this work.  One of the trucks had a cherry-picker that held up the wires as a kind of temporary pole.  It was fitted with a crossbar that held the wires a few feet from the real pole.  Then they disconnected our feed and the high-voltage wires from the old crossbar.  That's what they're doing in that photo.  The way they did this was awesomely low-tech: they used insulated poles with a metal hook on the end to unwind the wires that had been twisted together.  That took a tedious hour to do.  After that, they simply unscrewed the old crossbar and replaced it with a shiny new steel crossbar.  When they reconnected the wires, they did it with high-tech insulated clamps that got put into place in about one minute (and would come apart just as easily).  The supervisor told me that they had just started using these clamps: for the entire preceding history of electrification in Utah, the twisted wire approach has been in use.  I'd have guessed that problem would have been solved a long, long time ago...

While they were making this repair, our power was disconnected – for two and a half hours.  This provided a great test of our backup systems, and I'm delighted to say that they all worked flawlessly.  The backup generator for the house took 22 seconds to light off, and our solar panels were providing about 70% of the house power despite being slightly cloudy and with the sun low in the winter sky.  The backup generator for the barn took 24 seconds to light off, and the continuous UPS that powers all the computer equipment in my office handled that outage without missing a single cycle.  Our Internet connectivity was down for 87 seconds, mainly because the cable modem, routers, and switches had to reboot when the house generator kicked in.  We've only discovered two issues caused by the outage: all the digital clocks (dang them!) reset, and the disk drives for our Plex server had to be manually powered back on.  That latter problem may be fixable by a configuration on those drives.  The former problem I'm afraid we're stuck with.  Still, that's a pretty painless two-and-a-half hour power outage!
Posted by Unknown at (permalink) 5:53 AM No comments: