A day around Pahala and Na'alehu...

A day around Pahala and Na'alehu...  Today was partly a repeat of past favorite drives on this trip, and part exploring new territory.  Our complete track for the day is here if you want to follow our precise path.

The first thing we did this morning, at 5 am, was to head for Jaggar Center to see the eruption in Halemaumau Crater one last time.  Unfortunately the eruption was much less active this morning, so we just briefly watched a few little lava splashes.  While we were watching, someone else there started playing a flute, badly.  We have no idea why that person would choose to interrupt the silence that everyone else was enjoying, but he did.  That prompted us to leave, and let flute-boy play without us in the involuntary audience.

The new piece for the day was in the area north-northeast of Pahala.  There's a paved road that goes for miles back up the eastern slopes of Mauna Loa.  Despite our many visits to the Big Island over the years, we'd never known that area was there.  Most of the road traversed old sugar cane fields, much like on the Hamakua Coast.  Partway along that road is the Ka'u Coffee Mill visitor center, where we were the first people there this morning, and enjoyed a nice cup of coffee.  The drive in that area was both beautiful and full of birds, just as many (and of the same species) as we'd been seeing in the areas west of Pahala.

After that, we headed back to some drives we'd especially enjoyed in the areas west of Pahala and north of Na'alehu.  One thing we did in particular, though accidentally, was to drive across the rugged ford mentioned in an earlier post – but for which I forgot to take photos.  That issue is now rectified with the photos below and the short video at right, in which you can hear the crunch as I bottomed the truck on a protruding piece of lava.  Oops! :) 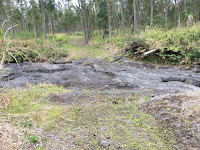 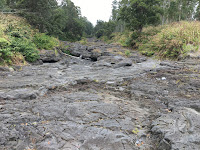 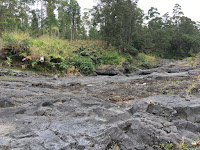 We saw a few new things this time, even though it's only been a few days since we were last here.  The “balloon plant” (my name) in the first photo was much in evidence this time, with those big (potato-sized) fruits that are basically a skin inflated with air, and a few small seeds in the middle.  Weird, they are!  The second photo is an orange wildflower that was common today.  We don't know whether it's an escaped horticultural, an introduced weed, or a native.  Whatever it is, it was darned pretty!  The butterfly in the third photo is, we think, a monarch butterfly.  These were somehow introduced to the Hawai'ian Islands, from which they can't possibly do their normal migration to Mexico.   The fourth photo shows something that looks a lot like the Indian Paintbrush we know from the mainland, but the leaves are all wrong.  No idea what it actually is.  Finally, the last photo is something that looks sort of like an orchid (from the flower), but the leaves don't look right.  We only saw one plant in all of our journeys this trip, so I suspect it's an escaped horticultural (though at that point on our drive we were several miles from the nearest house). 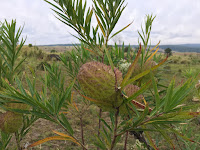 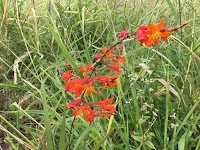 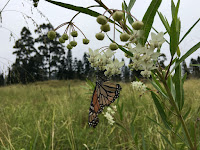 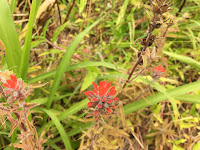 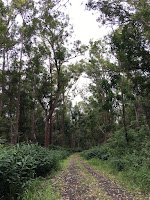 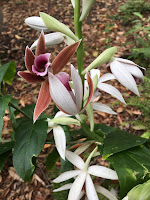 Last but certainly not least, in the afternoon we stopped at Hana Hou for the third time.  Once again we had a really good meal.  My starter – homemade corn and vegetable chowder – is in the first photo.  It was great: not too salty (my normal complaint with soup), full of nice sized chunks of local vegetables plus some new potatoes, and a luscious, thick broth that didn't taste of corn starch.  I believe they thickened it with a roux, and let the vegetable flavors shine.  The second photo was Debbie's entree, mere seconds before she started shoving it into her face and making yummy noises.  It's a crabcake sandwich, with local lettuce, tomato, and onion and homemade bread from their bakery.  Debbie had that thing entirely eaten before I was even halfway done with my meal. :)  The last photo is my entree: the “Hogzilla” (their name!).  This is a big tortilla stuffed with their wonderful roast pork, with a little cheese and jasmine rice in addition.  If you like roast pork, my recommendation is to order the Hogzilla – it's the same roast pork you'll find in their other pork entrees, but a larger (tending toward giant) portion.  No matter how hungry you are, you'll have trouble getting this whole thing into your belly! 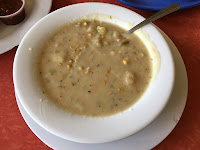 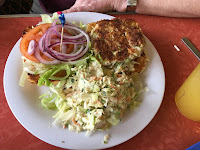 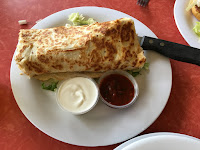 Finally, we went back to Ka Lae Coffee, another favorite place, and got ourselves some coffee.  Even though it was late afternoon, after my giant meal at Hana Hou I felt the need for some caffeine to stay alert on our drive home.

It was a nice, easy, peaceful day for us.  No traffic to fight, nearly our whole day in the boonies, and a fine meal.  What more could we ask?  Tomorrow is our last day here (sniff, sniff...), and for that day we're combining a bunch of favorite things: breakfast at Cafe 100, four-wheeling on the northern and eastern slopes of Mauna Kea, a short hike to the Douglas Memorial, a visit to The Gallery of Great Things (where we bought a small koa statue of a cat last week), and a meal at The Fish and the Hog in Waimea.  After that we head to the airport at Kona for our redeye home – it leaves at 10:25 pm.  We're going to be two tired and cranky puppies by the time we get home to Utah on Tuesday morning.  Luckily for us, a good friend who is very forgiving is picking us up at the airport in Salt Lake City. :)
Posted by Unknown at (permalink) 8:39 PM No comments: