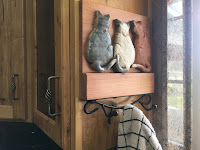 Paradise ponders, eyeball pressures and drained batteries edition...  But first: I stand accused of being an idiot, something I suspect is entirely possible.  The proximate cause of the accusation is that I failed to post a photo of the towel hanger in situ after I repaired it.  So ... there it is, at right.  Satisfied, accusers?

Some evil virus has invaded my body, and I've been feeling low the past few days.  Today, so far, is the worst of all.  Fever, sniffles, sneezes, and coughing – all the classic symptoms.  Sure don't like being sick...

I had my eyeballs examined today.  I've been going to see the optometrist roughly annually my entire adult life, even when I don't need a new prescription.  Mainly that's because glaucoma runs in my family, and if I'm going to get glaucoma, I want to know as early as possible.  My pressures today were 13 mm Hg, which is at the low end of normal.  Glaucoma is usually diagnosed by abnormally high pressures, so that was a relief.  Better yet, this past year my optometrist purchased an instrument that maps the thickness of the eye's retina.  Thinning indicates damage from a number of causes, including the two main ones that I'm worried about: glaucoma and macular degeneration.  I have no observable retinal thinning.  Yay!

But this time my visit was also prompted by problems I've been having with my vision, especially at close distances.  This is less worrisome (it happens to nearly everybody older than about 60) than it is simply a necessity for a new prescription.  When the optometrist did the refraction (to measure how my eyeballs were working), sure enough my prescription had significantly changed.  New glasses are now on order, and I've been advised to get very friendly with magnifying devices for closeup work.  Sigh.  Sometimes getting old isn't so much fun.  Beats the hell out of the alternative, though!

This afternoon I worked for a while taking down a barbed wire fence.  The fence actually belongs to Tim D., my friend and neighbor to the north.  He normally puts it up every fall and takes it down every spring, so that his horses can pasture in his alfalfa field after the last cutting.  Tim just had back surgery two weeks ago, though, and even the modest effort of taking down a fence line is more than he's allowed to attempt.  I needed that fence down so that a contractor working for me could get a skid-steer machine with a trencher through to Tim's field.  The east/west row of risers that currently goes through the middle of my back yard is coming out, and we're putting a new row of risers next to Tim's field.  He's the only one that needs them any more, so we're also going to adjust the riser spacing to be correct for his odd-shaped field.  He and I spent an hour or so just talking this afternoon.  I get a lot of pleasure from those conversations, and simply being able to help him a little – he was so much help for me when I was getting the barn built...

Debbie and I are making a two day trip starting early tomorrow morning.  I'm not taking my laptop, so there will be no blogging on those days.  We're headed up to Kalispell, Montana to pick up some iron work that the folks at Lazy K Wrought Iron did for us.  We'll be staying at the lodge on Whitefish Lake (just north of Kalispell) tomorrow morning.

One little added frisson to this trip will be that we're making it in the Tesla Model X.  This is far enough from home that we'll have to charge the car several times in each direction.  The Tesla superchargers are in all the right places, so I don't expect this to present any challenges.  Nevertheless, it feels like we're living a little dangerously having our electric car several hundred miles from home!  I'll let you know how this goes...
Posted by Unknown at (permalink) 2:07 PM No comments: