Debbie and I did a little local four-wheeling today, on a road that was new to us.  This doesn't happen all that often in San Diego County, as we know our local roads fairly well – so this trip was a bit of an adventure for us...

Our starting point was toward the north end of Pamo Valley, just north of Ramona.  This valley's floor is occupied by the aptly named Pamo Valley Ranch, an unexpectedly large cattle ranch located surprisingly close to urban areas.  Once you're in the valley, you could easily imagine that you're in some remote part of central California, as you're surrounded by hills, and the landscape is classic California riparian: oak and pasture.  There's not a bit of urburbia or suburbia in sight.  The last public turn off of Pamo Valley Road is on Forest Service road 11S01, otherwise known as the Lusardi Truck Trail.  This “road” is a bit rough, probably too much so for an ordinary car, but easily handled by our LandCruiser.  The photo at right shows 11S01 just after turning off Pamo Valley Road.

We were able to drive about 5.8 miles up the road.  The two side roads that actually went anywhere were gated off, and just before we left the National Forest, we were stopped by a “Gore gate” (so called because rumor has it that Al Gore's cousin in Tennessee got a lucrative contract for these things nationwide) on our road (at left).  It's frustrating to be stopped on public lands by these damned gates that started popping up about 10 years ago – it happens more and more these days.  But the trip we could make was very enjoyable.

That stretch of road alternates between lush oak-filled creek valleys (some still running, even in July) and wide-open dry chapparal hillsides with nice views.  Some of the creek valleys were wet enough to support willows, cottonwoods, and what looked like asparagus at a distance (poison oak kept us from getting close to these).  We also saw two beautiful fern-filled glens, alongside a flowing creek and still under the oaks.  There was a lot of bird life, including some cries that we couldn't identify; something new to us. 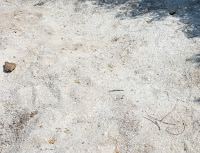 At one point, not far from the Pamo Valley side of this trip, we ran across a deposit of quartz chips.  We first noticed a bunch of white chips in the road, but then saw an area roughly 6' in diameter that was composed of nothing but these chips...

Since we had to turn around and go back to Pamo Valley (thanks, Al – NOT!), we took another road we knew: Black Mountain Truck Trail.  This leads out of Pamo Valley to its east, and winds up at Lake Sutherland, just north of Ramona.  This approach has you winding around a hill until suddenly you're looking at the downstream side of the large dam that formed Lake Sutherland – quite impressive, and the biggest dam I know of in San Diego County.  Here's a map showing our two routes today.

And of course there were flowers: 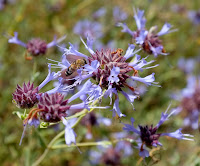 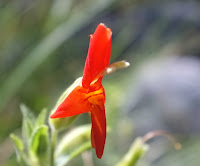 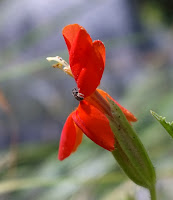 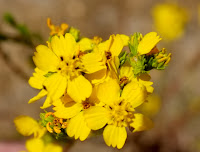 Posted by Unknown at (permalink) 5:57 PM No comments:

Myths of the American Revolution...

One of the things that fascinates me about reading history is the way each historian casts his or her own filters on their telling of the tale.  It's a rare historian who doesn't edit (especially by omission) the story to better fit their own notions and preconceptions.  The omitted bits often relate more of the objective reality of any particular historical event than the celebrated and generally recorded bits.  So I especially cherish those historical accounts whose very purpose is to relate those often omitted bits.  This article is of that genre, though I know (from other reading) that some of the “realities” mentioned are not particularly well documented, and may not actually be true.  It's still interesting reading, and provokes one to reflect about how history gets made...
Posted by Unknown at (permalink) 7:10 AM No comments:

July 4th, our Independence Day, is normally a day I would quietly celebrate.  I'm not feeling much like celebrating this year, for complicated reasons of which the recent ObamaCare decision is just part of.  If I was to try to summarize how I'm feeling, it might go like this: it feels like the Progressive movement is destroying the country whose independence I would celebrate.  My country.  It would be a bit like celebrating the birthday of a cherished dog – who was busy gnawing at my leg.  It's hard to celebrate under those circumstances...

But while I don't feel like celebrating, I haven't given up and I'm not feeling desperate.  I want my country back, and I know it's possible to do it.  This November is the big chance – not the last one, but the biggest evident opportunity.

I saw this video from Bill Whittle yesterday.  It's the closest thing I've seen or read to my own position.  I'm with Bill...