Obama is my shepard,
I shall not want.
He leadeth me beside still factories.
He restoreth my faith in the Republican Party.
He guideth me in the path of unemployment.
Yea, though I walk through the valley of the bread line,
I shall not go hungry.
Obama has anointed my income with taxes.
My expenses runneth over my income,
Surely, poverty and hard living will follow me all the days of my life.
The Democrats and I will live forever
in a rented home.
But I am glad I am an American,
I am glad that I am free.
But I wish that I was a dog,
and Obama was a tree.

Posted by Unknown at (permalink) 5:21 PM No comments:

Remember, today, those men and women who have given their lives that we might be free. Sullivan Ballou, killed in the first Battle of Bull Run (in the U.S. Civil War), was one of them...

Posted by Unknown at (permalink) 5:14 PM No comments:

Posted by Unknown at (permalink) 9:53 AM No comments: 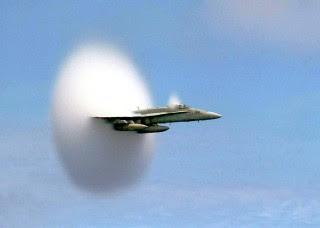 I'm sure most of you have seen this photo, or ones like it, showing a cone-shaped cloud of condensation around an aircraft. Some people I've met are skeptical that these photos are real; they suspect photoshopping.

There's a very detailed (but no heavy math) explanation here, and a Wikipedia page here.

But the real reason for this post is to point you to a web site that's chock full of beautiful photos of the Prandtl-Glauert Effect – the best collection I've found...
Posted by Unknown at (permalink) 7:01 AM No comments: 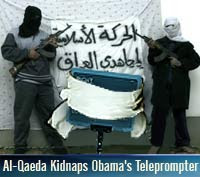 In this morning's news:

In an audacious raid Friday, al-Qaeda terrorists managed to slip past White House security and seize President Obama's teleprompter. Their demands were released in a grainy video, which apparently showed the president's teleprompter, bound and blindfolded but unharmed, while heavily armed masked men stood behind it, quoting from the Qur'an. The content of their demands is not being released.

"We need a verb!" shouted David Gregory of MSNBC.

An enjoyable bit of satire, that; courtesy of the folks at The People's Cube. At least, it was until I realized that I wasn't sure it was satire until I remembered what web site it was on...