Morning in Paradise...  Miki (already less resplendent), Race, and I took our usual morning walk, but it was harder than usual.  The air this morning is notably worse than yesterday; the smoke is now thick enough to feel raw on the throat, and it made my eyes water.  When we started out on our walk, the sun was over the Wasatch Mountains, but was a red ball so dim I could look directly at it.  By the time we were done with our walk, it was a bit brighter, but the day still looked like a heavily overcast day.  In the last photo you can't really see the Wellsville Mountains (west of us) at all, whereas normally they are so clearly visible you don't realize they're 15 to 20 miles away.  It will be nice indeed when this smoke clears off... 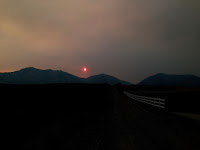 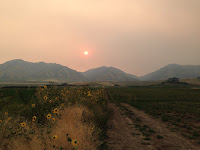 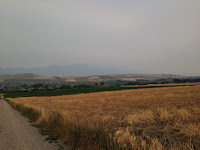 Posted by Unknown at (permalink) 12:03 PM No comments: 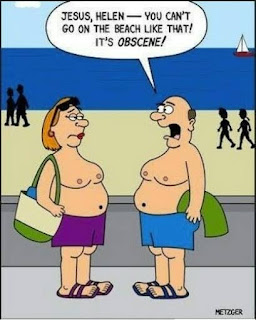 Why we should legalize murder for hire...

Why we should legalize murder for hire...  Excellent piece, but ... you have to read it to the very end to understand why I said that.  Via friend, former colleague, and dogged reader Doug W...
Posted by Unknown at (permalink) 6:18 AM No comments:

Ladybug takeoff...  I never knew their wings folded up like this!
Posted by Unknown at (permalink) 5:52 AM No comments:

Seen in an ad...  This appears in a free classified ad hosted by a local news web site.  The news site is trying to provide a useful service to its audience, but this kind of leech is taking advantage of it.  What makes me most sad about this is that ads for ludicrous, obviously fraudulent products like this must occasionally work – there's no other reason why anyone would bother to place them.  Most likely the person they do work with is the kind of person you'd least like to be victim to it: the elderly or weak of mind.  I've redacted the contact information, as I don't want to give this despicable parasite any additional exposure...

MAGIC WALLET TO GIVE YOU EVERY DAY
THIS IS A WELL DESIGNED ANCIENT MAGIC WALLET WITH ALL POWERS TO BRING YOU MONEY DAILY OR WEEKLY AND THIS MONEY CAN HELP YOU SOLVE YOUR BAD FINANCIAL SITUATION & INCREASE YOUR WEALTH THUS BECOMING THE HAPPIEST PERSON IN LIFE
CALL +xxxxxxxx
MAGIC RING TO SOLVE ALL YOUR PROBLEMS
THE POWERFUL BLACK MAGIC RING WITH ALL POWERS TO SOLVE YOUR PROBLEMS CALL +xxxxxxxx
This is the oldest powerful mystic ring organized by great magicians from the early (150-800BC)and it was made to be for the pharaohs and prophets of Egypt it has got powers from the Angels of the 7th planets . And the following are what this ring can do or has ; ( by ..+xxxxxxx.,profmaaxxxxx@gmail.com It can give success in love , Success in business Make you attractive to people Protects from the journey and home Make you do great miracles as you Protect you from evil powers,,water drawn, and fire won’t be able to harm you; its get promotions in any field you want Remember answers and pass exams Attracted Win lotteries It will move in you and into your blood think with and work with if you have it . Contact, Profmaamaamisa. +xxxxxxxx

Posted by Unknown at (permalink) 3:24 AM No comments:

Why should you be skeptical of climate models?

Why should you be skeptical of climate models?  One reason might be that a simple model (so simple you can do the math on a calculator or slide rule!) does a better job of predicting temperatures than any of the IPCC models...
Posted by Unknown at (permalink) 3:18 AM No comments:

Geek: evil code commit ... to make before you leave your job.  This assumes, of course, that you're willing to burn a lot of bridges, with geekly napalm.

The closest thing I've ever seen to this was a “code bomb” that an angry employee committed about a week before he left.  This was at an electronic stock trading company, and the code bomb added a random number of shares to an order, intermittently (a few times a day).  So, for instance, a trader might place an order to sell 1,000 shares of IBM, and it would be turned into an order to sell (say) 1,400 shares instead.  Fortunately we caught this during testing, before the software ever got released to a real trader.  That one could have been bad.  We just fixed it and moved on; the company never took any action against the ex-employee.  I don't think we ever even told him that we'd found his bomb...
Posted by Unknown at (permalink) 3:02 AM No comments:

Turkish is an interesting language in the first place...

Turkish is an interesting language in the first place ... with all sorts of unusual features.  I just ran across another reason why it's interesting: it has a whistled form for communications over long distances.  I've known several Turkish people over the years, and none of them ever mentioned this to me.  I only discovered it when reading a science news story about how the right hemisphere of the brain gets involved in this...
Posted by Unknown at (permalink) 2:56 AM No comments:

Superconductivity at -70°C!  I was all excited when I saw that headline – that's a far higher temperature than previously found.  Then I saw this little detail: the superconductivity occurs only at 1.5 million atmospheres of pressure.  Sheesh.  I won't be doing that at home anytime soon!
Posted by Unknown at (permalink) 2:49 AM No comments: