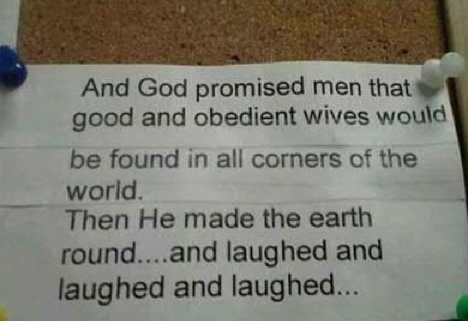 Posted by Unknown at (permalink) 9:58 AM No comments:


Once there was a little boy who lived in the country.

The family had to use an outhouse, and the little boy hated it because it was so hot in the summer and freezing cold in the winter and stank all the time.

The outhouse was sitting on the bank of a creek and the boy was determined that one day he would push that old outhouse straight into the creek.

One day after a spring rain, the creek was swollen so the little boy decided today was the day to push the outhouse into the creek.

He found a large stick and started pushing. Finally, the outhouse toppled into the creek and floated away.

That night his dad told him they were going to the woodshed after supper. Knowing that meant a spanking, the little boy asked why. The dad replied, "Someone pushed the outhouse into the creek today.It was you, wasn't it son?" The boy answered it was.

Then he thought a moment and said, "Dad, I read in school today that George Washington chopped down a cherry tree and didn't get into trouble because he told the truth."

Opening scene from HBO's new series The Newsroom. It's not exactly parroting the usual “Progressive” narrative:

Posted by Unknown at (permalink) 6:00 AM No comments:

Even Worse Than We Thought...

Many California state parks were permanently closed this year because there was no money in the budget to fund them.  Really what that means is that some politician decided that other things (say, the high-speed train to nowhere) was a more important priority.  This kind of brain-diseased budget prioritization is reason enough to leave California for some saner locale.

But today we learned that it's even worse than we thought.  The state parks system was sitting on $54 million in surplus funds while they were closing parks.  We also learned that they spent hundreds of thousands of dollars on a secret vacation buyout program.

Bureaucrats.
Tree.
Rope.
Some assembly required.
Posted by Unknown at (permalink) 5:49 AM No comments:

I have nothing to add to the discussion on the terribly sad events in Aurora, Colorado yesterday.  I will make one observation, though, on a related phenomenon that just floors me.  Every time there is an act of mass violence carried out using guns, there are (loud) cries from the Progressives of the world (Mayor “Nanny” Bloomberg, I'm looking at you!) for gun control.  Usually they mean that in an absolutist sense: they would like to completely remove the right of U.S. citizens to bear arms.  In other words, their reaction to the illegal use of guns is to outlaw guns altogether.

There are two parts of this reaction that I have trouble wrapping my brain around.

The first part is this: if someone is already willing to do something as vile (not to mention illegal) as murder, why on earth does anyone in their right mind think that making the purchase of guns illegal would deter them?  There is much evidence that it would not, starting with the many murders with guns committed in areas where guns are illegal (both in the U.S. and outside the U.S.).

The second part is this: how could anyone believe that we're better off – by any measure at all – having our citizens be disarmed in the face of those willing to commit violence?

Ideologies that promote gun control are, I think, self-extincting.  If they ever come to power, those with (illegal) guns will make sure that doesn't last long...
Posted by Unknown at (permalink) 5:44 AM No comments: