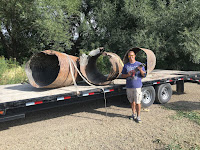 Victory!  Yesterday afternoon I watched our sprinkler contractor load a giant steel culvert onto his trailer for transport to the metal recycling facility in town.  This is the culvert I had photographed a few days ago, after Mark first extracted it from the ground where it was 3/4 buried.  Yesterday his sidekick Dave (photo at right) took a battery-powered Sawzall and cut it into three sections (on a single charge, no less!).  These were small enough for Mark to lift with his skid-steer, to get the dirt out.  Then he could lift and transport them to his trailer.  I'll find out tomorrow what price they fetched, but I'm guessing not much – steel prices are pretty low right now.  Too bad they weren't copper! :)

Anyhow, it's just great to get that eyesore out of the ground.  Even though it's a long way from our house, just knowing it was there was irritating.  It was actually quite close (less than 50 ft) from one of our neighbors' homes, so hopefully they're happy to have it gone...
Posted by Unknown at (permalink) 5:34 AM No comments: 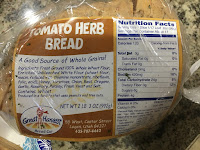 We've discovered a new bread...  This one – tomato herb bread – is from Great Harvest, in downtown Logan, where we did some bread shopping yesterday (and practically filled our freezer with fresh loaves!).  When we picked up our bread, these had just come out of the oven, and the aroma was irresistible.  Debbie and I both had a slice as soon as we got home.  Then we tried toasting it, and it's clear this will be one of our favorite toasting breads.  Several of the breads from Great Harvest have turned out to be terrific as toast – Cache Crunch and their raisin bread are two of my other favorites for toasting (and Cache Crunch makes a great sandwich, too).

We frequently reflect on the generally higher quality of food here as compared with San Diego.  Baked goods are one of the more extreme examples of this.  In San Diego, we only knew a couple of places to get good bread (Dudley's Bakery in the mountains was the standout, even though it was 30 miles from San Diego).  There were a few restaurants that had consistently good bread, too (such as the Fish Market with their sourdough).  Here we have three outstanding dedicated bakeries in Logan – all three with excellent bread, one with sublime classic pastries, another with local pastry favorites, and all three with great cookies, cakes, and biscotti.  On top of that bounty, we have two grocery stores with in-store bakeries that aren't bad at all – and with particular items (like the cheese-onion rolls from Macey's) that are high on our list of favorites.  If we venture further afield, there are even more choices.  At the time we chose Cache Valley as the place we'd spend our retirement, we had no idea at all that we'd find such great food here.  In fact, we worried that the opposite would be true – that the great restaurants we loved in San Diego would be but memories.  Oh, how wrong we were!  And happily so!
Posted by Unknown at (permalink) 5:22 AM No comments:

The banana game...  We have a ritual every morning in our house, and I've probably mentioned it before.  We call it the “banana game”.  A few years ago we discovered that our dogs (all four of them!) absolutely love bananas – and bananas are actually good for them.  Sometime after that I started getting in the habit of feeding slices of a banana to them in the morning, right after I got up and went to the kitchen.  I have a particular place in the kitchen where I stand to do this.  It didn't take long for the dogs to associate me standing in that place with delicious banana treats descending from the sky. :)

But over time they've learned earlier and earlier indications that banana slices are imminent.  First they learned that I would peel the banana in the kitchen sink, so they'd all sit next to me and watch, rapturously.  Then they learned that I removed one banana from the bunch first, and they'd start getting excited if I just moved in the general direction of the banana bunch (and trust me, they know exactly where that is!).  This morning I noticed a new observation on their part: they've learned that when I pull a steak knife out of its block in the morning, the next step is the banana separation.  I think they may have reached the limit here, because so far as I know there's no earlier indicator in my banana slicing pattern.  This morning I had four sets of doggie eyeballs watching my every move starting the moment I slid that steak knife out of the block and ending when I started tossing banana slices at them.

They have a similar sensitivity to my pattern of feeding them.  It starts every morning when I pick up Mako and Cabo's food bowls – plain stainless steel bowls that we store on top of Mako's crate.  The instant I pick those up, all four dogs know that there is kibble in their immediate future.  Judging from their reaction, that's the highlight of their entire day!  :)
Posted by Unknown at (permalink) 5:09 AM No comments:

And now for something completely different: socks...

And now for something completely different: socks.  Yes, socks.  Those things that you (probably) are wearing on your feet.

For about a bazillion years, I bought the de facto male standard: white cotton crew socks, generally some department store brand, or Hanes, or some such thing.  Price was a big part of the buying decision, as these things wore out fast (I think I averaged about 3 or 4 months for a pair); most of the socks I purchased were a buck or two a pair.  Then a few years ago I bought a package of Carhartt crew socks.  At $5 a pair, these were considerably more expensive than what I had been buying.  They were also more comfortable, and longer lasting.  After a year of wearing them it was clear that the Carhartt socks were actually costing me less than the ones I had been buying, as they lasted about a year.  So I switched my sock drawer to Carhartts.

Then a couple years ago I decided to try a pair of much more expensive socks.  I'd spotted them on Amazon, noted the great reviews, and decided just to try them. At nearly $13 a pair, they were roughly the same price as a dozen of the socks I used to buy – they'd have to be practically magical to be worth it to me.  But for $13 I thought I'd splurge and give them a spin.

Well, the short version of the result is that after a few months of occasionally wearing them, I bought 10 pairs.  That was about a year ago.  Why?  First and foremost: they're extremely comfortable for me.  They never bunch up inside my shoes like all my other socks did.  They're warm in the winter, and not particularly hot in the summer.  The elastic is powerful (which my dad would have hated!), and I like that because it keeps the upper part of the sock up on my leg, not rolling down into my ankle.  Plus after a few months with that one pair I couldn't detect any wear at all!

Now it's been just a year since I bought the ten pairs.  Some of those pairs have been worn much more often than others.  My sock drawer is basically a last-in, first-out (LIFO) queue – so some of those pairs (at the front of the sock drawer) have been worn probably 50 times, while others (at the back) just a few.  I cannot detect any wear on any of those socks.  The elastic is as strong as the day I bought them.  There are no tears, no holes, no visible wear of any kind.  So far as I can tell, I've got another year of use from these socks ahead of me, and likely even more.  I still find them as comfortable as I did before – and on the rare occasions when I run out of clean Wigwams and wear a pair of my Carhartt crew socks ... I'm aware of the relative discomfort all day.

I count these as a good investment, one that I certainly didn't expect!
Posted by Unknown at (permalink) 4:57 AM No comments:

A happy discovery upon awakening this morning...

A happy discovery upon awakening this morning ... my cold (or flu?) is nearly gone!  In particular, the fever has completely subsided and I now have more than four or five neurons firing.  What a great feeling!  The only bad part is that my lovely bride – who caught this evil thing before I did – is still suffering from it...
Posted by Unknown at (permalink) 4:33 AM No comments: