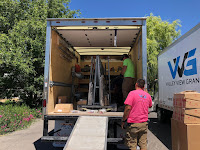 Some mixed granite news...  The granite folks showed up to install the granite on the cabinet that I built, right on time.  It was exciting to see them arrive – four guys in two trucks (at right), with our rock and all the tools they'd need to install it.  They unloaded the seven individual pieces of rock and carried them all over to my cabinet – and a few minutes later, we had set the grill components in place to test the fit.  It was perfect (photos below)! 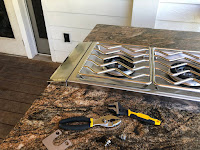 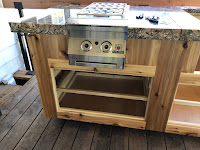 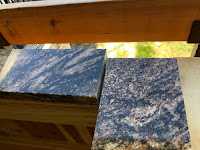 Take a gander at the photo at right.  The piece on the right is supposed to be about 1.5" longer, to match the rear edge of the piece at left.  The fabricators simply cut that piece too short.  The installers have saws, so if the piece had been too long they could have shortened it.  They did not, however, have a rock stretcher – so this means a do-over on that one piece, and that they couldn't actually complete the installation today.  They did leave enough of the rock in place so that we can get our gas installation completed tomorrow – and after that there's nothing stopping her from starting to grill again.  She's been waiting for this day for four years now.  I predict much grilled food in our immediate future! 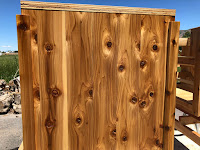 Here's a gratuitous photo showing one end of the cabinet, before we moved it to the deck.  The spar varnish did a great job of making the color variations, grain, and knots “pop” visually.  I hope it's as durable as I was promised!
Posted by Unknown at (permalink) 4:19 PM No comments: 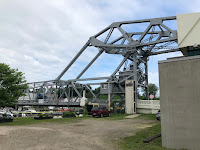 Day 5...  Niagara Falls!  Debbie had never seen the falls before, so I laid out our trip to give us a few hours there.  We drove most of the way from Ashtabula to Niagara Falls along the shore of Lake Erie, through a series of waterfront towns.  In Ashtabula itself, we drove over this really old-school draw bridge.  The controls have been updated to something a bit more modern, with computers and everything – but the mechanics are straight out of the start of the 20th century.

As we passed by Erie, Pennsylvania on I-90, just east of the intersection with I-79, we spotted a cemetery that stood out for the flags that appeared to be on every grave, along with a profusion of fresh flowers.  We got off the freeway and found a road that would take us there, and we spent a half hour or so just walking around (photos below).  Something we've both noted in our travels (including a ridiculous amount of international business travel for me) is that different places have very different notions of how to honor or maintain graves, especially of military veterans or casualties.  Even different places in the U.S. differ greatly.  For example, in San Diego (where we used to live, and with a large military presence), the beautiful veteran's cemetery on Point Loma is meticulously maintained, but there's little evidence of visitors – every time I've visited I've been nearly on my own.  In much of Utah, the situation is virtually reversed: even the non-military cemeteries are well maintained, and a high proportion of graves have fresh flowers, carefully maintained greenery, and often a flag or other patriotic symbol.  Most of the U.S., in our experience, is somewhere in between – with urban areas tending toward the rarely visited side, and rural areas the opposite.  This was a veteran's cemetery, and it was obviously visited very often (we had trouble finding even one withered vase of flowers).  There was a relatively large and well-equipped staff there to tend it.  The oldest graves I found in my walking were from WW I veterans; some were just days old.  I find such places very moving, and all too rare (both here and in other countries).  Some big exceptions: Japan, South Korea, and Estonia.  I'm sure there are others, but those three I have quite a bit of experience in. 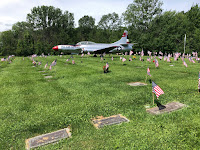 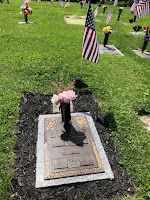 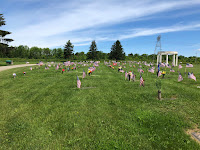 We settled into our B&B quite early in the afternoon, and set out to walk all around Niagara Falls.  This turned out to be about 3.5 miles of walking all together – more than Debbie has done in several years because of her knee injuries.  First up: some videos I made from three different viewing points: 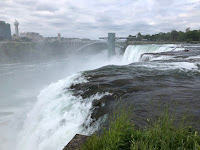 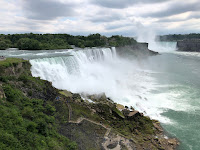 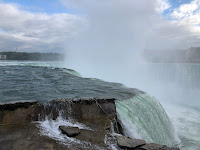 Walking around Niagara Falls – which I last visited nearly 50 years ago – was quite the shock for me.  The changes in the area are stunning, most especially on the Canadian side.  I was not prepared for the high-rise hotels, giant casinos, and the thousands of visitors.  Despite this, our viewing of the falls was actually better than it was all those years ago, because a ginormous platform has been built over the river that lets you walk to a perfect viewing position, high in the air.  It cost a whole $2.50 for the two of us to gain admission to that, and it was well worth the money.  The trails that lead around to the upper end of each of the falls are now paved and graded for wheelchairs – so walking to all of them wasn't much different than walking on a sidewalk in the big city.  There were crowds of visitors everywhere we went, even on the longest of the trails (which wasn't actually very long at all).  At a guess, I'd say two thirds of the visitors were foreign, dominated by Japanese and Chinese.

We ate dinner partway through our walking, at a restaurant called Savor.  It was just wonderful (photos of our meal below).  Debbie had two appetizers instead of an entree: a rather spectacular salad, and some excellent mussels.  I had a mixed seafood and pasta dish in an absolutely delightful sauce.  Our excellent and very entertaining waiter talked us into dessert even though we were both quite full – and we were very glad he did.  The chocolate cake with unsweetened whipped cream (whipped to the just-shy-of-butter point) was insanely good.  We departed with zero hunger, big smiles on our faces, and very, very happy tummies... 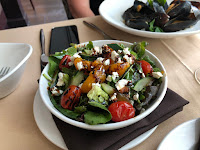 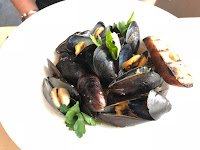 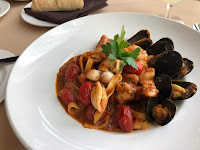 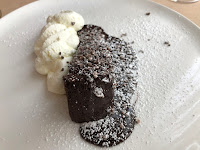 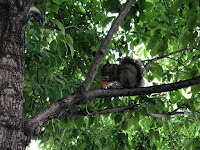 While walking around downtown, we spotted the little guy at right up in a tree (actually, just outside the restaurant's doors).  He's got a cupcake wrapper in his paws that he'd stolen from a (still occupied!) table nearby – the people at the table never saw him do it.  We don't have any squirrels or chipmunks in the valley where we live, and we miss their antics! 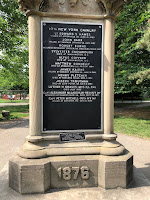 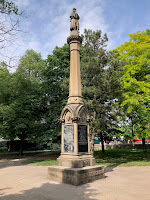 To my great surprise, Debbie wanted to walk some more after our dinner.  Some of our falls viewing was during this walk.  We also ran across some old monuments, one of which is at left.  There were probably a dozen or so in all the places we walked.  It is pleasant to see them in a location where so many people pass by, even if few people stop to look.

All in all, it was a very enjoyable day.  We walked back, finally, to our B&B and went straight to bed – we have a long drive ahead of us tomorrow...
Posted by Unknown at (permalink) 4:01 PM No comments: