Imagine a thick steel sphere whose interior is just 6 feet (2 meters) in diameter.  Imagine shoehorning yourself, a companion, and a whole bunch of equipment into this tiny space.  Then imagine that steel sphere is attached to a submarine.  You're floating just a few feet under the surface when something goes horribly wrong, and your now-broken submarine breaks free of the cable holding it near the surface and it plunges toward the bottom, about 1/3 of a mile (1,580 feet, or 480 meters) below.  As your steel sphere – the only thing keeping you alive – rushes down at speeds reaching 40 mph (60 k/h).  You have almost a minute to prepare yourself before it his the bottom, but when it does hit all hell breaks loose.  Your submarine embeds itself in a shallow gully on the bottom.  Equipment and supplies are all over the place, but you and your companion survive.  You have oxygen sufficient for just 72 hours of life, but basically everything else about your submarine is broken.  There's no way you can do anything at all that could get you back to the ocean surface.  What do you do now? 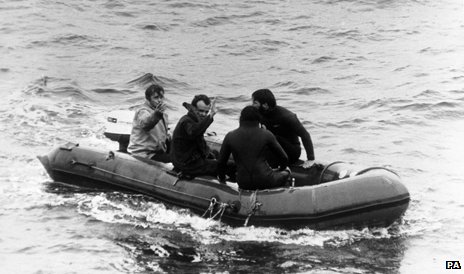 This really happened forty years ago, in August 1973.  I remember it well, especially the timing (just a couple of weeks after the last U.S. combat activity in the Vietnam War).  The plight of the two men trapped deep underwater made news headlines all around the world.  After an international effort got the right equipment and men to the scene, the helpless submariners were rescued.  When they were finally back on the surface and cracked their hatch, they had just 12 minutes of oxygen left.  It was that close.  I know that Hollywood would have made it 12 seconds, but in real life...that is really, really close to the edge.  The photo at right was taken just after a raft picked them up from their sphere...
Posted by Unknown at (permalink) 7:34 PM No comments:

Bigger than the Grand Canyon, this one was just discovered under Greenland's icecap:

We're a long way from knowing even our own planet very well.  Other planets (and even more so other stars) we've just barely scratched the surface.  Literally...
Posted by Unknown at (permalink) 7:17 PM No comments:

This is the inaugaral post of a new series: SilghtlyLoony's Links.  They can be on any topic, are not necessarily safe for work, and might induce uncontrollable laughter or chuckling.  Or they might piss you off.

Turns out you can infer the value Obamacare places on your life.

Maybe that's how we are now (Peggy Noonan).

Version control for writers or groups of writers.

Mars may have enabled the creation of life on Earth.
Posted by Unknown at (permalink) 12:20 PM No comments:

I returned home last night from my trip to Virgina to visit my folks.  It's always good to get back home after a trip, and the more trips I make, the more true that is... 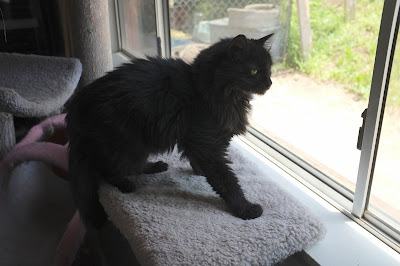 Debbie had a difficult day yesterday: our oldest cat (Pana, at right) had reached the point where it was time to say good bye, and Debbie had to both make the decision and act on it in my absence.  Tough for her, but she did it.  We've waited too long for some of other other animals, and have regretted it for years afterward; she was determined not to let that happen again.  And she didn't.  Little Pana was between 22 and 24 years old, a small all-black cat that was likely part Turkish (because he liked to play in water) that we rescued when he was quite young.  He had a long, happy, and safe life in our home...

This morning I did all my usual chores, then fired up our Kubota diesel tractor for another one: digging a grave for little Pana.  I was surprised when the tractor fired right up, as I hadn't started it for over a year.  But start it did, on the first turn of the starter.  Then I lifted the front bucket and the rear backhoe bucket and started moving toward the grave site.  Moments later I was swarmed with yellow-jackets, especially on my right hand.

They were in full “defend the nest” mode, stinging away as fast as they could.  I got stung quite a few times on my right hand and arm, twice above my right eye, and several times on my back and rear end.  Ouch!  I jumped off the tractor, leaving it running, and ran far enough away to escape the horde of angry yellow-jackets, then killed all the ones still stinging me.

The last time I had something like that happen to me was when I was a child – as an adult, I've only had one or two stings at a time.  I was worried what sort of reaction I might have to so many stings, but now (two hours later) all I have is some localized swelling.  My hand is by far the worst, but I expect it to go down within a few hours.  I've taken Benadryl and iced the hand; all the advice I can find on the web says those are really all I need to do.  Then wait :)

I found the reason why those yellow-jackets were so mad at me: they had constructed a nest under the left rear tractor tire.  When I moved the tractor, I ripped the roof right off their nest.  If some monster came along and ripped the roof off my house, I'd be pissed off, too.  I'd probably let him have it with my “stinger” (in my case, a semi-automatic 12 gauge shotgun).  Tonight, assuming it gets cool enough to slow the yellow-jackets down, I will destroy their nest.

I don't think I'll leave my tractor parked quite such a long time again :)
Posted by Unknown at (permalink) 9:44 AM No comments: